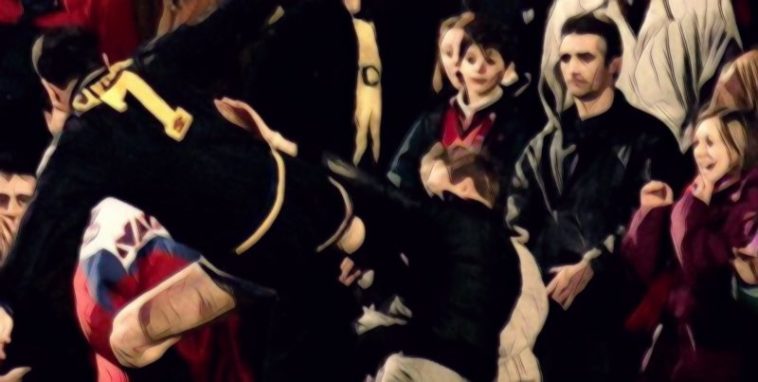 Football photography has managed to capture some of the most memorable and iconic moments in the sport’s history in a way that has ensured they remain imprinted on our minds forevermore.

As they say, a picture is worth a thousand words, so we’ve picked out some of the greatest Premier League images, in chronological order, for your perusal.

40 of the most iconic Premier League photos from the 90’s:

The end of a legacy

The Nottingham Forest fans and management team grimace as Sheffield United condemn them to relegation on 1 May 1992.

Clough bids one last fond farewell to the Forest faithful.

Revisiting the 92/93 Premier League Team of the Year

Man United finally do it

Eric Cantona is mobbed by United fans as they celebrate their league victory on the final day of the season at Wimbledon.

Liverpool goalkeeper Bruce Grobbelaar looks on in a snow shower during a 3-0 defeat against Newcastle at St James’ Park in November, 1993.

Best view in the house

A seated steward allows young Man City fans stand outside an opened gate to view the match at Maine Road to watch Manchester City take on Southampton in December 1993.

Liverpool fans watch on as their side faces Norwich City on 30 April 1994, the final day of the famous Spion Kop as a standing terrace.

Blackburn Rovers player Colin Hendry sports a huge cut on his forehead while Arsenal defender Lee Dixon checks up on him in August 1994.

Stan Collymore of Nottingham Forest pulls a face after scoring against QPR in October 1994.

Perhaps the iconic image of nineties football: Eric Cantona kicking Crystal Palace fan Matthew Simmons, who had been using abusive language towards the Frenchman. Simmons received a suspended jail sentence in 2011 for attacking the coach of his son’s football team.

ON THIS DAY: In 1995, Eric Cantona kung-fu kicked a fan during Manchester United's 1-1 draw vs. Crystal Palace. pic.twitter.com/eyOyWhD1pA

Cantona and manager Alex Ferguson at a media conference after an FA disciplinary hearing following the incident. The striker had originally been sent off for kicking Palace player Richard Shaw during the match in February 1995.

Look at all that denim.

Forest fans invade the pitch after the match against Wimbledon at Selhurst Park in May 1995.

Alan Shearer is crowned a champion after winning the Premier League title with Blackburn Rovers on the final day of the season at Anfield in May 1995.

Wimbledon stand-in goalkeeper Vinnie Jones taunts the Newcastle fans in the Gallowgate end after taking over the gloves during a Premier League match in October 1995. The Magpies won 6-1.

Chelsea vice-chairman Matthew Harding sits among the fans during a match between the Blues and Tottenham Hotspur in November 1995. Harding had been banned from the director’s box by the unpopular chairman Ken Bates, despite the fact that it was Harding’s money that funded the purchase of several players and the rebuilding of the North Stand. Harding perished in 1996 after his helicopter crashed on the way back from a match against Bolton Wanderers.

Five of the best independent football podcast to listen to

David Beckham was sure proud of himself after scoring from the halfway line for Manchester United against Wimbledon at Selhurst Park in August 1996.

Five of the best football television adverts ever

Phillipe Albert of Newcastle is confronted by Middlesbrough playmaker Juninho during a Premier League match at St.James’s Park in Nov 1996. Newcastle won 3-1.

How Juninho overcame the ‘monstrous cold’ to become a Boro legend

Fabrizio Ravanelli of Middlesbrough celebrates scoring in his trademark fashion after scoring against Manchester United at the Riverside stadium in November 1996. The match ended in a 2-2 draw.

Back of the net

Arsenal striker Ian Wright runs into the back of the net during a match against Southampton at Highbury in December 1996, which the Gunners won 3-1.

Newcastle fan throws his shirt onto manager Kenny Dalglish’s head as Newcastle fall 3-0 down to Liverpool at Anfield on 10 March 1997.

Derby County goalkeeper Mart Poom takes a goal kick during a match against Coventry City at Pride Park in November 1997. The Rams won the match 3-1.

The first ever African footballer to feature in the Premier League

Coventry midfielder Gordon Strachan argues with defender Tony Adams as Steve Bould looks on during a match against Arsenal at Highfield Road in April 1997. The game ended 1-1.

Dennis Bergkamp completes one of the greatest hat-tricks in Premier League history as Leicester City goalkeeper Kasey Keller fails to stop the Arsenal forward’s effort at Filbert Street in August 1997.

Manchester United goalkeeper Peter Schmeichel shouts to (or perhaps at) his teammates during a match against Leeds United at Elland Road in September 1997. Leeds won the match 1-0.

Ian Wright leaps for the ball in a match against Blackburn Rovers at Highbury Stadium in December 1997. Arsenal lost 3-1

Leicester City goalkeeper Kasey Keller tries desperately to stop the ball going in after teammate Gary Walsh over hits a back pass to him in a game against Arsenal in December 1997, but to no avail. The Gunners won 2-1.

He’s done it this time

Tony Adams celebrates with open arms after scoring the final goal in Arsenal’s 4-0 Premier League victory over Everton at Highbury in May 1998, sealing the title for the Gunners.

Fans use any vantage point to watch match between Leicester City and Arsenal at Filbert Street in September 1998. The game ended 1-1.

Ron Atkinson is mocked by Arsenal fans after sitting in the wrong dugout before his first game in charge of Nottingham Forest at the City Ground in January 1999. Arsenal won 1-0.

In April of 1999, Robbie Fowler is pulled away by teammate Steve McManaman after mimicking snorting a line of cocaine to celebrate his first goal against Everton at Anfield. The Reds striker had been “a target for unfounded allegations of drug-taking” at the time. Liverpool won 3-2.

The most iconic goal celebrations of the Premier League era

Mass dejection from the Arsenal fans who hold their heads in their hands on the North Bank as the title slips away from their grasp on the final day of the 1998/99 season.

Manchester United strike partners Andy Cole and Dwight Yorke celebrate winning the title following a 2-1 over Tottenham Hotspur at Old Trafford on 16 May 1999.

End of the Ruud

A dejected Ruud Gullit as his side go 2-1 down during the Newcastle United versus Sunderland match at St James’s Park on 5 August 1999. The Dutchman infamously benched Alan Shearer and Duncan Ferguson for the game, and was subsequently sacked.

Five high profile managers who flopped in the Premier League

Man United’s goalkeeper Massimo Taibi lets in Chelsea’s fifth and final goal during a rout in October 1999. The Italian didn’t last much longer at the club after that.

See Also: Five of the worst football television adverts ever