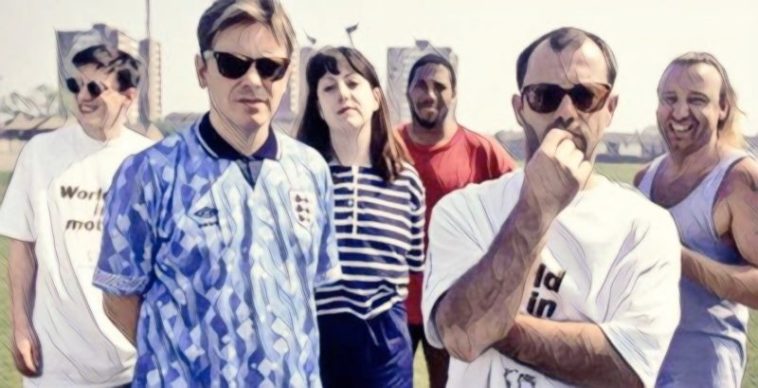 A music scholar once wrote, the art of song writing can be broken down into three essential building blocks: ‘Lyrics, Chords and Melody’.

Over the decades the music charts have been infiltrated on occasion by footballers, we think of Paul Gascoigne crowing about ‘the Fog on the Tyne’, Chris Waddle and Glenn Hoddle struck by ‘Diamond Lights’ and Andy Cole’s song ‘Outstanding’ which featured gold-plated lyrics such as ‘Tell the World my name, who’s that? Andy Cole”.

Independent music is sometimes described as a process which includes an autonomous ‘do-it-yourself’ approach in recording and publishing, where the finished article is created without the backing of commercial record labels. With labels such as Sun Records, King Records and Stax Independent music prospered in rock and roll 1950’s America, leading to the genre ‘Indie’.

In the UK with the advent of ‘Punk’ Independent music thrived with legendary labels such as Rough Trade, Cherry Red, Factory and Creation springing up throughout the 1970’s and 80’s. Many of the songwriters and bands who signed with Independent labels delved into their favourite pastime ‘football’ in their musical writings.

Below we look at the story behind 6 Indie Football Tunes which will have you foot-tapping….

1. Sultans of Ping F.C. – I’m in Love with a Football Hooligan

The Sultans of Ping F.C. formed in 1988, a quartet of ‘Evil Sex Punks’ who took cross-dressing and PVC trousers into the concert halls of Ireland and the UK.

This garrulous Irish gang from the rebel county of Cork, consisted of four friends; Niall Flaherty, Pat O’Connell, Paul Fennelly and Morty McCarthy, who struck a sonic posture somewhere between the New York Dolls and The Clash.

Drummer McCarthy was an avid Cork City fan sporting their colours for many of the band’s concerts and music videos. Football was referenced in many of their songs including ‘Kick me with your leather boots’ with references to Brazil’s great 1970 World Cup side, while ‘Give Him a Ball’ consists of many of Brian Clough’s famous quotes with a salute to legendary Notts Forest winger John Robertson.

However, their romantic tale about football violence with an opening line of ‘West Ham, Millwall, Chelsea..’ tops the lot, paying homage to those who spent Saturday afternoons ‘jibbing’ on the national train lines in the UK with the idea of storming the home end’s terrace just for fun.

With the era of the new shiny Premier League, this is a lyrical tale from a bygone era…

We give you ‘I’m in Love with a Football Hooligan’.

2. Half Man Half Biscuit – Gubba Look-a-Likes

In reference to their Liverpudlian neighbours the Beatles, Half Man Half Biscuit describe themselves as four lads who shook the Wirral.

The lads turned down a live performance on Channel 4’s Tube programme, hosted by Jools Holland and Paula Yates to go and watch their beloved Tranmere Rovers F.C.

John Peel of the BBC who would be inundated with requests for him to play HMHB tracks on his show, once stated ‘I’ve said it before a national treasure, there’s no question about it. When I die. I want them buried with me’.

The band encompassed a wide variety of style from country to rock and their love and knowledge of the beautiful game came across in tunes such as ‘All I Want for Christmas is a Dukla Prague shirt’, the referee’s alphabet and a salute to the greatest football anchor-man, Match of the Day’s Bob Wilson, before the bland Gary Lineker and Alan Shearer took over.

By far though their greatest football tune is dedicated to former British football commentator Tony Gubba, who commentated on eight seasons of ITV’s Dancing on Ice.

Gubba covered every World Cup from 1974 to 2006 for the BBC before his passing in 2013. The lads from the Wirral describe a nightmarish scenario through song where everybody looks like their favourite commentator Tony Gubba….

Peter Knowles was a footballer who turned to God, Knowles played at Molineux from 1962-70 playing 172 times for the Wolves notching up over 100 goals in all competitions.

During his career he guested for Kansas City Spurs one summer, and while in the United States he became a Jehovah Witness and announced his retirement from football.

Knowles announced his retirement in 1970 but remained on contract at the club until 1982, with the club’s different manager’s praying Knowles would walk back through the door, but he never returned.

Billy Bragg is a left leaning socialist singer who for over 30 years has been involved with grassroots political movements, often reflected in his lyrics.

For his tune ‘God’s Footballer’ Bragg turned to Knowles story….

In 2005 the late, great Mark. E. Smith fulfilled a lifetime achievement by reading out the football results on the BBC. Smith was lead singer with Mancunian outfit ‘The Fall’ who had a cult following throughout their existence, a passionate Man City fan, their music championed the cause of the working man in the North of England.

In his book ‘Renegade’ Smith outlines his thoughts on this: ‘The working class and the real upper class have a lot in common. They know where they’re from, they like a drink and have a sense of humour. It’s the middle you have to watch out for’.

The Fall’s ‘Theme from Sparta F.C.’ is used on the BBC’s Final Score show and the songs lyrics are written from the perspective of Greek football fans, who have a totally different outlook on the game compared to their British and Irish counterparts.

In 1994 Manchester Indie band ‘James’ recorded a song called ‘Goal, Goal, Goal’ ahead of the World Cup, stating this would be England’s song of choice for the tournament.

Alas, Graham Taylor and the three lions’ players didn’t read the script and England failed to qualify for the USA World Cup. Taylor’s famous quote ‘Do I not like that?’ following a defeat to the Dutch in qualifying, hit like a knife to the heart for the band, as the single was never released.

From the ashes of Joy Division came New Order a band combining the melancholy punk duels with euphoric disco.

New Order’s last single on Factory Records, a label which was the brainwave of the late Tony Wilson – he of the film 24-hour party people – was England’s 1990 World Cup song.

A glorious rendition helped by the fact England qualified for the semi-finals of the tournament, their best achievement in International football since 1966.

This coupled with, in the same year, the Ecstasy culture reaching saturation point in the UK, this football dance hit ‘World in Motion’ had them grooving throughout Italia ’90 and beyond.

Then Liverpool & England winger John Barnes with his incredible rap provided the most credible musical contribution of a sportsman seen since dart player Jocky Wilson stood side by side with Dexys Midnight Runners.