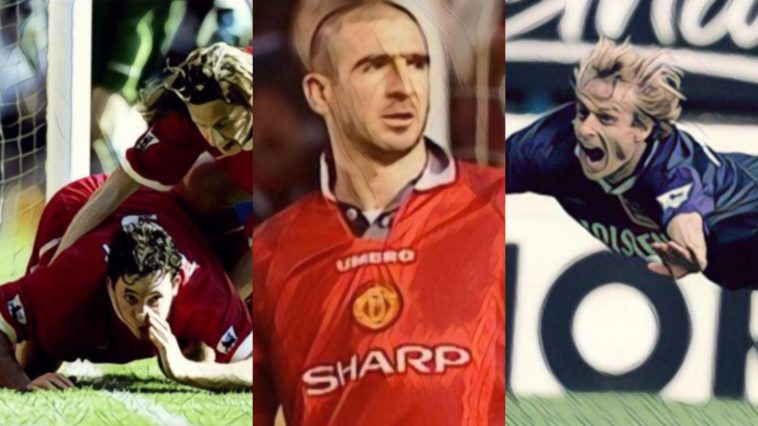 Some goals are as famous for how they are celebrated as they are for the quality, and in some cases the celebrations are even more synonymous with a classic footballing moment.

There have been a lot of memorable celebrations during the Premier League era, but some have reached iconic status over the years. They stick in the minds of football fans, resonating with our nostalgic souls for long after they have happened.

The most iconic goal celebrations in Premier League history:

There was a lot of hype surrounding the arrival of Jurgen Klinsmann to Tottenham Hotspur from Monaco in 1994, but there was some pushback too. The striker had, after all, garnered a reputation for himself as a notorious diver, particularly during the 1990 World Cup.

In an effort to own his own narrative, he asked the assembled media at his first press conference, “are there any diving schools in London?” On top of that, Teddy Sheringham suggested doing a Swan Dive that the entire team would join in on when he scored his first goal, which is exactly what happened when he found the net in seven-goal thriller against Sheffield Wednesday.

As discussed on the Klinsmann episode of our 90’s Football Hall of Fame podcast with Daniel Storey, the celebration isn’t just iconic because of how it looked, but because it killed two narratives in one fell swoop: 1) that he was a cheating diver, and 2) that he couldn’t possibly have a sense of humour because he’s German.

From then on ‘Klinsi’ was a media darling – no mean feat with the English press corps during that period – as he went on to become a Spurs cult hero, scoring 29 goals in all competitions that season.

Klinsmann’s time in English football will forever be associated with the Swan Dive though, which also inspired every football mad child across the country at the time to suffer from tummy aches from recreating it.

Eric Cantona – The King And His Court

Eric Cantona did very many special things during his time at Manchester United, but perhaps the most iconic was his sensational strike against Sunderland, followed by a celebration that only he could pull off.

In December 1996 the Frenchman picked the ball up near the halfway line before dribbling forward and exchanging a one-two with Brian McClair. When he receives the ball back, he chips the onrushing Sunderland goalkeeper and former Nimes teammate Lionel Perez and it goes in off the post.

The chip.
The celebration.
The King.

The celebration was even more nonchalant than the goal itself, Cantona turning in a full circle while peacocking, as he watches the crowd erupt in joy at his brilliance.

“That’s the biggest humiliation for a goalkeeper, and this kind of celebration too,” Cantona later recalled. “Because he’s angry and you don’t run anywhere.

Moments that made the Premier League: Man United snare Cantona from Leeds

Tony Adams – Drinking In The Moment

When we think of league-clinching goals, our mind immediately casts back to Sergio Aguero’s dramatic last-second strike in 2012. For some it will be Sylvain Wiltord’s decider at Old Trafford in 2002, or for those of a certain vintage it will be Andrew Cole’s delightful chip to seal the deal on the final day in 1999.

The Gunners had the chance to win the title in early May 1998 and did so in emphatic fashion by beating Everton 4-0 at Highbury. The centre-back scored the final goal, ensuring the trophy would reside in North London.

On this day in 1998, Mr @Arsenal Tony Adams scored this goal against Everton. Was this his best moment for the club?https://t.co/rtmy9MexYw

Mr. Arsenal stretched his arms out, closed his eyes and basked in the glory of it all, safe in the knowledge that he was now a Premier League champion.

The question has to be asked, though: what was Adams doing that far up the pitch? What right did he have to hit the ball so cleanly with his weaker foot? And to top it all off, he had the look of a man to whom it was absolutely no bother. Commentator Martin Tyler’s line “WOULD YOU BELIEVE IT?!” was the perfect backdrop.

There is no way to describe the entire scene other than iconic.

For a match that features wonder strikes from Olivier Dacourt, Patrick Berger and Francis Jeffers, the Merseyside Derby at Anfield in the 1998/99 season is remembered for one thing and one thing only: Robbie Fowler’s celebration.

Future World Cup-winning defender Marco Materazzi clumsily took down Liverpool midfielder Paul Ince in the box, giving Fowler the opportunity to equalise from the spot. After dispatching the penalty, the striker knelt down in front of the Everton supporters, put a finger to his left nostril and crawled along the touchline while pretending to sniff it, as if he was snorting a line of cocaine.

The Reds won the encounter 3-2, the first time in five years they had beaten the Toffees, but Fowler inevitably regretted celebrating the goal in the way that he did and apologised “unequivocally”. According to the Independent at the time, the scouser had been “a target for unfounded allegations of drug-taking.”

“I have been greatly distressed and hurt over the last few years by the constant allegations levelled against me regarding drug use,” Fowler said in a statement, “which have not only affected me but have been very upsetting to my family as well.

It’s worthy of iconic status, but it also carries the ignominy of being arguably the most outrageous celebration in the league’s near thirty year history.

The story of Michael Owen and how career trajectory alters perceptions

You ever break up with someone and you want them to see just how well you’re doing without them? That was probably the mindset of Emmanuel Adebayor when he faced his former side Arsenal as a Manchester City player in 2009.

The Toga international had just moved to the newly mega rich club for a £25m transfer fee after four years in North London and was out to destroy the team he once played for. He perhaps took it a little too literally, mind, when he seemingly stamped on the hand of Robin van Persie and put the boot in on Cesc Fabregas.

That meant Adebayor could consider himself very lucky to still be on the pitch when he scored City’s third goal that day, which he celebrated by quite literally running the length of the pitch just so he could rub it in the faces of the visiting supporters.

“The adrenaline” is what made Adebayor do it, he explained in 2018. “Afterwards, I got told the English FA wanted to give me a nice fine, but even if I would have had to pay €2m, considering what I went through, I would have still done it.

“When I slide on my knees, arms wide in front of the fans, I felt untouchable. People were throwing everything: phone, bottles of water. I never flinched. Everything flew past me. Pew, pew, like in the movies!”

“It was like having a sensation of being in prison for so many years and suddenly being told: ‘Brother, take the door and leave. Now, you are free’. That’s what I felt, a deliverance.”

Read: Remembering every noughties Goal of the Season winner