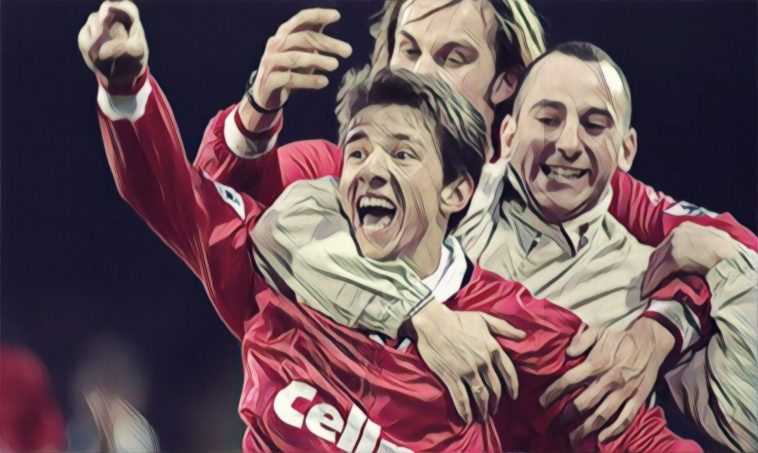 There was fervent excitement among the throngs of supporters who greeted Juninho upon his arrival to the tropical north east of England.

Thousands of Middlesbrough fans filed into the Riverside Stadium in October 1995 to catch a glimpse of their new £4.75m signing, who arrived wearing a suit jacket tailored for someone much larger than himself. There were drums, Brazilian flags and a raucous ovation to greet him.

For the people of Middlesbrough this was a momentous occasion worthy of celebrating. The area had suffered through the Thatcher era like much of northern England in the eighties, and the club itself had come scarily close to liquidation and going out of business altogether. A decade later they were welcoming one of the most exciting South American prospects in football.

English audiences had seen The Little Fella in action that summer for Brazil in the Umbro Cup, a mini warm-up tournament that was held a year out from Euro 96. Juninho scored a free-kick for the Selecao in a 3-1 win over England at Wembley to secure the trophy, a little taster of what he would bring to the Premier League.

Just months later he was seated in front of the assembled press fielding questions about how he would cope with the cold weather in the north east. The task was made no easier by a translator who seemingly wasn’t up to the job, doing things like mixing up the word for beans with pheasant.

They managed to get through the first press conference at the club at least, where he is inevitably asked about dealing with the cold wintry months in this part of the world. “It’s not Siberia” is his retort, adding that he’s been asked this question so much that he’s expecting “a monstrous cold”.

The climate quickly impressed itself upon Juninho, who later said “it was so freezing cold that I couldn’t feel my feet – I had to put pieces of newspaper inside my boots to help warm them up. I also had to wear one of those ninja caps that leave just the eyes showing.”

The weather was no object to him in the end, though, even if he did have a quiet first season. Other players may have wilted at that point, but despite his samba style and skillful nature, there is an underlying toughness and grit to him. This is probably best evidenced in a famous image from a Tyne-Tees Derby where the diminutive playmaker squares up to Newcastle United’s domineering Belgian defender Philippe Albert. This was, after all, a man who had to fight even harder for his place in the game given his small stature, despite his naturally gifted talents.

That, and his artistry with the ball, made him an instant hero at Boro, but it was in his second season in England where he fully justified the hype, securing his legendary status. If the excitement of the previous year was at an unprecedented level, then the next campaign somehow took it up another notch. The club added Italian striker Fabrizio Ravanelli and Brazilian midfielder Emerson to a squad that already had the likes of Jan Age Fjortoft (who was sold to Sheffield United mid-season), Robbie Mustoe, Curtis Fleming, Craig Hignett and Clayton Blackmore.

A spectacular opening day 3-3 draw with Liverpool seemingly set the tone for the season: this side would take it to anyone and entertain the masses at the same time. The game is mostly remembered for Ravanelli’s hat-trick and one of the greatest debuts in Premier League history, but it was Juninho who ran the show that day, putting in a veritable man of the match performance with his exquisite playmaking.

Although Boro reached two cup finals that season, losing both to Leicester City and Chelsea respectively, they ended up having one of the most bizarre, unique and heart-breaking campaigns ever seen. Even with the star names they acquired, the team couldn’t buy consistency, going on a 12-match winless run between September and Boxing Day. They surged in the run-in, losing just twice in the final 12 matches, but a points deduction for postponing a game with Blackburn Rovers was their ultimate undoing; they were relegated on the final after drawing with Leeds United, two points from safety, having been docked three points by the FA.

And yet, amidst all this, Juninho’s class shone through nonetheless. His tally of 12 goals and four assists only tells part of the story, as he made many a defender look foolish with his splendid passing, trickery and mesmerising dribbling. When he faced that year’s Premier League champions, the Manchester United defence couldn’t contain him in another famous 3-3 draw. The respect from his fellow peers was clear, winning the Premier League Player of the Year award for the 1996-97 season – the only player on a relegated team ever to do so.

It was inevitable he would leave after that season in order to ensure his place in Brazil’s World Cup squad for France ’98, but he has since admitted to regretting that decision. “If I could go back in time and change one thing about my career, I wouldn’t have left England at this moment,” he told FourFourTwo in 2018. “Maybe I wouldn’t stay at Middlesbrough, but I’d move to another Premier League side.”

Juninho ended up missing that tournament after being on the receiving end of a leg-breaking tackle from Celta Vigo’s Michel Salgado, and it took him “nearly two years to get back to my best after that.” he earned his way back in for the 2002 squad and, although he isn’t the most synonymous name with that side, his World Cup winner’s medal feels like a satisfying solution.

The Brazilian couldn’t ignore the connection he made with Middlesbrough, though, returning a year after the World Cup for his third stint with the North Yorkshire outfit. He could never quite rekindle the magic of the first spell, but leaving with the League Cup, the club’s only major honour in their history, was a fitting end for this adopted son of Boro.

Listen to our podcast on Middlesbrough legend Juninho:

Read: The mercurial Colombian who charmed the city of Newcastle

See Also: The Everton cult hero who subbed himself on in a cup semi – and scored