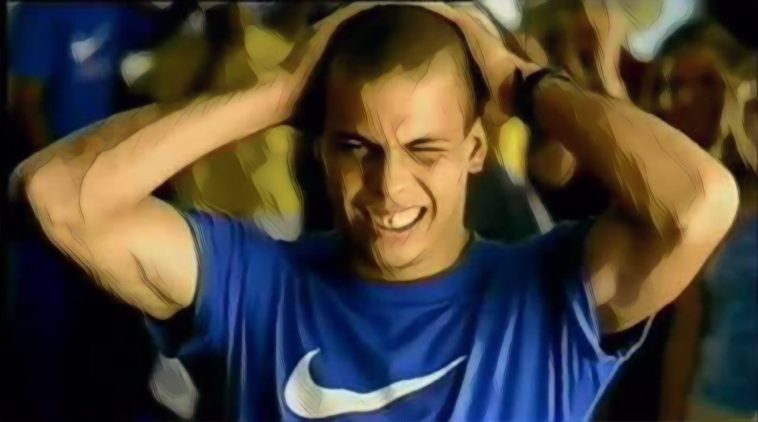 There have been some brilliantly memorable football television adverts featuring some of the game’s most iconic names over the years.

A forgotten classic, this Adidas advertisement features a young David Beckham at school, telling his teacher that he wants to become a footballer. Predictably, the teacher tells him why it’s a naff idea.

Between ‘Step On’ playing in the background and Beckham’s curtains, looking back at this advert leaves us drenched in nineties nostalgia.

The reason this advert didn’t live long in the memory? It was aired at half-time of England versus Argentina at the 1998 World Cup. Yeah, the one where he gets sent off. Great timing, that.

As you’ll find out in this list, Pepsi really did some great football advertisements over the years. While it didn’t hurt to attach themselves to some of the game’s biggest stars, the scriptwriting for them was also pretty clever.

This one from 1999 focused in on Alex Ferguson’s famous half-time team talks, which had become notorious particularly after the Champions League final earlier that same year.

True to form, I’m sure, Fergie starts handing out cans of the fizzy stuff to his players as he gives them a rousing speech to lift their spirits after going 3-0 down, the opening of said cans acting as a quasi-soundtrack, before the payoff finally comes: Peter Schmeichel, of all people, drops the bloody thing just as the boss urges “concentration, Peter”.

“I’m only joking”, he pleads. But you f*cked it though, Peter, haven’t you?

30 of the most iconic football photos ever taken

Nike had only started getting involved in football in the nineties, but they went all-in in the early noughties, embarking on an ambitious, full-scale marketing drive to dominate the market.

A huge part of that drive was not just endorsing famous players, but by creating imaginative adverts that lived long in the memory. One of the ads that still gets talked about by nostalgia junkies to this day is The Cage, a secret mini-tournament between professional players with three men to a team and first goal wins.

Soundtracked by a remix of Elvis Presley’s Little Less Conversation, which went to number one in the charts on the back of this campaign, it’s a masterpiece that showcased the silver scorpion ball that every kid wanted in their stocking that Christmas.

Ranking the best Premier League footballs Nike have ever made

David Beckham really became the face of Pepsi around the turn of the century, and why the hell not; he was an icon at the time. His face was everywhere, his hairstyles convinced men and boys to follow suit on a whim, and there was even a film with his name in it. He was the first footballer to become a brand in and of himself.

Pepsi’s ads were always fun, light-hearted and memorable, and this one exemplifies that better than the rest. After being sent off in a Champions League match against Juventus, Becks is in the tunnel licking his wounds, while a young, somehow unaccompanied child sips on a can of cola across from him.  Where the f*ck were his parents?

The parched midfielder asks for a sip, before the child asks for his jersey. What a lovely moment, this young fan getting the shirt of one of the game’s greatest player, this is what football is all about!

Only, it isn’t. In a moment of pure shithousery, the child takes the corner of the top and uses it to wipe the can from which the Englishman has just drunk. Turns out he’s a Juve fan. The little shit.

Pepsi: Man United vs Real Madrid in the wild west

Another David Beckham classic, Pepsi’s western advert, very possibly the only time both Adidas and Nike featured in the same scene together, deserves more love than it gets.

Featuring a host of star names from Man United and Real Madrid, Iker Casillas steals a bottle of the fizz from right under his nose, and Becks must defend his honour as a result. They step outside for a duel, pitting the world’s best right peg versus the world’s best goalkeeper. Who wins?

Roberto Carlos calling Becks a “gringo” is just the icing on top.

Brown Ale, Mars bars and video games – The most iconic shirt sponsors ever

Arguably the best of the lot, Nike’s advert ahead of the 1998 World Cup featured the entire Brazil team playing football in an airport. Doesn’t sound all that great on paper, but trust us this scene was so much fun.

Curiously, you might notice that the entire squad involved here all sport shaved heads. That’s because a couple of the players played a prank on the team during the 1997 FIFA Confederations Cup, offering haircuts to everyone but instead set the razor to zero. The rapscallions.

There is so much to love about Nike’s Total 90 campaign, the centerpiece of which was their Brazil versus Portugal television advert. The Total 90’s were the Oregon-based company’s riposte to the ultra popular Predators by Adidas, and they became a sensation.

Like all of these ads that we adore, they had a rake of the biggest names at the time, with Ronaldo and Luis Figo featuring most prominently, while there was also cameos from Eric Cantona and Ruud van Nistelrooy. Curiously, a young Cristiano Ronaldo only gets the briefest of moments on camera.

The music accompanying the footage, the elastico Ronaldinho performs (that everyone tried to replicate at home), and the referee putting in a reducer to stop the madness make this one of the most fun productions in this genre ever.

This one got a whole generation of schoolchildren to instinctively shout “olé!” any time someone got megged with a ball.

The German sportswear manufacturer peaked with this effort, where two young kids pick all-star teams for a game of ball in the local courtyard. There’s a host of massive names involved, from Zinedine Zidane and Arjen Robben to Damien Duff and Kaka, while they also use CGI effects to involve Franz Beckenbauer and Michel Platini.

The ad almost loses all credibility when one of the kids makes Djibril Cisse his first pick, though. I mean, come on.

Read: The dirtiest matches in the history of football

Quiz: Name every single team ever relegated from the Premier League