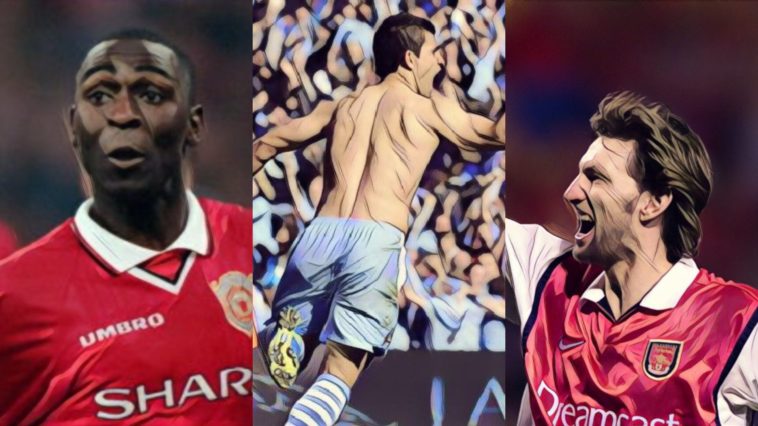 There can hardly be a sweeter feeling in sport than the moment where you know that glory has been sealed.

Sometimes it comes after the final attempt of a penalty shootout has been taken in a cup final or when the referee blows the whistle on the final game of the season.

And sometimes your team scores a goal in a decisive game which confirms, even before the contest is over, that there is no stopping them now. The long march to glory has culminated to this point and you can finally start enjoying it.

We’ve gone back through the years to find such moments in the Premier League’s past, the goals that clinched the title in a given campaign.

The Gunners had the chance to win the title in early May of 1998 and did so in emphatic fashion by beating Everton 4-0 at Highbury. Tony Adams scored the final goal that day, ensuring the trophy would reside in North London.

But it wasn’t just any goal. It was a left-footed doozy of a golazo from a centre-back who rarely traipsed that far up the pitch, hitting the ball with an absurdly clean connection. It was Adams’ third league winner’s medal, but it was probably the sweetest of the lot after that goal.

On this day in 1998, Mr @Arsenal Tony Adams scored this goal against Everton. Was this his best moment for the club?https://t.co/rtmy9MexYw

The most iconic goal celebrations of the Premier League era

The Treble was a close run thing; Manchester United could easily have ended up empty-handed, just as they did the year beforehand. As everyone on the planet knows, they were moments away from being defeated by Bayern Munich in the Champions League final, but the tightness of the Premier League title race has faded into the background

Arsenal’s defeat to Leeds United on the penultimate weekend gave United the opportunity to seal the trophy, they just had to equal their rival’s result on the final day. It was a nerve-shredding afternoon, as Les Ferdinand gave Spurs a shock lead in the first-half.

Andy Cole ( @vancole9 ) scores the goal that effectively confirmed the league for Manchester United in 1999. pic.twitter.com/mC6399SiaO

The ball comes over the top of the striker’s head, so he just calmly controls it like it’s nothing and takes another touch before gently lobbing the goalkeeper. Sublime. The finish ensured that United won the title at their home ground for the first time since the days of Matt Busby.

The best titles races of the Premier League era

Man United fans weren’t always pleased to see the title being won at Old Trafford though, particularly in 2002. Anything other than a win for the hosts against Arsenal in May would ensure the trophy headed back to London for the first time in four years.

The Gunners were just too good, however, as Sylvain Wiltord pounced on a rebound from a Freddie Ljungberg attempt to clinch the title at their bitter rival’s home. Is there anything sweeter?

Despite United’s 87 goals scored being the most of any side in the league that season, they ended up finishing in third place behind the Gunners and Liverpool.

If winning the league at Old Trafford wasn’t good enough for Arsenal fans, then winning it at White Hart Lane certainly was. The Gunners just needed any positive result in order to clinch the title and they got off to the perfect start after Patrick Vieira opened the scoring just two minutes into proceedings.

Just over half an hour later Robert Pires doubled the lead with a neat finish past Spurs goalkeeper Kasey Keller, which got the celebrations truly rocking.

Tottenham ended up securing a point from the match following goals from Jamie Redknapp and a last minute penalty from Robbie Keane, but it was enough to mathematically seal top spot and kept them on track to go the season unbeaten.

How a World Cup winner ended up becoming a Middlesbrough legend

Chelsea’s first league title in 50 years was a special moment for the South West London outfit, so it was fitting that club legend Frank Lampard was the one to rubber stamp it at the end of a phenomenal 2004/05 campaign.

The midfielder, who scored a brace that day, struck a roaring shot to beat Bolton Wanderers goalkeeper Jussi Jaaskelainen, before rounding the Icelander for the second.

Chelsea retained their title against nearest challengers Man United with three games to go at Stamford Bridge, but in all reality, their coronation was a formality. The Red Devils would need to win all of their remaining games, the Blues to lose all of theirs and somehow overcome a 12-goal differential.

As such Chelsea made it official on 29 April by thumping the visitors 3-0 with goals coming from William Gallas, Joe Cole and Ricardo Carvalho. The Portuguese centre-back’s goal, the final of the lot, was a barnstormer; he retrieved the ball in his box to start the move, ran the length of the field as Frank Lampard and Cole progressed the ball, before smashing the ball into the net. A wonderful goal.

A special mention to Cole, who scored a brilliant goal to make it 2-0 by holding off two United defenders before driving into the box to shoot past Edwin van der Sar.

Eight years on, what is left to say that hasn’t already been said? With time running out on the 2011/12 season, Manchester City needed to find a goal from somewhere – and their star striker came up with the goods.

City had seconds, not minutes to steal the title away from Man United, but it was looking increasingly bleak. Then Edin Dzeko scored an equaliser in injury-time against Queen’s Park Rangers and hope was suddenly revitalised.

QPR were still playing under the assumption that they needed a positive result to avoid relegation (this was no longer the case thanks to results elsewhere) and were stubbornly keeping their star-studded opponents at bay. That was until Mario Balotelli slipped the ball into a cranny for Sergio Aguero, who blasted the ball past Paddy Kenny to win the title in the most sensational way possible.

Once again Martin Tyler provided the inimitable soundtrack to a classic moment in Premier League history.

Desperate to regain the title before retiring into the sunset, Alex Ferguson bought Robin van Persie from Arsenal ahead of the 2012/13 season. After losing the title on goal difference to their ‘noisy neighbours’ the year before, Man United would win it by an 11-point margin.

It was only fitting that the Dutch striker clinched the league with a hat-trick against Aston Villa in April, the most memorable of which was this perfect volley, one of the best goals of the decade:

In his most recent Sunday Times column, Wayne Rooney called it “one of my favourite moments” in his playing career:

“I found him from inside our half and he beat Brad Guzan with a beautiful volley and the best thing was that Robin and I had actually worked on that move before the game because we knew Villa’s centre backs liked to push up.”

Read: Newcastle get rid of Ashley, but at what cost?