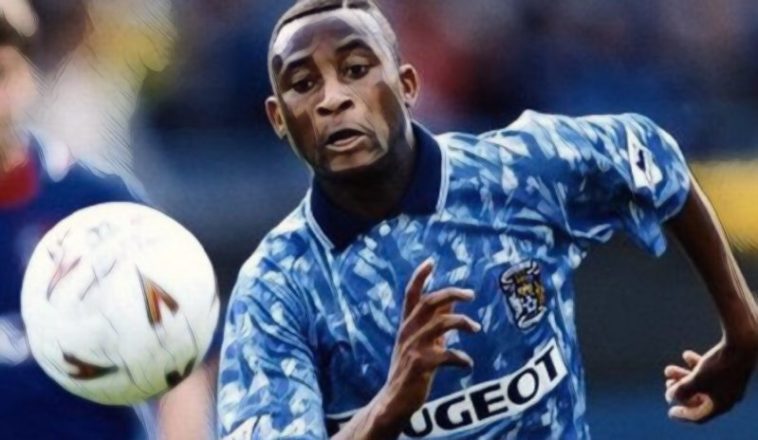 In the early 1990’s, the Zimbabwean national team had a squad dubbed the “Dream Team” who fans and pundits believed would earn the country a place at their first ever World Cup.

This team was spearheaded by two brothers, Adam and Peter Ndlovu. The latter of which is recognised as the first African to have played in the Premier League.

For fans old enough to remember the early 90’s, you will probably recall having trouble knowing how to pronounce the name “Ndlovu”. It was definitely a problem for commentators in the English league, as heard in most commentary from the time, and they would have to say it a lot when the then 18-year-old burst onto the scene in 1991.

Ndlovu, pronounced “end-lo-vu” for those of you who are interested, wasn’t the first African footballer to have played in England. In fact, he wasn’t even the first Zimbabwean.

The first recognised black African professional footballer was Ghanaian goalkeeper Arthur Wharton, who played for several teams including Preston North End and Rotherham United between 1885 and 1902. As for first Zimbabwean, the eccentric Bruce Grobbelaar was the first to have played in the English league when he signed for Liverpool in 1981.

In 1990, former Coventry City manager John Sillett spotted an exciting teenager playing up front for the Highlanders in Zimbabwe. In July 1991, Sillett’s replacement Terry Butcher went on his predecessors recommendation and signed that teenager for the club.

Ndlovu would make his English league debut against Queens Park Rangers in August 1991 and scored his first goal for the club in an away win at then champions Arsenal in just his fifth appearance. He followed that up a few weeks later with a fantastic finish in a 1-0 win over Aston Villa.

The 1991/92 season may have been Ndlovu’s first season in English football but it would also be the last for the old English league system. 1992 would see the introduction of the new English Premier League, with bells and whistles and an influx of money.

It was a new era for football in England and the Bulawayo-born Ndlovu, who had grown up in the Binga district of Zimbabwe, would forever have his name etched into the record books.

Grobbelaar had lost his place as Liverpool number one, following the signing of David James and the formers decision to choose representing his country over playing for his club left the door open for Ndlovu to become the first African to play in the newly formed Premier League.

This monumental moment happened at White Hart Lane on 19th August 1992, when Ndlovu came on to replace John Williams in the 70th minute of Coventry’s away victory at Tottenham Hotspur.

His first three appearances of the 1992/93 season would come from the bench, as a replacement for Williams, and he would have to wait until September for his first start. That came against Sheffield Wednesday on matchday six and Ndlovu marked the occasion by netting his first Premier League goal.

The skilfull and pacey Ndlovu, blessed with the deftest of touches, helped Coventry to become one of the most exciting attacking teams in the top flight during that season. Though the Zimbabwean only found the net seven times, his speed and skill on the ball caused opposition defences no end of trouble and he provided the perfect foil for strike partner Micky Quinn.

The latter scored 17 goals that season, to make it 24 between them, but a poor run towards the end of the season saw the club drop from fifth in February down to a 15th placed finish.

Ndlovu enjoyed a better season in front of goal during the 1993/94 season, netting 11 goals and turning the heads of managers at the top clubs in the country. During this campaign, Arsenal had a £4 million bid rejected for him, which would have made him the most expensive player in the English football at the time.

However, the transfer didn’t happen and many fans have been left to wonder what the future would have held if he had have made the move.

Moving on from Coventry

The man known as “Nuddy” to Coventry fans remained at the club until 1997 and enjoyed some memorable moments that will live with football fans for years to come.

One of those moments came during the 1994/95 season when Ndlovu became the first away player to score a hat-trick against Liverpool at Anfield in thirty years.

In July 1997, seven years after his arrival, Ndlovu bid farewell to Highfield Road and signed for Birmingham City for a fee of £1.6m. This move came after Coventry had retained their place in the Premier League by a single point the previous season.

He helped Birmingham reach two play-off finals, without success, and played a part in them reaching the League Cup Final in 2000/01. However, Ndlovu didn’t get his day out at Wembley as he was released to join Sheffield United shortly after the semi-final.

As part of Neil Warnock’s Sheffield United side, Ndlovu netted 25 goals in 135 league appearances and helped the side get to the semi-finals of both the FA Cup and the League Cup. They also came agonisingly close to promotion back to the Premier League as well.

After leaving Sheffield United in 2004, Nuddy moved to South Africa with the Mamelodi Sundowns. He remained there for four years and then finished his career in 2011 after a spell with the Black Mambas in his native Zimbabwe.

As mentioned earlier, Ndlovu was part of what was believed to be a golden age for the Zimbabwe national team alongside his brother. Although he never did help them qualify for a World Cup or even an African Cup of Nations, Peter Ndlovu is considered a legend in Zimbabwean football.

The “Dream team” got to within eleven minutes of qualifying for the AFCON and were one game away from USA ‘94, but neither were meant to be.

Despite those failures, Ndlovu made 100 appearances for his country and scored thirty-eight goals in an international career that spanned 16 years from 1991 to 2007. He still holds the record for most Zimbabwe caps and is their all-time leading goalscorer.

Ndlovu was held in that high an esteem that he was appointed assistant manager of the national team for two years from 2011.

Off Pitch Tragedy and Scandal

Ndlovu may have enjoyed a long and exciting career on the pitch but his life wasn’t without scandal away from it.

There have been many scandals involving women for Ndlovu, with allegations of a fight between him and former teammate Benjani Mwaruwari involving a girlfriend as well as a case where the striker refused to pay maintenance for his children after divorce from his ex-wife. He claimed the children weren’t his but DNA tests proved otherwise.

But, the biggest scandal of Ndlovu’s life was also a great tragedy for him.

In December 2012, the car Ndlovu was driving crashed into a tree near Victoria Falls Airport in Zimbabwe, with both a female passenger and his brother Adam being killed in the accident. Ndlovu himself suffered several injuries and was in a critical condition.

After recovering he was charged with culpable homicide and was to stand trial accused of not controlling his vehicle and being responsible for two deaths. He was eventually found not guilty of this due to a lack of evidence.

Regardless of any off-pitch scandal or indeed his lack of medals or trophies from his career, Peter Ndlovu was a fantastic football player. His skill, grace, touch, and pace were top notch and some believe it is a shame he never moved to a bigger club where he could have been even more successful.

And, no matter what, he will always be the first African to have ever played in the Premier League.

Read – Faustino Asprilla: The mercurial Colombian who could win a game on his own – if he felt like it