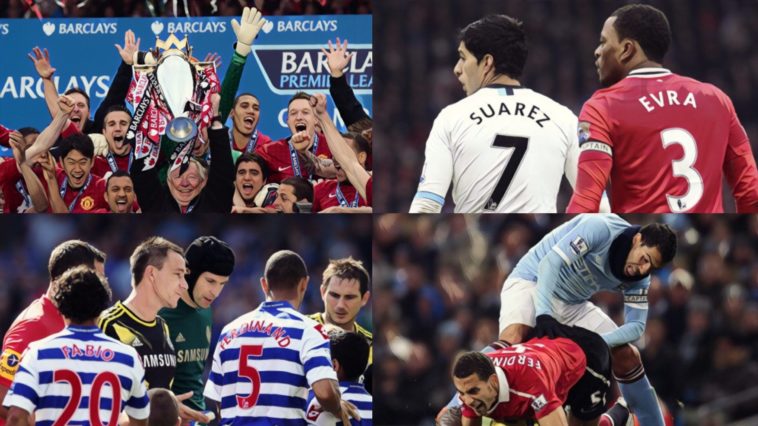 In the final edition of our three-part series on the most iconic imagery in Premier League history, we take a look back on the decade just gone.

Football photography has managed to capture some of the most memorable and iconic moments in the sport’s history in ways that have imprinted on our minds for the rest of our lives.

As they say, a picture is worth a thousand words, so we’ve picked out some of the greatest Premier League images of the past decade, in chronological order, for your perusal. Part one covered the nineties, while part two looked at the noughties.

50 of the most iconic Premier League photos from the 2010’s:

You can’t see me

Clint Dempsey giving it the John Cena treatment after scoring for Fulham against West Ham United at Craven Cottage on 2 May 2010. The American’s hand was bandaged up after he punched a window when he was told by Roy Hodgson that he wouldn’t be starting the UEFA Europa League semi-final second leg against Hamburg.

Remembering Fulham’s incredible comeback win over Juventus a decade on

Without question, the greatest photo ever taken in the history of sport, never mind the Premier League. Taken during the Manchester Derby in November 2010.

Conditions in North London worsen as the match between Arsenal and Stoke City is postponed in December 2010.

Five of the best Premier League goals of the past decade

Fernando Torres shakes hands with former teammate Steven Gerrard prior to Chelsea versus Liverpool at Stamford Bridge in February 2011. The Spaniard had just left the Merseyside outfit for London the previous month after a high profile transfer saga.

Fulham chairman Mohamed Al Fayed unveils a statue in tribute to Michael Jackson at Craven Cottage in April 2011. Because why the hell not.

Charlie Adam goes for a tumble as Blackpool celebrate scoring against Man United at Old Trafford in May 2011. The Tangerines were relegated from the Premier League that same day.

A man handcuffs himself to the goal posts during the match between Everton and Manchester City at Goodison Park on January 2012.

Liverpool striker Luis Suarez refuses to shake the hand of Patrice Evra ahead of the match against Man United at Old Trafford on 11 February 2012. The Uruguayan was found to have racially abused the full-back in a previous encounter between the two sides.

Wigan goalie Ali Al Habsi attempts to save a shot against Norwich City at Carrow Road in March 2012.

Blackburn Rovers striker Yakubu and Wigan’s Al Habsi remove a chicken from the goal at Ewood Park in May 2012.

Sergio Aguero wheels away in celebration after scoring the most dramatic league-clinching goal in Premier League history against QPR on 13 May 2012.

Eight of the greatest title-clinching goals in Premier League history

Meanwhile, in Sunderland, Man United leave the field after finding out that Man City have beaten QPR and won the title.

QPR’s Anton Ferdinand walks past Chelsea centre-back John Terry prior to kickoff at Loftus Road on 15 September 2012. Terry was banned for four matches by the FA 12 days later for racially abusing Ferdinand in a previous encounter.

A blood-soaked Rio Ferdinand celebrates at the end of the Manchester Derby at the Etihad Stadium in December 2012.

The moment right after Luis Suarez bites Branislav Ivanovic at Anfield on 21 April 2013.

Glamourous Ginola was not a great goal scorer, but a scorer of great goals

Sunderland manager Paolo Di Canio celebrates victory over Everton at the Stadium of Light in April 2013.

Alex Ferguson is given a round of applause as he walks out onto the Old Trafford pitch for the final time as Man United manager.

Bowing out in style

Alex Ferguson lifts the Premier League trophy following his final ever home match against Swansea City on 12 May 2013.

Daniel Sturridge celebrates his hat-trick with Jamie Carragher during the match between Fulham and Liverpool at Craven Cottage in May 2013.

A kiss for luck

A dejected Steven Gerrard looks on as the Chelsea fans celebrate their second goal at Anfield on 27 April 2014.

In that same match Jose Mourinho attempts to waste time as Jon Flanagan and Gerrard try to retrieve the ball.

The seven moments that defined the Liverpool-Chelsea rivalry

A dejected Luis Suarez reacts following Liverpool’s 3-3 draw with Crystal Palace at Selhurst Park on 5 May 2014.

The five decade-defining football matches of the 2010’s

Mourinho and Arsenal manager Arsene Wenger are kept apart by the fourth official Jonathan Moss during the match between Chelsea and Arsenal at Stamford Bridge in October 2014.

Wayne Rooney celebrates scoring Man United’s third goal against Tottenham Hotspur by referencing a viral video that showed him being knocked out by Phil Bardsley on 15 March 2015.

The most iconic goal celebrations in Premier League history

Juan Mata scores his second goal in a 2-0 victory over Liverpool at Anfield on 22 March 2015.

A crown fit for a king

Didier Drogba celebrates winning the Premier League title with his Chelsea teammates at Stamford Bridge on 24 May 2015.

Sergio Aguero kisses the ball to celebrate his hat-trick against Newcastle United at the Etihad Stadium in October 2015.

Too close for comfort

A Liverpool fan kisses Divock Origi as he celebrates after scoring his team’s fourth goal against Aston Villa in February 2016.

A West Ham fans sings as he looks on from his vantage point during the match between the Hammers and Man United, the last ever game at Upton Park, on 10 May 2016.

A young Swansea City supporter takes a peek in a gap in the wall prior to the match between Swansea City and Bournemouth at the Liberty Stadium on 31 December 2016.

Referee Mike Dean pulls a face as he walks through the bubbles during the Premier League match between West Ham United and Manchester United at London Stadium in January 2017.

Tottenham Hotspur fans celebrate after their team beat Man United in the final ever match at White Hart Lane on 14 May 2017 after their 118 year stay at the stadium.

Son Heung-Min runs at the Newcastle United defence during the between the Magpies and Spurs at St. James Park in August 2017.

This kid knows the score as he holds up his banner during the match between Southampton and Liverpool at St Mary’s Stadium in February 2018.

Arsene Wenger heads the ball back into play during the match against Burnley at the Emirates Stadium on 6 May 2018. It is his final game as Arsenal manager after 22 years in charge.

Mo Salah runs with the ball against West Ham at Anfield in August 2018.

One in the eye

Definitely one of the more gruesome photos anyway, as Jan Vertonghen accidentally pokes Roberto Firmino in the eye in September 2018.

Pep Guardiola and Jose Mourinho greet each other ahead of the Manchester Derby in November 2018.

Josep Guardiola, Manager of Manchester City reacts by ripping his scarf off during the match between Man City and Liverpool at the Etihad Stadium on 3 January 2019.

Liverpool manager Jurgen Klopp looks as if he’s about to drop the hottest rap album of 2019 as he watches his side take on Fulham at Craven Cottage in March.

Mo Salah celebrates with his Liverpool teammates after scoring their second goal against Chelsea at Anfield in April 2019.

Vincent Kompany holds up the Premier League trophy after Man City’s 4-1 victory over Brighton and Hove Albion secured the title on 12 May 2019.

Kevin De Bruyne leaves for his home planet after scoring against Arsenal at the Emirates Stadium on 15 December 2019.

Read: Why Kevin De Bruyne should be crowned Player of the Year for 2019/20

See Also: 30 of the most iconic photos in football history