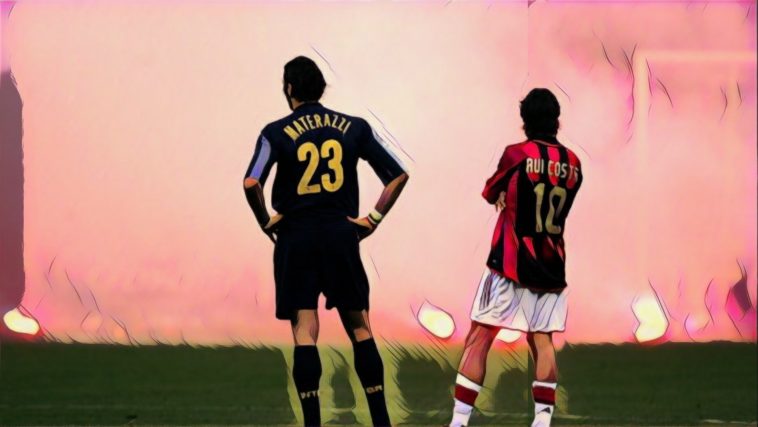 Football photography has managed to capture some of the most memorable and iconic moments in the sport’s history in a ways that have ensured they remain imprinted on our minds forevermore.

As they say, a picture is worth a thousand words, so we’ve picked out some of the greatest, in chronological order, for your perusal.

30 of the most iconic football photos ever taken:

Part of the huge crowd spilling onto the pitch as policemen struggle to gain control at the 1923 FA Cup final between Bolton Wanderers and West Ham United. The Trotters won 2-0.

A kiss before kick-off.

The captains of the French and English Ladies football teams, Carmen Pomies (left) and Florrie Redford, having a handshake and a peck on the cheek before the start of the England versus France women’s international football match in aid of shipwrecked mariners in May 1925.

Peter Ndlovu: The first ever African footballer in the Premier League

Kick-off in the snow.

The referee tosses up on a snow-covered football pitch at the start of the football match between Arsenal and Manchester United at Highbury on 16 January 1926.

Leicester City goalkeeper Gordon Banks puts his reflexes to the test by saving a dog during a match against Manchester United at Filbert Street on 13 November 1965.

What has this photo of a dog and his owner got to do with football? Well, this is Pickles, the dog who found the stolen World Cup when out for a walk with owner David Corbett in Norwood, south London. Taken on 28 March 1966. Good boy.

Pele is lifted up by his Santos team mates after scoring (supposedly) the 1,000th goal of his career during a game against Vasco da Gama at the Maracana Stadium in Rio de Janeiro on 19 November 1969.

Pele is chaired off the Azteca Stadium pitch wearing a sombrero after Brazil had won the World Cup trophy for the third time on 21 June 1970.

Argentina’s Diego Maradona up against six Belgian players during the 1982 World Cup. Of course, the image is a bit misleading, as this happened just after a set piece has been taken rather than the moment El Diego is about to take on half a dozen opponents.

There is no more iconic photo in the history of football than this. On 22 June 1986, Maradona leaps above England goalie Peter Shilton to knock the ball in with his hand during the quarter-final of the World Cup in Mexico.

Henry, Maradona and the most infamous handballs in football

A contrast in emotions.

Brazil goalkeeper Taffarel celebrates after Italy striker Roberto Baggio misses his penalty to decide the FIFA World Cup Final at the Rose Bowl on July 17 1994. Despite being arguably the most talented Italian of his generation, the miss would become the defining image of his career.

“It’s a wonderful run from Giggs!”

Man United’s Ryan Giggs wheels away in celebration after scoring a dramatic winner to defeat Arsenal 2-1 in extra time during the 1999 FA Cup semi-final Replay on 14 April 1999 at Villa Park.

“And Solskjaer has won it!”

Ole Gunnar Solskjaer celebrates after scoring the winning goal in the UEFA Champions League final for Manchester United against Bayern Munich at the Camp Nou in 1999.

I think this young Feyenoord fan, pictured at the UEFA Cup final between Feyenoord and Borussia Dortmund played at the De Kuip Stadium in 2002, has made his feelings pretty clear.

From one great to another, Pele greets Ronaldo after Brazil win the FIFA World Cup in 2002.

Spanish midfielder Xabi Alonso scores the equaliser during the UEFA Champions League final between Liverpool and AC Milan on 25 May 2005. What an image.

10 of the best football series and films to stream online

Rush of blood to the head.

In his last ever game as a professional footballer, Zinedine Zidane walks by the World Cup trophy after headbutting Italy’s Marco Materazzi in extra-time of the final on 9 July 2006. Italy went on to win the penalty shootout 5-4.

Andres iniesta whips off his top after scoring the winning goal in the FIFA World Cup final in Johannesburg on 11 July 2010, revealing a tribute to Dani Jarque, a Spanish footballer for Espanyol who died of a heart attack at the age of 26 in 2009. The tribute read: “Dani Jarque, always with us”.

David Beckham is tossed in the air by his team mates after the Ligue 1 match between Paris Saint-Germain and Stade Brestois 29 at Parc des Princes on May 18 2013, his last game in professional football.

This photo sums up the feelings of a nation after the drubbing Brazil received in the 2014 World Cup semi-final.

Seven of the best football books you should read

The real hero of the 2014 World Cup, Mexico manager Miguel Herrera celebrates a goal against Croatia with goalkeeper Guillermo Ochoa in typically bonkers fashion on 23 June 2014.

Right in the kisser.

This photo, taken during the UEFA Europa League final between Liverpool and Sevilla in 2016, is not quite a Renaissance painting, but it’s bloody well close. The timing of the photographer, Lars Baron, is perfect, capturing this Reds fan getting punched right as the fist meets his face, while the reaction of the man behind him is priceless.

Five of the dirtiest matches in the history of football

Lionel Messi jumps into the crowd after Barcelona complete the biggest comeback in Champions League history against PSG on 8 March 2017.

Boca Juniors coach Barros Schelotto leaves the pitch after his side lose the derby against Buenos Aires rivals River Plate as part of Torneo Primera Division 2016/17 at Alberto J. Armando Stadium on 14 May 2017.

Five of the best indy football podcasts you should listen to

Andres Iniesta sits alone on the Camp Nou pitch at the end of a La Liga ties between Barcelona and Real Sociedad on 20 May 2018. It was his last ever game for the club.

Lionel Messi celebrates after scoring his side’s first goal against PSV Eindhoven in the UEFA Champions League Group B on 28 November 2018. Spectacular shot from the photographer.

Five of the best football documentaries available for free on YouTube

Carlos Tevez of Boca Juniors celebrates after scoring the opener for Boca Juniors against Gimnasia as part of the Superliga 2019/20 season at the Estadio Alberto J. Armando on 7 March 2020. Boca won the league title in this game and Tevez went predictably bananas during and after it.