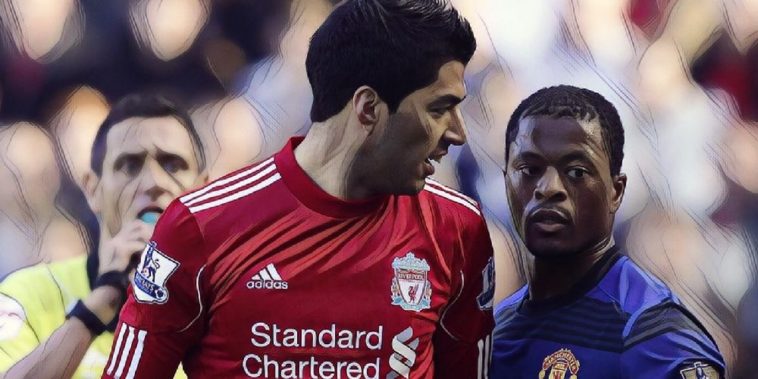 The former Manchester United defender was racially abused by then Liverpool star Suarez during a fixture between the two arch-rivals nine years ago, with the latter found guilty of misconduct by the Football Association and suspended for eight matches.

Evra has now opened up on the sickening abuse he received following the incident, revealing how he was forced to employ security for the Frenchman after his family received death threats from imprisoned Liverpool fans.

“I think people didn’t know what had happened behind the scenes,” Evra told the UTD Podcast.

“The referee [Andre Marriner] came over and asked what was happening with us two. He’d seen my eyes change and he asked if I was okay. I told him he racially abused me and he said: ‘Okay, we’ll talk after the game. Keep playing and don’t do anything silly’.

”After it was in the papers, and Manchester United received so many threatening letters about me. People said: ‘We’re in jail, we’re Liverpool fans. When we get out, we’re going to kill you and your family’. For two months, I had security everywhere I went. They were sleeping in front of my house. Everywhere I went, the security followed me. It was a tough time, but I wasn’t scared. My family were scared: my wife and brother, but I wasn’t. I couldn’t understand why people hated me so much. They didn’t know the truth.”

Evra also opened up on the hearing and subsequent response from Liverpool following the guilty verdict, the club incomprehensibly defending the Uruguayan and wearing T-shirts in support of the forward ahead of a clash with Wigan.

Jamie Carragher – who was a part of the Liverpool side at the time – last year publicly apologised to Evra and described the show of support as a ‘big mistake’, whilst the Merseyside club’s chairman Tom Werner also issued an apology on behalf of the club.

The response of Liverpool was a dark moment in football’s fight against racism and Evra admits to feeling ‘confused and upset’ by the show of support for Suarez, though insists he has now forgiven all parties – including the now Barcelona forward.

”When we went to the hearing with Luis Suarez and he started lying and saying when he says ‘negro’, he means ‘friend’,” recalled Evra.

“I said: ‘That is not my name. My mum gave me a name, not a colour’. I know that, in South America, when some fans see a black player they will call him ‘negro’ and sometimes it’s nice, sometimes not nice. Anyway, my name is not ‘black’, it’s Patrice.

“So we argued, but Sky have some good footage where you can see him actually say it. In the end, he admitted it and he was banned for eight games, and he had a massive fine. I remember after that, Liverpool played a game and they all wore the T-shirts saying ‘support Suarez’. He had been banned for racist abuse, had been fined and they support him that way. I was confused and upset.

“But, when I did the punditry on Sky and Jamie Carragher apologised after eight years, I was so surprised. He said they made a big mistake that day and he apologised. It really touched me and now I will respect Liverpool as a football club because, when this happened, I was really disappointed with the club. I received an email from the chairman of Liverpool apologising for what happened nine years ago. He said I was welcome to come to Liverpool if I need anything.

“It really touched me because it’s better late than never. But I was surprised that Liverpool supported that kind of attitude. When you have those kind of problems, people around you just think you are crying. Even when I said: ‘You will see the report’, people thought I was still talking about it. I wasn’t still talking about it – I even named Suarez Player of the Year that year. I could evaluate Suarez on the pitch and know the person he was. It was a tough, tough, tough time.”

Read: Evra recalls Ferguson’s infamous ‘hairdryer’ and being taught to be ‘like a robot’