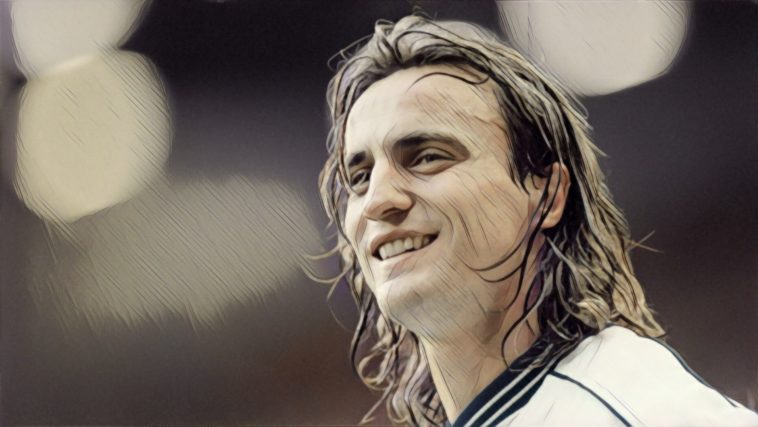 When one thinks of David Ginola, a few things come to mind: flair, ingenuity, good looks. And goals.

And when a footballer is defined by goals, it is usually because they have scored an abundance of them. And yet Ginola only just about got over a century of them in 613 appearances during his club career. One in every six games is hardly the record of a natural goal scorer.

But the Gallic wing wizard was known for scoring because of how he put them in the net, not how many. In the nineties if you were checking the latest scores on Ceefax and his name flashed up on the television screen, there was a fair chance that Ginola had just scored a golazo.

As if playing a video game in which a power gauge had to be filled up in order to use a finishing move, Ginola reserved his shots for maximum effect. A high proportion of his goals, therefore, were absolute bangers.

That wasn’t the only reason football fans fell in love with Ginola, though. There was something about him that endeared everyone to him. Football writer Stephen Tudor captured that feeling perfectly when speaking on the latest episode of the 90’s Football Hall of Fame podcast:

“The way he ran with the ball. It was all swishy and swoon-y, and it made him arguably the most aesthetically pleasing player in possession of a football in living memory in my opinion. It was all fluid and flowing and mazey runs to die for, his artisan hair whooshing in the wind.

“Yeah okay, so he didn’t have much pace, you couldn’t really count on him to track back, but put the ball at his feet and he just made beautiful things happen at a time when we only started to realise that football could be beautiful.”

A lack of consistency could lead one to making the argument that Ginola favoured style over substance, that he was all sizzle and no steak. But let’s get real; only miserable bastards think that way.

Ginola made a name for himself in his native France, where he was a dominant force in a terrific PSG side. During his four years at the club, they won the Ligue 1 title, the Coup de la Ligue, and the Coup de France twice, and reached the semi-finals of the UEFA Champions League. It was in the French capital that his reputation for wondrous goals burgeoned.

His performances in Europe during that spell put Ginola on the map, none more so than the 4-1 win over Real Madrid in the UEFA Cup in 1993. The brilliant George Weah flicks the ball up deftly for the PSG striker, who nods it down for Ginola to smack home on the half volley from the edge of the box. Cue pandemonium.

‘Le Magnifique’ left Paris before they finally achieved success in Europe however, joining Newcastle United for £2.5m the summer before his former side won the UEFA Cup Winners’ Cup.

Ginola moved after enduring an entire year and a half of being scapegoated for France’s failure to qualify for the 1994 World Cup. The winger sent in an errant cross in the dying stages of their qualifier with Bulgaria at the Parc des Princes, only for the visitors to go up the other end of the pitch and score the winner just as the clock ticked 90.

National team manager Gerard Houllier immediately jumped upon the mistake in the aftermath of the defeat, dramatically claiming that Ginola had “sent an Exocet missile through the heart of French football and committed a crime against the team.”

Yes, Ginola should simply have run the clock down rather than give it away so needlessly, but he was an undeserving patsy for a national failure. A month previously France had, after all, been defeated 3-2 at home by the winless Israel – featuring a rocket of a goal from Ginola, of course – the bottom team in Group 6.

And even after losing the ball to the Bulgarians, there was ample opportunity for the French defenders to stop the move before Emil Kostadinov put the ball in the net. Ginola didn’t appear for France beyond 1995, finishing his career with a criminally low 17 international caps and zero appearances at major tournaments. Meanwhile, Djibril Cissé won 41 and played at two World Cups.

All of this preceded his shock transfer to the North East of England, quite the change of culture for a man born on the Cote d’Azur. He had been heavily linked with Barcelona, who were knocked out by PSG in the Champions League quarter-finals that year. Ginola’s performances against Spanish opposition in European competition saw Spain’s media dubbed him La Magnifico.

But in Kevin Keegan he found a man who understood him, who ‘got’ the essence of Ginola, which is what ultimately persuaded him to join the Premier League. The Frenchman would not compute with the modern game as it is.

“I like the fact that football is made for entertainment… (but) I can see that football is very concerned with tactical battles rather than giving the opportunity and the freedom for creative players to express themselves,” he told Sky Sports.

“It is about instinct and football should be that. Creativity. Instinct. You don’t dictate things in football. This is a gift. When you receive the ball, the ball is your friend.”

Keegan shared those ideals, giving his players the freedom to do their thing. And Ginola, desperate for a fresh start, did exactly that. In just his second game for the Magpies he turned a Sheffield Wednesday defender inside out before lashing a wicked shot into the far corner.

It was a portent of things to come, although Ginola was hardly prolific during his time in England. He scored five that season and never hit double digits in a single campaign. That was somewhat surprising given, in his previous two seasons at PSG, he had scored 30 goals in all competitions.

Ginola often played as a shadow striker in that side, however, whereas in the Premier League he was exclusively a winger. The nineties were a truly golden age of wing play in the English top-flight, but Ginola offered a unique twist on the position that has only become popularised in the last decade.

Naturally right-footed but adept with either boot, Ginola played on the left-hand side as an inverted winger. Every time he got the ball he had two options: either bomb down the touchline and cross it in or cut inside and have a go. Whichever path he took it caused havoc with defenders, something Gary Neville was the unfortunate victim of in the 1996/97 season when Newcastle famously thrashed Manchester United 5-0.

Ginola only scored two goals in the entirety of that campaign, with the second coming just three days after netting against Man United. The volley against Ferencvaros in the UEFA Cup might just be the best of his career, though.

Keegan left the club just two months later and Ginola followed him out the door not long after. He made his way to North London and signed for Tottenham Hotspur, where he played under five managers.

One of them was perhaps the worst kind of manager he could have possibly encountered: George Graham. The ultimate pragmatist, the former Arsenal manager was never afraid to put a player in his place. In 1994 he called Alan Smith, one of his most reliable lieutenants, a “c*nt”.

“And you, you c*nt, you’re always on the treatment table and never fit. Then you put in a performance like that!”

Even during an era where it was completely normal for managers and coaches to tear their players a new one, Smith was shocked by the language used by Graham on that occasion. “For him to call me out in that way, it just shocked me so much. It cut me to the quick,” he wrote in his autobiography.

This was the man set to work with the most modern of modern players at the time. Unsurprisingly there were teething problems. “In training, as soon as he started, head down, beating legs, I’d stop everything and say, ‘David, oh, no, no, no’,” Graham said in 1999.

“Simplicity is genius. I said to him, ‘David, I want an end product to your play. You’ve got too much talent to be an entertainer. If I want to watch tricks, I’ll go to a circus’. Some of his crossing this season has been magnificent. But he’s got to score more goals.”

Just a few days later Ginola scored a thunderbolt against Leeds United in the FA Cup, almost as if to say “up yours, George”.

The two men were like chalk and cheese, and yet Ginola played some of the best football of his life under the Scot. Spurs won the League Cup that season, denying Man United a quadruple in the process, while the Frenchman won both the PFA and FWA Player of the Year awards.

The relationship wouldn’t last much longer regardless, but Ginola did at least leave the club with a bundle of fond memories, not least his exceptional goal against Barnsley. Moving through the defence like an eel, it really is one of the all-time great FA Cup goals.

From there Ginola didn’t have too many more miles on the clock, but he did have at least one more “up yours” in him. He moved to Aston Villa where he played under John Gregory, who euphemistically said the player was “carrying a bit of timber.”

Ginola subsequently took to the field against Manchester City with a point to prove, leathering the ball on the volley with such venom that he probably imagined it was Gregory’s face he was kicking into the net.

It’s sad to think that such a phenomenal player came so close yet never won the Premier League title or that he missed out on winning the World Cup. But there’s one word that keeps coming up again and again when it comes to David Ginola: magic. And no amount of trophies are worth that.

Read: A look back at Jurgen Klinsmann’s short but sweet Spurs spell

See Also: Remembering every PFA Player of the Year from the 90’s