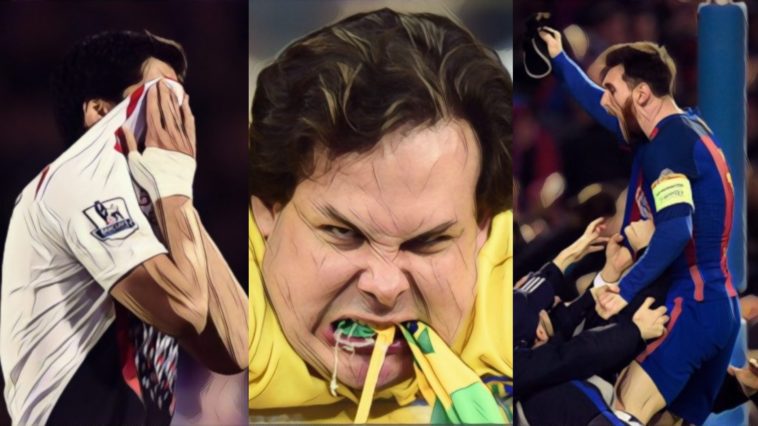 There have been dozens of magnificent, out-of-this-world football matches played in the last decade, which made it extremely difficult to whittle them down into one list, but these five are the most memorable of the 2010’s.

About as dramatic as it gets when it comes to European football and one of, if not the, most memorable Europa League ties of all-time. Jurgen Klopp returned to face his former club – having joined Liverpool earlier on in the season to take over from Brendan Rodgers – where he had brought great success to Borussia Dortmund.

Neither side could be separated in the first leg, as it ended 1-1 at the Westfalenstadion. The return fixture at Anfield was a different matter, however, as the Germans raced into a two-goal lead within the first nine minutes. The Reds would need to score three times to progress to the semi-finals.

Divock Origi pulled one back just after half time, but a Marco Reus goal just before the hour mark seemingly killed off the tie as a contest; the hosts would need to score three times in the space of 30 minutes to go through.

In scenes reminiscent of that night in Istanbul 11 years previous, Liverpool, buoyed by a raucous Anfield atmosphere, clawed their way back into the game with scores from Philippe Coutinho and Mamadou Sakho. The away goals rule meant that Dortmund would still progress regardless — that was, until Dejan Lovren of all people popped up to score an injury-time winner.

That dramatic climax also gave us this incredible piece of commentary/white noise from John Aldridge:

Perhaps the single most iconic moment in a Premier League match from the past decade, if not since the league’s inception, Sergio Aguero’s last-second winner to clinch Manchester City‘s first top-flight title in 44 years will forever be etched into the minds of football fans who witnessed the incredible final day of the 2011/12 season.

But it’s the context to this fixture, and not just the final moment, that really makes it one of the great matches of the decade. Having clawed back Manchester United‘s eight-point lead at the top of the table, which the Red Devils held with six games to go, they just needed to beat relegation-threatened Queen’s Park Rangers or at least equal their rival’s result against Sunderland. An easy equation, but the Sky Blues didn’t make it so for themselves.

Pablo Zabaleta put the home side a goal up in the first half to set them on their way, but Djibril Cisse scored an unlikely equaliser shortly after the half. Chaos engulfed the match not long after, as Joey Barton was red-carded for lashing out at Carlos Tevez. He went on to knee Aguero in the back of the leg, before nearly getting in another row with Mario Balotelli on the way off the pitch.

That should, in theory, have made their task all the easier, but the 10-man Rangers were fighting for their very survival in the top flight, meaning they were in no mood to bow down and let City walk their way to a simple victory. With the home side laying siege to their goal, QPR countered to take the lead through a Jamie Mackie header in the 66th minute. This game was swinging like a pendulum and it firmly went the way of the visitors in the second half.

As the match ticked over into injury time, the crowd had virtually lost all hope of winning the game despite City’s repeated efforts to break down the opposition defence – they took an astronomical 44 shots to QPR’s three, while having 81.3% possession. And then, out of nothing, Edin Dzeko popped up to head home an equaliser in the 92nd minute.

Even then, it didn’t seem possible to get that elusive goal with time running out. QPR were doing well to frustrate the title challengers. One embittered fan was caught on camera smacking his scarf off the back of his seat repeatedly. It was becoming too much for some of them, especially knowing they would be losing the title to that lot across the way. Yet another thing for them to lorde over the “noisy neighbours”.

Literal seconds later, Aguero drops into the pocket to receive the ball, passing it off to Balotelli, who slides it back to the Argentine for him to smash home the winner. You could live another hundred years and never see another finale like it.

Just a year before losing in extraordinary circumstances to Roma, Barcelona had defeated another team in arguably the greatest comeback ever seen in the sport.

The Parisian outfit won the first leg 4-0, a result that was viewed by many as the club’s long-awaited arrival on the big stage of Europe’s elite. Before the second leg, however, a video emerged of Marco Verratti, Julian Draxler, Blaise Matuidi and Thomas Meunier discussing potentially losing to Barça. Verratti asks his teammates if they’d be happy to lose 5-1 and still progress.

Fate was tempted, as PSG capitulated at the Nou Camp, losing 6-1 on the night. Edinson Cavani did score an away goal in the second half that appeared to effectively kill off the tie, but three goals from the 88th minute(!) onwards saw the Catalans progress to the next round.

It was probably Neymar’s finest performance for the Blaugrana, spearheading the late onslaught on a night when Lionel Messi was unusually subdued, although the Brazilian would eventually swap sides for a world record transfer fee. Barcelona subsequently bowed out quite meekly to Juventus in the next round, robbing everyone of a potential El Classico final.

Most remarkably of all, Sergi Roberto got the glory with his winning goal at the death, while the likes of Lionel Messi and Andres Iniesta were surprisingly subdued.

Best of the 2010’s: Our Premier League awards for the end of the decade

Few Premier League matches have been as exhilarating, absurd and consequential as Crystal Palace’s 3-3 draw with Liverpool in 2014. It had echoes of Newcastle United’s 4-3 defeat to Liverpool in 1996, in which the Magpies’ gung-ho style cost them the game, and their title hopes with it.

The Reds, still recovering from a devastating 2-0 home defeat to Chelsea the previous week, were now the ones chasing Man City, who led the league on goal difference. They pummelled the Eagles in the opening 55 minutes with scores from Joe Allen, Daniel Sturridge and Luis Suarez in the belief that, while it was unlikely City would slip up in the run-in, they could possibly make up the difference in goals.

Then, with 11 minutes remaining, centre-back Damien Delaney scored a pearler of a long-range strike to get one back. Two minutes later Dwight Gayle got another. Suddenly all the painful memories of the club’s previous failures came rushing back to the fan’s minds, perhaps even the players. Was this really happening?

Their worst fears came true when Gayle grabbed his second in the 88th minute, plunging the Merseysiders into complete and utter despair. The title was well and truly gone now. To make it worse, that infamous night was christened Crystanbul, recalling another notorious comeback involving Liverpool. For fans of literally every other club though, this was one of the most enjoyable and memorable nights in Premier League history.

As hosts of the World Cup, the expectations and pressure on Brazil in 2014 were massive. They perhaps didn’t have the most complete squad in the competition, but they had home advantage and used that emotional edge to get them all the way to the semi-finals.

There they met the ultra-refined Germany, but would do so without an injured Neymar and suspended Thiago Silva. It was a recipe for disaster, which turned into the darkest day in the history of Brazilian football since Uruguay defeated them in the 1950 World Cup final at the Maracana.

64 years later, at the same stadium, the German dished out a hellacious beating. Brazil came out all guns blazing, but it played into their opponent’s hands. Thomas Müller opened the scoring after 11 minutes, before another four goals in a six-minute spell shellshocked the home crowd.

It was a surreal viewing experience, one which the viewer couldn’t help but laugh at the ridiculousness of it all. The worse it got though, the more pity one felt for the Selecao. This was no longer a football match, but a national humiliation. When the sixth and seventh goals went in, it somehow lessened the Germans’ achievement. It was as if they were beating up on a schoolboys outfit.

Oscar scored in injury time to add a minuscule degree of respect to the scoreline, but there was no way of erasing the psychological scar of this pummelling. There were more competitive and entertaining fixtures than this over the last ten years, but none were as significant and compelling.

Read: The Premier League team of the decade

See Also: The top five football books of the decade