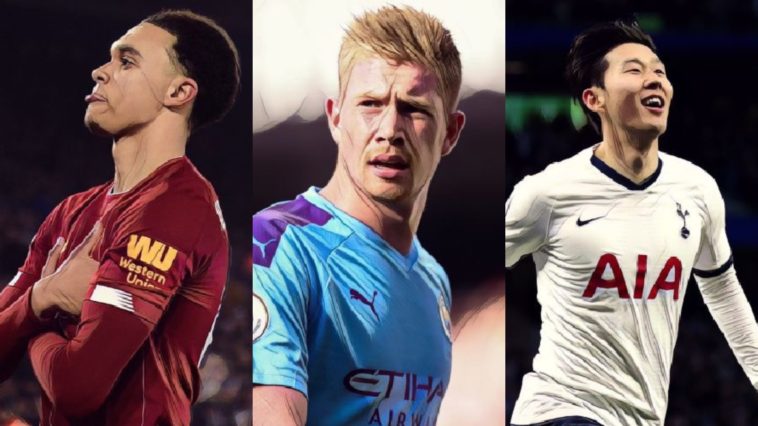 It’s that time of year where we reward the very best of the Premier League campaign just gone by.

At this point we would usually be coming into the last week of the season, already knowing who would be champions, who would be fighting for their survival down around the dropzone, and who would be duking it out for a place in Europe.

But of course, there is no ‘usual’ with regards to this year’s Premier League and no one can know whether there will even be an end to the 2019/20 campaign.

With that in mind, we might as well go about doling out our annual awards, with some new categories sprinkled in among the regulars such as best player, manager and goal of the season.

Moment of the Season – Jose Mourinho’s change of mood

Awarded for the most entertaining and/or funniest moment of the 2019/20 campaign.

This was a straight two-horse race and a very difficult decision to make, but Tottenham Hotspur manager José Mourinho’s sudden mood change against Manchester City after he realises that Raheem Sterling is on a yellow card is simply unbeatable. Classic José.

Awarded to the player with the best performances throughout the 2019/20 campaign.

Is there a credible argument that Kevin De Bruyne isn’t the best pound-for-pound footballer in the Premier League currently? Because if there is we are yet to hear it.

People will argue the point about Mo Salah, Raheem Sterling and Sadio Mané, no doubt, yet there can be very little argument about the fact that the 28-year-old is on top of the mountain right now (if not the league). And not only is he the best player, but he has had the best season bar none.

De Bruyne’s eight goals and 17 assists in the league are the best he has had in a single campaign since nabbing 10 and 20 respectively for Wolfsburg, and given how well he was playing before the Premier League was suspended there would have been few betting against him to better that tally – and beat Thierry Henry’s assist record in the process.

Given the PFA Player of the Year was awarded to Liverpool players despite Man City winning the past two titles, it would only be fitting for a Man City player to win it this season with Liverpool finally (eventually, maybe) getting over the line.

No individual Liverpool player has lit it up in a manner comparable to Virgil van Dijk or Mo Salah in the past two seasons, which is why Jordan Henderson has emerged as a favourite for the award, because of his leadership and tireless fighting spirit, but it should really only be going to one man.

Liverpool have been phenomenal as a team, but none of them have had as good a campaign individually as the Belgian midfield maestro.

Goal of the Season – Heung-min Son, SPURS vs Burnley

Awarded to the player with the best individual goal of the 2019/20 campaign.

Heung-min Son has created some spectacular moments since joining Tottenham Hotspur, but the one that will be replayed on every showreel once he’s retired will be the monster run and finish he completed against Burnley this past December. Unstoppable, unbeatable, sublime.

Awarded to the player under the age of 23 with the best performances throughout the 2019/20 campaign.

Thus far, Trent Alexander-Arnold’s senior career has consisted of: winning the Champions League, being a key cog in two title challenges, being one of the best players in bringing Liverpool to the cusp of their first league triumph in 30 years, breaking the assists record for a defender and equalling that record this past season.

It is bonkers to see what he has achieved in his career in such a short space of time and it’s even more mind-boggling to think what he could still achieve in the next decade. With playmaking ability that would make David Beckham flutter, Alexander-Arnold could be the lynchpin of Liverpool and England for a long time to come.

Awarded for the best managerial performance over the course of the 2019/20 campaign.

As alluded to earlier, there is a tendency to reward the winning team with the individual prizes but what Wilder has achieved with Sheffield United has been nothing short of remarkable.

Last season they weren’t even in the conversation for promotion before the campaign got underway. Almost two years later and the club is within sniffing distance of the Champions League places. And Wilder has achieved this without spending very much money in the transfer market at all.

The eye-catching thing about the Yorkshire native is that he has the air of a proper football man, an old school manager with a style of football to match, but he himself refutes that characterisation out of hand. Not only is his approach to the game innovative and unique, but he has been a breath of fresh air in his media dealings too.

Jurgen Klopp has done phenomenal work with Liverpool and is arguably the top manager on the planet right now. But Wilder’s rise from the lower leagues to the European spots of the top flight is simply too hard to ignore.

Awarded for the best piece of business completed by a club in the 2019/20 season.

When Liverpool sold Danny Ings to Southampton for £20m last summer, it was widely considered to be a smashing piece of business by the Reds. Not only had they offloaded a player who had struggled badly with injuries during his entire spell at the club, but they had made a tidy profit on the £7m they paid Burnley for him.

Add to that the fact that the Merseyside outfit have regularly pillaged the Saints for talent over the years and it felt downright insulting that they would charge so much for a striker who no one knew if he could still cut it in the top flight. But he has turned out to be worth every last penny.

Ings has scored 15 league goals this season, the fifth most of any player. He is also the only player in the top five goal scorers to have not scored from the penalty spot, meaning all of his goals have come from play.

In the early months of this season Southampton looked as they were going to be mired in a relegation battle once again, particularly after losing 9-0 to Leicester City in October. But the South Coast outfit have since bounced back in a massive way with Ings’ goals integral in that endeavour.

Awarded for the worst piece of business completed by a club in the 2019/20 season.

It should be noted that this decision bares very little reflection on Joelinton, who is clearly a talented and very useful player – just not in the manner he has been deployed.

Newcastle United spent a whopping £40m on him last summer, but Steve Bruce has used him as a target man which is, plainly, not the best use of him. His game is more suited to build-up play and playing off of a partner upfront, rather than battling for aerials, holding it up and leading the line as a lone striker.

If Mike Ashley does manage to sell the club, maybe the Magpies can find the Brazilian an attacker with whom he can actually link up.

Assist of the Season – Jorginho to Tammy Abraham, Watford vs CHELSEA

Awarded for the best pass or cross that lead directly to a goal in the 2019/20 campaign.

A magnificent first time pass by Jorginho over the top of the Watford defence and into the grateful feet of Tammy Abraham in November showed why Chelsea spent so much money on him in the first place.

Awarded to the player who has shown the greatest improvement upon last season in the 2019/20 campaign.

Adama Traore has always been blessed with tremendous pace and strength, which is what attracted Barcelona to him when he was a youngster, but he’s never been able to realise his true potential. Until this season, that is.

Wolves manager Nuno Espirito Santo has been able to get the very best out of the winger, using his unique frame and build for maximum effect. Traore has provided four goals and seven assists in 22 starts (and six substitute appearances) for the club, whereas last season he only provided a goal and an assist in eight starts (29 sub appearances).

The Spanish-Malian player has been a menace for opposing defences trying to deal with his near unstoppable dribbling, completing 123 successful dribbles – second only to Wilfried Zaha (138). He also moved the ball a total of 10,514 yards this season, the fourth most in the league behind Jack Grealish, Zaha and Harry Maguire.

Awarded to the best new player to arrive in the Premier League in the 2019/20 campaign.

Teemu Pukki and Todd Cantwell may have garnered the most headlines with regards to Norwich City‘s Premier League campaign, but Emiliano Buendia has demonstrated that of anyone on the Canaries team he is the one who is worthy of a spot in a top-half squad.

The Argentine playmaker was integral to Norwich’s promotion campaign and has been similarly important to their survival hopes, even if the Norfolk outfit appear destined for the drop. He has so far contributed seven assists in 28 appearances.

If Buendia can improve upon the defensive side of his game then he can look forward to a long career at a top-six Premier League club.

Awarded to the player who provided the most entertainment every time they got the ball in the 2019/20 campaign.

It took Allan Saint-Maximin a while to break his duck for Newcastle, but he has been one of their best players this season regardless of a lack of goals.

The Frenchman has been twisting defenders inside out all year long, delighting the Toon faithful with his quick feet and hypnotising trickery.

Saint-Maximin has contributed five goals and three assists in all competitions for a side that doesn’t find the net all that easily, but his best moment came in the FA Cup fourth round when he scored an extra-time winner against Oxford United – and it was a screecher to boot.

Just blessing your timeline with @asaintmaximin goal against Oxford in the FA Cup 🙌⚫️⚪️ #NUFC pic.twitter.com/3vALoLKCab

Awarded to the best rookie footballer for whom 2019/20 was their first campaign of senior football.

There aren’t very many young players who come straight out of academies and into senior Premier League squads without either getting game time out on loan somewhere else or getting the odd substitute appearance at the end of relatively meaningless matches.

That’s what makes Brandon Williams’ sudden rise to the Manchester United first team so remarkable. No one expected the 19-year-old to break into the first-team this season, but Luke Shaw’s topsy-turvy form forced Ole Gunnar Solskjaer’s hand and gave him an opportunity.

A promising start to life in the #MUFC first team for Brandon Williams this season 👏 pic.twitter.com/sdiEfUSnql

It’s one he hasn’t wasted, showing a level of composure and sure-footedness beyond his years. The English youngster is adept at protecting the ball when in possession, but he is also dangerous in attack, as he showed with his thunderous goal against Sheffield United at Bramall Lane.

Williams has featured in every match of Man United’s run to the semi-finals of the League cup, every FA Cup match thus far, started five Europa League matches, and made 12 Premier League appearances. We will be keeping our eyes peeled to see just how far he can go in his career after such an impressive start.

Read: How Les Ferdinand’s legendary career was shaped at QPR