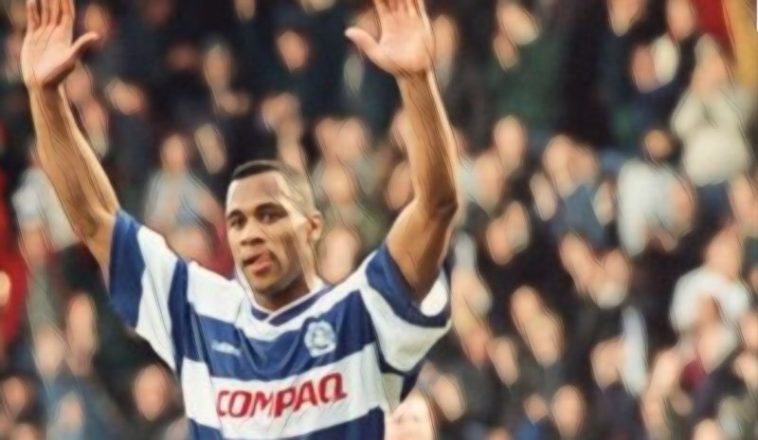 Every time Ian Holloway goes to the toilet at home he is reminded of Les Ferdinand.

Hanging proudly on the wall is a plaque with a simple message: “The secret to having it all is knowing that you already do.” Those words take Holloway, now a veteran manager, back to a different time.

To his days as a workhorse midfielder for Queens Park Rangers in the 1990s where, in a sliver of west London near Shepherd’s Bush, he watched up close as Ferdinand, by now in his mid-20s, finally realised the extent of his potential.

“That saying, it’s all about Les. That came out of Les. ‘The secret to having it all is know that you already do’. That was Les,” Holloway beams when telling The Football Faithful.

“Seeing the way that young man developed as a player and a person, it was a privilege to be there for it. And I’ve got to be honest, it’s all down to hard work. Les worked so, so hard.”

“I swear to you, and all the young ones coming through in the game need to know this, those who reach the very, very top aren’t there because they’re lucky or because it was easy.

“They are there because they work harder than anybody else. They deserve it, and I saw that with my own eyes with Les.”

Before he moved to Newcastle United in 1995 for £6 million, forming an axis with Alan Shearer that almost swung the balance of power in England in the direction of the St James’ Park from Old Trafford, Ferdinand was at a crossroads in his career.

“He was the player everyone raved about as having all the talent in the world and so much potential,” Holloway says. “There was a lot of pressure for him to deliver.”

Under the guidance of manager Gerry Francis and the late, great Ray Wilkins, not to mention one or two unfamiliar names with pivotal influence, Ferdinand duly did so. QPR was the making of the star that would be dubbed “Sir Les.”

Sir Les didn’t mess about did he! 💥 pic.twitter.com/ftjYJyvVlP

He may have been one of the Premier League’s early poster boys, but Ferdinand’s route into the professional game in the late 80s came via non-league Hayes, where he also worked as a painter-decorate and a delivery man for computer repairs.

In the first season of the newly-established Premier League, QPR finished fifth, the highest of the six London clubs in the 22-team division, with the 25-year-old striker’s 20 goals firing them up the table above Tottenham, Arsenal, Chelsea, Wimbledon and Crystal Palace.

His scoring tally was second only to Teddy Sheringham so, finally, Ferdinand was feeling like he belonged at the elite level.

He had already enjoyed a successful loan spell with Besiktas when he was 21, becoming the first British player to ply his trade in Turkey, but it was only when Wilkins took him under his wing and Francis worked his magic on the training ground that Ferdinand blossomed into an England international.

“He was so quick and strong and good in the air, it was like he was bouncing on a trampoline when he would leap for headers,” Holloway laughs.

“But the big thing for Les was belief. The turning point for him was when [striker] Gary Penrice went to Gerry and said ‘good God, come look at how good he can be’. So Gerry took five or six of us with Les and worked on his game.

“We went through when to make certain runs, how to make them, his timings, how we should play balls for him. All the training was geared towards Les. It didn’t take long for him to realise.”

Wilkins was a key reason for that, as much for his advice on the pitch as off it. “I remember it like it was yesterday because I was sitting at the same table for lunch. He pulled Les and spoke about how to be the part you’ve got to look the part and carry yourself in the right way.

“He spoke to him about driving the car he wants, walking around owning the clothes he wants. To go for it, to be who you are because you’ll make it. That was the thing with Ray, he would tell all of us that we were much better than you think you are. But with Les there was no limit to what he could be.”

His first taste of that senior international set-up in February ’93 did open his eyes to the next level, though. “He realised he needed to get fitter,” Holloway explains. “We used to do runs from one 18-yard box to the other, maybe 16 or 18 of them. Les would win the first six and then get tired, I would win the last ones.

“I was nowhere near as quick as Les so he worked and worked on that until he was running the last one like it was the first. It was a joy to watch that development in his mentality.

“But he never changed his personality. He was always the same fella, he wasn’t someone born with loads of confidence. He certainly never had arrogance. But he got quicker and stronger and it felt like he was invincible. He became a machine.”

It was December ’94 when Wilkins received a phone call from Alex Ferguson looking for the lowdown on Ferdinand’s character. A glowing reference was all the Manchester United manager needed to put the wheels in motion for a move.

In a bizarre turn of events, Francis resigned on the spot when he was informed his star player was to be sold. Faced with the prospect of losing Ferdinand and Francis in the space of a week, the QPR top brass cut a deal with Wilkins, now a Crystal Palace player, to return as a player-manager.

He duly did so but only on one condition, that Ferdinand wasn’t sold until the summer. With the United deal off the table, Ferdinand continued to score goals, hitting 24 in the league before departing for Newcastle.

“Les has a wonderful smile and I remember Gerry’s old assistant Frank Sibley and one of the coaches, Roger Cross, would always want to make him smile and laugh all the time in training,” Holloway recalls.

“Gerry might be the one who was harder on him during a finishing drill saying stuff like “oh, you’ve got to take that if you want to get to the top’ but Roger and Frank would make him laugh and try to let him enjoy the fact that he wouldn’t always score.

“They would tease him, ‘oh, that’s another few more quid gone’ or ‘we might not finish top now if you’re missing those’. You had to be around it to understand. It was a safe place they created for Les to practice and grow as a player.”

They provided the stage and while his star eventually shone brighter at Newcastle, QPR was the making of this Premier League great.

Read Also – Eric Cantona and how he made us feel