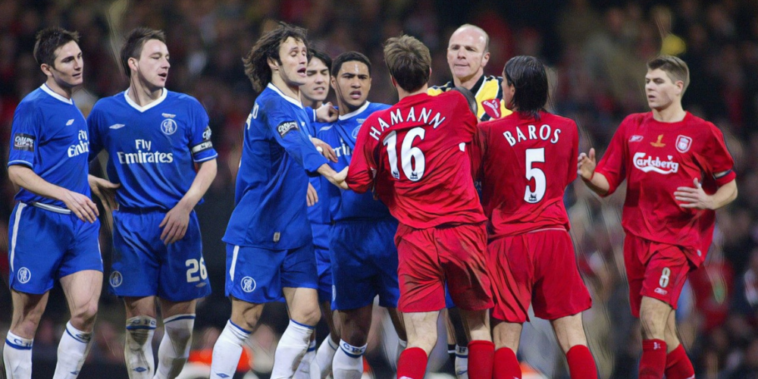 When it comes to rivalries that defined a generation, Chelsea and Liverpool were the standard bearers in the noughties.

During this period they seemed to always find each other in cup competitions and in Europe. In non-Premier League matches alone, they played 14 times between 2003 and 2009. Familiarity breeds contempt as they say, and this contempt quickly boiled over into outright hatred.

During this period the South West London outfit were enjoying the benefits of having a new mega-rich owner, picking off the biggest talents in the world as if it was Football Manager set to easy mode. This pissed off supporters of just about every club, but maybe none more so than Liverpool, who were yearning for a return to the glory days of the seventies and eighties.

“You’ve got no history” they would jeer, ignoring the fact Chelsea had actually been more successful than Liverpool in the six years prior to Roman Abramovich’s takeover. Naturally, Chelsea fans didn’t take too kindly to that, contesting that no club, no matter how glorious their past, had a divine right to glory in the present. Throw in the natural animosity between north versus south and these two were destined to despise one another.

This is a fixture that has been dripping in unabated narrative ever since, with so many moments marking it out as one of the great rivalries; from Jose Mourinho winning his first trophy in England in the League Cup final against Liverpool and Chelsea losing their monster 86 game unbeaten home run, to Fernando Torres dramatically swapping sides for a record transfer fee and many more.

Although the rivalry has not been as intense in recent years, this is a fixture neither side are keen to lose and both will be going full throttle to win this weekend.

The seven greatest moments in the Chelsea-Liverpool rivalry:

Jesper Gronkjaer arguably changed the Premier League forever. He probably didn’t realise that when he scored the winning goal against Liverpool on the last day of the 2002/03 season, but the landscape might look mighty different had he not.

Both sides went into that meeting with identical records – 18 wins, 10 draws, 9 defeats – meaning the winner would qualify for next season’s Champions League. The Blues came out on top that day, 2-1, finishing ahead of the then four-time European champions in fourth place.

What’s often forgotten is that Chelsea were in financial turmoil at the time and were facing an existential reckoning that summer. The Dane’s goal that fateful day has since been credited with saving the club, as the promise of Champions League football lured Roman Abramovich’s vast riches to SW6.

The Russian oligarch may well have bought the club anyway, but as we know they weren’t the only team he took an interest in, with both Arsenal and Tottenham Hotspur on his radar. Had Abramovich taken his money elsewhere, Chelsea could well have ended up as the next Leeds United.

Two years after buying the club and Abramovich was getting close to his dream of owning a Champions League-winning team. In his first year of ownership, Chelsea reached the semi-finals under Claudio Ranieri, losing to Monaco.

They would reach the same stage a year later under Jose Mourinho, who had led an unfancied Porto to the trophy just a year previously. His side dominated the Premier League from the get-go and it appeared the Portuguese manager would give them the added pedigree to go one step further in Europe.

But knockout competitions are another beast altogether, every now and then confounding the accepted logic of the best always rise to the top in sport. That’s the only way to describe Liverpool’s triumph in 2005, in which they defeated AC Milan in one of the craziest finals of all-time.

#OnThisDay in 2005, @luchogarcia14 netted THAT goal against @ChelseaFC to send us to Istanbul 🙌 pic.twitter.com/ieQydfLMKs

In the preceding round, both Liverpool and Chelsea engaged in a cagey affair with very little separating the sides. The first leg at Stamford Bridge ended 0-0, and the return fixture was decided by the tiniest of margins when Luis Garcia ‘scored’ in the third minute. In truth, no one knows if the ball fully crossed the line before William Gallas could clear it. Today, Hawkeye would give us the answer in a matter of seconds, but at the time everyone just had to accept the referee’s decision.

Ironically, if the two teams could have swapped places, Liverpool might have preferred to win the league and let Chelsea have the European glory. But from that moment this fixture would never be the same again; a deep animosity between the two sets of fans was born and would resurface over and again in the next few years.

Liverpool could justifiably feel like they had some sort of mental hoodoo over their London foes following their European success.

The two drew each other in the same Champions League group – after the Reds were granted special dispensation by UEFA to enter the competition despite finishing fifth in the league – because of course they were, and both games ended 0-0.

Chelsea, however, put that notion firmly to bed that October when they thrashed them 4-1 in the league. It was Liverpool’s biggest defeat at Anfield since 1969, when Manchester United beat them by the same scoreline.

This match was also notable for newly signed Didier Drogba showing off the devastating effect he could have on a football pitch, something we would become very accustomed to over the years.

For four consecutive seasons, these two sides kept facing each other in the Champions League. There was no separating them, and frustratingly for Chelsea, they could not get one over the Liverpudlians.

They met in the semi-final again in 2007, with the Londoners winning the first leg 1-0, but were overturned in the second and lost on penalties. A year later they reached the last four for the fourth time in five years, and it was only natural they would have to beat Liverpool to finally make their first final.

Chelsea did just that, beating their stubborn opponents 4-3 on aggregate, and yet this contest doesn’t get as much attention as some of their other meetings down the years.

It absolutely should, though: the game was back and forth, Fernando Torres was doing Fernando Torres things, Michael Essien had a goal disallowed, Drogba scored one of his typical penalty box goals, Ryan Babel scored a golazo, and Lampard netted the winning penalty just days after his mother died.

One of those tit-for-tat battles that could have ended in any scoreline and which no one wanted to end. Having lost the first leg of this Champions League quarter-final 3-1 at Anfield, Liverpool needed to fly out of the traps in the return leg and that they did.

Fabio Aurelio (remember him?) opened the scoring with a cheeky but clever free kick in the 19th minute, before a Xabi Alonso penalty made it 2-0 just before the half-hour mark. All of a sudden the Reds were the ones in the driving seat, but not for long.

Six minutes after the interval Drogba pulled one back thanks to a Pepe Reina howler, and another six minutes later Brazilian defender Alex got the equaliser with a rocket of a free-kick. There was finally some respite for 19 minutes, before all hell broke loose.

Lampard scored in the 76th minute, seemingly sealing the deal, only for Lucas Leiva and Dirk Kuyt to score twice in quick succession. One more goal would see them through to the semi-final, but Lampard scored a deliciously satisfying goal that bonked off both posts before settling in the net.

One of the most entertaining contests in the competition’s history, it eventually finished 4-4.

Whatever else happened in this match, they were obliterated into insignificance when Luis Suarez, for the second time in his career, took a bite out of Branislav Ivanovic.

The Uruguayan striker didn’t receive a card for having an early supper, although he did receive a retrospective ten game ban from the FA. Undeterred, he went on to bite Giorgio Chiellini at the 2014 World Cup in Brazil.

To compound matters for the Chelsea, Suarez scored an equaliser in the seventh minute of added time to end the game 2-2. Ouch.

After almost two and a half decades without a league title, 2014 was going to be the year Liverpool finally grabbed ahold of the holy grail. And then a familiar foe showed up.

Jose Mourinho came to Anfield in April with the sole intention of stopping the home side from playing in their usual swashbuckling style which was working so well under Brendan Rodgers. Chelsea sat deep, played on the counter, time wasted, and waited patiently for the opposition to make a mistake for them to take advantage of. And that’s exactly what they did.

Steven Gerrard miscontrolled a routine pass and, in his attempt to reclaim the ball, slipped and allowed Demba Ba to steal possession for a one-on-one with Simon Mignolet. The Belgian goalkeeper couldn’t stop the striker from dispatching the opening goal of the game.

Liverpool, try as they might, could not rescue the game and ended up losing 2-0, derailing their seemingly unstoppable title tilt. Mourinho took special delight in victory, slapping the crest on his jacket in front of the away support.

Five years on and the Reds are stronger than ever, once again fighting for a shot at the title. This weekend they arrive in Stamford Bridge, but it is Chelsea who have the young, idealistic manager while Liverpool have the experienced man in charge of an expensively assembled squad. The tables have turned, but is there another upset on the cards?