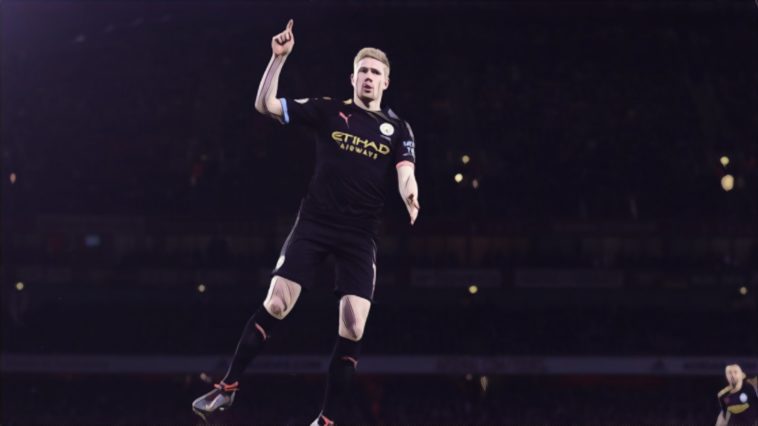 Fernandinho makes a driving run through the heart of the flailing Arsenal midfield, skipping past the static red and white figures at ease. The Brazilian passes the ball into the final third, releasing his compatriot Gabriel Jesus behind the backline.

Picking the ball up on the left side of the box, Jesus knocks the ball into the penalty area where Raheem Sterling and Phil Foden are waiting for the pull back. The pass misses both, but finds another Manchester City teammate waiting on the fringes.

The ball bounces in his direction at an awkward height and speed, around shin high and probably too fast to control before being closed down. It would be extremely easy to mishit and make oneself look foolish with such a chance, but without even needing to think about it he side foots it on the half-volley into the roof of the net from about 14 yards out.

This was just two minutes into the Belgian’s finest performance of the season, a 3-0 win over the Gunners at the Emirates Stadium in which he was directly involved in each goal.

Following some excellent buildup play, De Bruyne set up the second by rolling a pass across the six-yard box for Sterling to tap in (which, for some reason, the Premier League has not counted as an assist), a classic combination that has reaped many dividends this season. There were two defenders between him and Sterling, five in total inside the box, and he still found the winger.

For the third he shifted the ball onto his left foot before shooting from range, beating the helpless Bernd Leno in goal to seal all three points before half-time. He wasn’t satisfied with that, however, and almost scored his first ever hat-trick with another long-range effort, but it smacked off the post, forcing a whimper out of co-commentator Jamie Carragher.

On that cold December night, his partner in the booth Martin Tyler commented, “he made that look easy and I promise you it wasn’t.” The essence of Kevin De Bruyne was captured by the utterance of those 11 words. Everything looks effortless, as if it would be easy to pull off by you or I. Ask any of his peers and they will tell you it really isn’t.

What looks like the ‘easy’ option or a ‘simple’ pass is, in fact, the work of a prodigy at the height of his powers. That performance against Arsenal was immediately dubbed a “masterclass” by just about everyone, showing off the full gamut of his capabilities, but the greatness of De Bruyne is in his ability to repeatedly make the impossible seem plausible.

Take his assist for Jesus’ goal in the 6-1 win over Aston Villa at Villa Park. Carrying the ball around 25 yards into the opposition third, De Bruyne is running at just about full pace before releasing the trigger and hitting an inch-perfect 28 yard pass that eliminates the entire defence. The striker has the straightforward task of tapping the ball in, but it’s been made by the genius of a scintillating playmaker.

The caveat is that he completed this move against arguably the weakest defence in the league, but how many players on the planet right now can make that pass in any circumstance? It’s an incredibly short list. And he does so without ever making it look difficult.

That’s why De Bruyne is not just the best midfielder in the league, but probably the world too. And it’s also why he should be the obvious choice for Player of the Year this season.

De Bruyne’s eight goals and 17 assists in the league are the most he has had in a single campaign since nabbing 10 and 20 respectively for Wolfsburg in 2014/15, and given how well he was playing before the Premier League was suspended there would have been few betting against him to better that tally – and beat Thierry Henry’s assist record in the process.

That alone should be enough to put him over the top in the conversation with Mo Salah, Raheem Sterling, Sadio Mané and, most of all, Jordan Henderson. And yet the Liverpool captain is still the favourite to pick up the PFA accolade, whenever that finally happens.

The Reds’ success this season has been a truly collaborative effort, with no one player having the kind of individual campaign that made Mo Salah and Virgil van Dijk impossible to ignore when it came to awards season, despite the fact Man City were sweeping up just about every trophy in sight.

And that’s why Henderson has emerged as a likely winner. In lieu of a dominant force in one of the most dominant teams we’ve ever seen, Henderson – winner of the BBC’s Player of the Year – has been singled out because of what he represents, not what he does per se. He’s a symbol of the leadership, passion and never-say-die attitude that Jurgen Klopp has instilled in his troops over the years.

While that would be enough for him to be worthy of the club’s player of the season, it is far from enough for the PFA or the FWA. Or at least it should be, as Henderson is not only not the best player in the top flight, he’s not even the best player in Liverpool. That is not to diminish his accomplishments as team captain, but rather put them in the appropriate context.

De Bruyne has, for quite a while, been playing at a level that Henderson has never reached and never will reach. It wasn’t that long ago that the Sunderland native was moved from the number 6 position back to number 8, simply because he doesn’t possess the ability and versatility to complete the role.

There is simply no comparison between the two. Just look at the recent comments by Henry himself when talking about the player he used to coach as part of the Belgian national team setup.

“He’s an amazing player, it’s just stupid what we are witnessing and I hope people in football do realise that the boy is just not normal,” the Frenchman told Sky Sports The Football Show.

“His brain is somewhere else, it’s just ridiculous and I came across him and worked with him and he’s one of those guys you just have to let play because if you start to understand and comprehend what he’s doing, you’re going to have a headache. He’s on another planet.”

Before the season began De Bruyne was our overwhelming favourite to finish the season on top of the mountain, and while he won’t be receiving a third league winner’s medal, it would be fitting for him to take home the biggest individual prize in English football considering it’s gone to players in red twice in the last two years.

If he doesn’t, then we might be looking back in ten, twenty years time wondering, “how on Earth did they not give it to him?”

See Also: David Ginola was not a great goalscorer, but a scorer of great goals