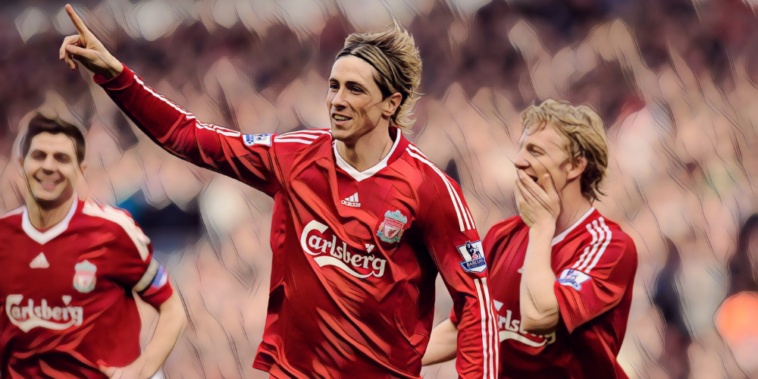 Liverpool face Atletico Madrid in the Champions League’s group stages this evening, knowing victory over the Spanish champions will assure the Reds of their passage to the knockout stages.

The two teams met in an entertaining first fixture at the Wanda Metropolitano last month and ahead of the return clash at Anfield, we’ve looked back at some notable names to have represented both clubs.

Here are five of the best players to have played for Liverpool and Atletico Madrid.

Garcia came through the ranks at Barcelona before shining during loan spells away from the Camp Nou, impressing sufficiently to secure a move to Atletico ahead of the 2002/03 campaign.

Nine league goals prompted Barcelona to activate a release clause to re-sign the Spaniard, though he spent just a single season back in Catalonia before reuniting with former Tenerife manager Rafael Benitez at Anfield.

Garcia became an integral part of Benitez’s new-look side and starred during the Reds’ run to Champions League success in 2005, scoring crucial knockout stage goals against Bayer Leverkusen, Juventus and a semi-final winner against Chelsea.

He added the FA Cup the following season – scoring again in a semi-final against Chelsea – before falling out of favour during his third campaign, returning to Atletico Madrid as part of the deal that saw Fernando Torres head to Merseyside.

He scored 30 goals in 122 appearances for Liverpool before two seasons at Atletico, later enjoying a nomadic career that included spells at Racing Santander, Panathinaikos, Atletico Kolkata and Central Coast Mariners amongst others.

Fernando Torres rose through the ranks at Atletico to become the club’s homegrown hero, emerging from the Madrid side’s youth system to establish himself as one of Europe’s most exciting talents.

Torres helped Atletico Madrid to promotion during the 2001/02 season and helped reestablish the capital club in La Liga, being named as club captain whilst still a teenager as his influence and importance to the side grew.

He scored 82 goals in 214 league appearances before becoming Liverpool’s record signing in 2007, moving to Merseyside in a deal worth around £20m and Luis Garcia heading in the opposite direction.

Torres began brilliantly with a goal on his home debut against Chelsea and continued to fire during a prolific first season, breaking the Premier League record for most goals scored (24) by a foreign player in their debut campaign.

Torres struggled to replicate his previous form at Chelsea and returned to Atletico – via a loan spell at AC Milan – in 2015, forming part of the side that reached the 2016 Champions League final before winning the Europa League the following season – ending a long wait for major silverware with his boyhood side.

Torres – who also won three consecutive major tournaments with Spain – is the sixth-highest goalscorer in Atletico history with 129 goals.

The least heralded of the names on this list, Emiliano Insua’s career with Liverpool failed to reach the heights it once promised across three seasons on Merseyside.

Insua made 62 appearances across all competitions for the Reds, including 30 league starts during the 2009/10 season as he broke into the side on a regular basis at left-back.

He scored his sole goal for the club with a stunning League Cup strike at Arsenal, before signing for Sporting Lisbon in 2011 after a season-loan loan move to Galatasaray.

Two seasons in the Portuguese capital persuaded Atletico Madrid to sign the Argentina international, with Insua winning both La Liga and the Copa del Rey with the Spaniards despite struggling for regular first-team football across two campaigns.

Rodriguez was a regular goalscorer from a wide position during his time with the Spanish side and netted 44 goals in 156 appearances, including scoring as Atletico met Liverpool during the 2008/09 Champions League group stages.

The winger signed for Liverpool on a free transfer in January 2010, but he struggled for consistency for much of his three-and-a-half-year spell on Merseyside.

Rodriguez achieved cult status, however, following an incredible run of form during the 2010/11 season, scoring seven goals in three games – including hat-tricks against both Birmingham and Fulham.

He also netted twice in important wins against Chelsea at Stamford Bridge and won the 2012 League Cup, scoring 17 times in 73 appearances before returning to South America with Newell’s Old Boys.

Luis Suarez will make his latest return to Liverpool this evening in the colours of Atletico Madrid, the forward having starred as one of the Reds’ greatest players of the Premier League era.

The Uruguayan signed for Liverpool from Ajax during the 2011 winter window and made an immediate impact with a goal on debut against Stoke, enjoying a period of adaptation before shining as one of the division’s leading lights.

Suarez scored 30 goals in all competitions during the 2012/13 season, before producing one of the Premier League’s most iconic individual seasons the following campaign.

Suarez scored 31 league goals in just 33 appearances as Brendan Rodgers’ side narrowly missed out on the title, winning the division’s Golden Boot and being named as both the PFA Player of the Year and FWA Footballer of the Year.

His performances attracted the interest of Barcelona who signed Suarez in a £75m deal, where he scored 198 goals across just six seasons and won four league titles and the Champions League.

Having been allowed to leave for divisional rivals Atletico in 2020, he inspired his new side to La Liga title success with a 21-goal haul last season and remains a formidable forward proposition despite his advancing years.