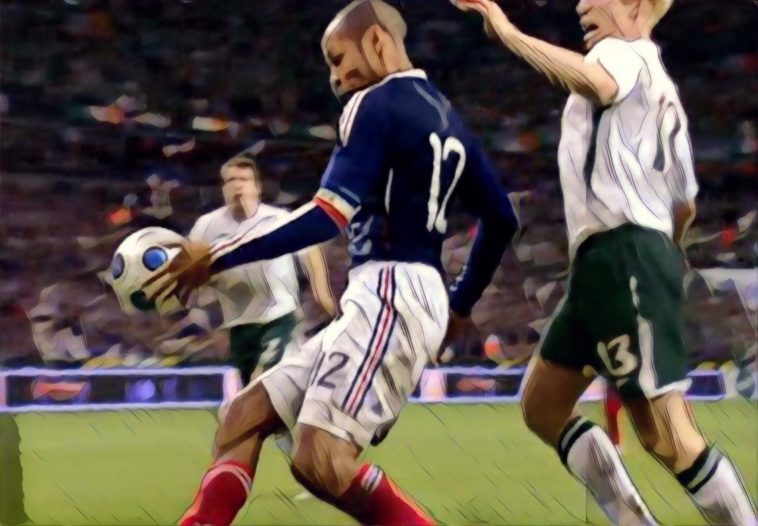 On the tenth anniversary of Ireland being cheated out of a World Cup place by a handball, we look back at some of the most grievous handballs in the history of football.

Ten years ago Thierry Henry controlled the ball with his hand twice before laying it off to William Gallas to score. It put a permanent asterisk next to his name and his legacy would never be discussed in the same way after that transgression.

It was the second leg of a World Cup playoff between France and Ireland at the Stade de France in which the visitors had thoroughly outplayed the favourites. Robbie Keane had given the Boys In Green a first-half lead, and they really should have won the game in normal time given all of the chances they had.

Then in extra-time, with Les Bleus desperate to keep their World Cup dream alive, the former Arsenal striker committed the infamous act. Shay Given raced out to the referee begging for him to make the right call. Henry celebrated with his teammates as if nothing had happened.

And that was that. Ireland would not be going to South Africa. The travelling support in the stadium didn’t even realise at the time what exactly had gone on, but word filtered through and disappointment quickly turned to anger.

The culprit sat down on the turf next to Richard Dunne, much to the bemusement and annoyance of every Irish person watching at home. The burly defender revealed this week that Henry admitted there and then that he handled it. The referee on the night, Martin Hansson, said this week that if he were to meet Henry now, “I won’t speak with him.”

The incident gave serious momentum to the arguments in favour of bringing video technology into the sport to review controversial moments such as this. Infractions such as this can now be punished if missed, but VAR has created a controversy all of its own.

For Henry however, there will always be a before and after handball.

Nine years ago Luis Suarez made a name for himself as striker at the World Cup in South Africa with performances and goals, but he also gained a worldwide reputation for being an utter shithouse.

When his native Uruguay faced Ghana in the quarter-finals, the game was tied in extra-time but the Black Stars were piling on the pressure late on. Just as it looked like they were about to make the breakthrough, Suarez stopped a shot on the line with his arm in a desperate attempt to save his team.

#OnThisDay in 2010, a handball by Luis Suarez prevented Ghana from scoring in the last minute and Asamoah Gyan missed the penalty – with Uruguay triumphing in the shoot-out to make the World Cup semis.#FifaWorldCup pic.twitter.com/3BmBJXXrKz

The future Liverpool forward was subsequently sent off and a penalty given against him. But his dastardly deed paid off – Asamoah Gyan cracked his spot kick off the bar, Uruguay won in a shootout and Ghana missed the opportunity to become the first African team to reach the semi-final stage.

In the World Cup quarter-finals of 1986, Diego Maradona scored arguably the greatest goal in the history of football. On the same day he also scored the most infamous goal ever, displaying the two sides to El Diez in the one game.

The Argentine playmaker opened the scoring when he leapt in the air and punched the ball past goalkeeper Peter Shilton into the goal. Standing at roughly 5 foot 6″, it was scarcely believable that the diminutive Maradona could ever beat Shilton to a high ball. But he cunningly encouraged his teammates to celebrate like crazy so as not to let on that anything was afoot.

It worked, and Argentina ended up winning the whole thing after beating Germany 3-2 in the final. The English, understandably, never quite got over it.

Read: Five of the best individual goals ever

A bizarre moment in the career of Paul Scholes, mainly because it’s not something you would have ever expected from the former Manchester United midfielder.

With his side trailing 2-1 to Zenit in the final few minutes of the 2008 Uefa Super Cup final, the Englishman jumped up to meet a cross and it looped over the goalkeeper and into the net. It looked great, but the only problem was he hit it with his hand.

It resulted in a second yellow card and an early bath for Scholes, but did at least result in Clive Tyldesley’s daft bit of commentary when he said “there’s nothing funny about that”.

This, on the other hand, was very funny. With Darius Vassell clean through on goal after rounding Shay Given, Steven Taylor stopped the striker’s effort on goal with his arm. Had he been a goalkeeper, it would’ve been one of the saves of the season.

In an attempt to fool the referee into believing he hadn’t handled the ball, he feigned injury, grabbing his side as if he had just been shot. The official was having none of it and duly sent him packing.

Somewhat fortunately for Taylor, the match was overshadowed by the brawl between Newcastle United teammates Kieron Dyer and Lee Bowyer. That wasn’t much consolation though, as the Magpies ended the game with eight men and lost 3-0.

During their incredible run to the Champions League semi-finals in 2001, Leeds United faced the mighty Real Madrid in the now-defunct second group stage.

The Yorkshire outfit took an early lead too, thanks to an Alan Smith left-footed shot. Their advantage lasted all of about a minute, however, as Real went down the other end and won a free-kick, which Luis Figo swung in for Raul. The Spanish striker scored, but it was clearly with his hand.

The referee failed to see the infraction however, and the goal stood. That was the difference maker in the end, as the home side won the tie 3-2.

Leeds qualified for the knockout stages regardless, but they were robbed of getting a famous result against the reigning champions.

What exactly Abel Xavier was thinking, we’ll never know, but his silly handball cost Portugal the chance to make the Euro 2000 final.

The semi-final between them and France was a closely contested match; Nuno Gomes gave Selecção das Quinas a first-half lead, before Thierry Henry cancelled that out just six minutes after the break.

The game went into extra-time and seemed destined for penalties, until Sylvain Wiltord took a shot at goal from an acute angle, which ricocheted out off Xavier’s arm.

It was an absolutely ludicrous thing for the former Everton and Middlesbrough defender to do when he could easily used his body or leg to block a shot that may not have even been going in. Zidane scored the resultant golden goal penalty, and the rest is history.

What is it with Argentinian, immensely talented short playmakers, and handballs? Lionel Messi joined the club in 2007 when he punched the ball into the Espanyol net, emulating his compatriot Maradona 21 years later.

Miraculously none of the officials witnessed it and the goal stood.