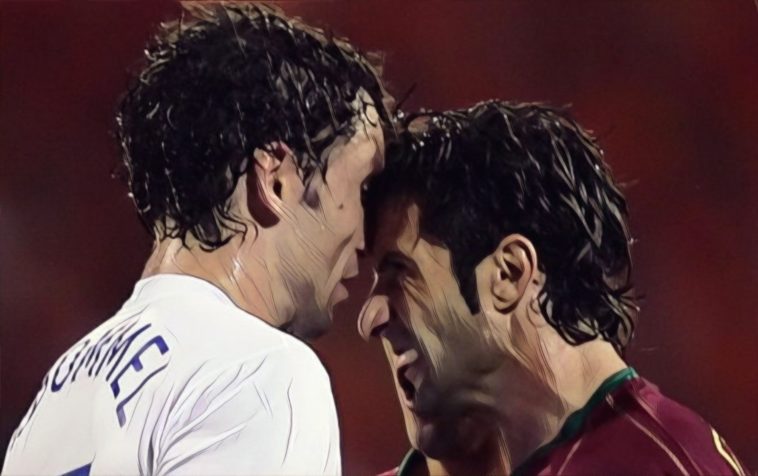 Pele once called football “the beautiful game”, but it isn’t always as attractive to watch as that famous line makes it out to be.

Many games of football don’t adhere to that adage. Some matches are so ugly, violent and dirty that they enter the history books, gaining notoriety for their hideousness.

A bit of physicality is expected, indeed sometimes encouraged, in football, but it can go too far. A rush of blood to the head, a lust for revenge, a mistimed tackle or a referee who is simply out of his depth can lead to a match that embodies only brutality and savagery.

Often we are grimly fascinated by these events, but they are rarely spectacles worth watching. Sometimes we wish they had never happened at all.

Five of the most brutal, violent matches in football history:

Quite possibly one of the worst World Cup spectacles of the past 30 years, Portugal and Netherlands’ last-16 encounter stands as one of the most unwatchable matches in the competition’s history, even if it wasn’t all that violent. Rather, this knockout game was an ugly contest that featured very little actual football, plenty of fouls and a card-happy referee.

The backdrop to this was FIFA’s attempt at stamping out violent and cynical fouling before the tournament began, which amounted to ordering the officials to yellow card just about everything. The flaw in this strategy should have been obvious from the moment it was suggested: if everything is a booking, then you just end up with more bookings, inadvertently punish good tackles, and are still no closer to solving the problem.

This match exposed the failings of this approach in the cold light of day, as referee Valentin Ivanov issued a record 16 yellow cards and four red cards. Naturally it was Mark van Bommel who set the ball rolling, receiving a yellow for a cynical foul inside the first two minutes, while Costinha was the first to get his marching orders for a second bookable offence – a completely brainless handball – just before half-time.

The second-half descended into pure chaos. Luis Figo headbutted Van Bommel, which led to Luis Felipe Scolari’s famous line, “Jesus Christ may be able to turn the other cheek, but Luis Figo is not Jesus Christ.” Khalid Boulahrouz received a second caution in the 63rd minute, Wesley Sneijder was booked during a touchline brawl, and Deco also received his second yellow with 12 minutes remaining.

Giovanni van Bronckhorst’s injury-time sending off was the icing on top of an extremely bitterly tasting cake that finished with nine men apiece and a 1-0 win for the Portuguese. The famous image of Van Bronckhorst, Deco and Boulahrouz sitting on the steps of the stand as the game played out was described as the “bad boys’ corner” by commentator Gary Bloom.

An ill-tempered First Division affair that led to the first ever abandonment of an English Football League game, Sheffield United versus West Bromwich Albion has its own special place in the annals of football history.

The match did display at least some sense of fine football before descending into absurdity, with splendid goals from Scott Dobie and Derek McInnes giving the Baggies a 2-0 lead. The game got off to a wretched start for the Blades, however, as goalkeeper Simon Tracey was sent off for deliberate handball in the ninth minute. Peter Ndlovu was the sacrificial substitute to get a new goalie on the field.

After conceding the second goal, United manager Neil Warnock made a double substitution in the 64th minute, but in a matter of moments both subs were back off the pitch. George Santos committed one of the worst two-footed lunges you’ll ever see, a ‘tackle’ that was surely revenge for the shattered cheekbone Johnson had inflicted on him a year previously. Fellow sub Patrick Suffo was sent off in the subsequent melee for headbutting McInnes. Unsurprisingly neither ever played for the club again.

Dobie made it 3-0 with 13 minutes remaining, before the real farce began. Michael Brown limped off soon after, before Robert Ullathorne went off with injury five minutes later. With United down to six men, the referee had no other option to call a halt to proceedings.

The Football League awarded West Brom the win and the three points, while Sheffield were fined £10,000, Suffo given a six game ban and a £3000 fine for violent conduct, Santos a six game ban and Warnock fined £300 for improper conduct towards the fourth official.

Albion manager Gary Megson was spot on in his estimation of the match, referring to it as “all that crap”.

When Chelsea faced Leeds United in the 1970 FA Cup final, the match finished 2-2 after extra-time and both sides engaged in a lap of honour around the Wembley pitch. The field was in such a rotten condition afterwards, though, that the replay had to be played at Old Trafford, and the atmosphere was considerably less good-natured.

Dave Sexton’s London outfit were considered as flashy and flamboyant southerners, while the Peacocks had gained a reputation as “Dirty Leeds” under Don Revie for their negative and cynical approach. The contrast in styles and geography added spice to this encounter and the return fixture became one of the most iconic matches in English football, for good and bad reasons.

The two teams were later praised for competing in such a determined manner in a highly competitive match, but were also criticised for being so overtly physical. Chelsea’s Ron ‘Chopper’ Harris lived up to his name by kicking Eddie Gray in the back of the knee, while Eddie McCreadie completed a flying kick on Billy Bremner’s head.

And those were only the most notable incidents in the game; Hutchinson and Norman Hunter also traded punches and Jack Charlton kneed and headbutted Peter Osgood, with plenty more niggle throughout the decider as well.

“Modern-day referee David Elleray reviewed the match in 1997,” according to Wikipedia, “and concluded that the sides would have received six red cards and twenty yellow cards between them, in the modern era of football.” And yet, Chelsea’s Ian Hutchinson was the only one to get booked through the 90 minutes.

The Blues won the replay 2-1 to secure their first ever FA Cup win having only lead the tie once across both matches.

The now defunct Intercontinental Cup saw the winners of the European Cup and Copa Libertadores face off in a two-legged tie every year. The most infamous edition of the competition came in 1967 when Glasgow Celtic faced Racing Club from Argentina.

The Hoops won the first leg at home 1-0 in an encounter fraught with cynical fouling and spitting, but the second leg was no better, ending 2-1 to Racing. With the tie level at one win apiece, a play-off had to be played to decide the winner, with Uruguayan capital Montevideo chosen as the neutral venue.

It was an utter disaster as a game and spectacle, as Racing set out to cynically foul their way through the match. Paraguayan referee Rodolfo Perez Osorio lost complete control of proceedings, while Celtic lost their cool and composure, retaliating to their opponent’s incitements.

It’s a bad sign when riot police have to intervene on the pitch, as four Celtic and two Racing players were sent off. The Argentine outfit won the tie 1-0 in the end.

Everyone thinks back to Netherlands versus Portugal when it comes to the dirtiest World Cup matches, but the most violent of them all happened in 1962 when Italy took on Chile – and not a single card was dished out.

Prior to the group stage encounter, the Italian press had some unsavoury words for the host nation, which amped up the animosity ahead of kick-off. The contest was more of a precursor to MMA fighting than a football match with filthy tackles, flying kicks and punches being thrown right throughout the 90 minutes.

The game remarkably reached a conclusion without the need for it to be abandoned, as Chile ran out 1-0 winners, but it would have a far-reaching effect on the sport. Referee Ken Aston was officiating that day and he was appointed Head of Refereeing for the 1966 World Cup in England, and following another tournament replete with nasty challenges, he came up with a solution.

While driving his car one day he stopped at some traffic lights, inspiring him with an idea that would change the game forever: red and yellow cards. The 1970 World Cup was the first tournament to introduce cards, giving referees a new means to stamp their authority on the game.

Read: The Battle of Oriel Park – When The Troubles and football collided

See Also: The English clubs with the most points gained since 1888