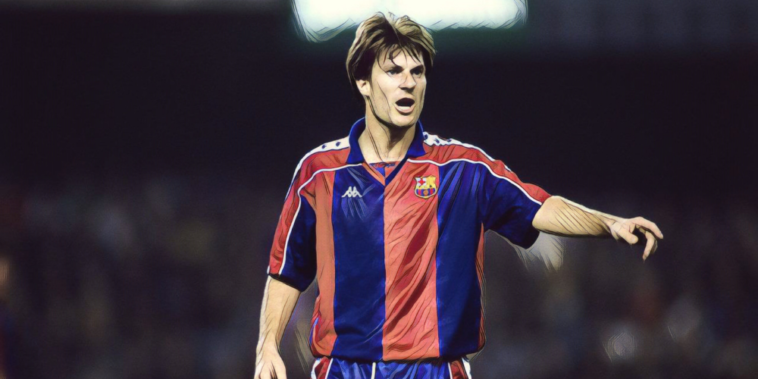 Football’s greatest have an innate ability to slow the process of a game, finding time when everything around them continues at startling speed.

Throughout the sport’s history countless icons have been described as languid, their natural ability sometimes confused with an effortlessness that makes mere mortals green with envy.

Michael Laudrup was one such player, capable of dominating an entire fixture or occasion without seemingly moving out of his very first gear.

The Scandanavian superstar drifted across pitches with a graceful gait, inviting challenges before feigning one way or another and releasing the perfect pass into the path of a teammate.

Laudrup is one of the best footballers of his  – or any – generation and the greatest to have hailed from his native Denmark, a view so widespread it borders on unanimous.

One look at the eulogies directed at the Dane paints a vivid picture of an artist whose greatest masterpieces came in the colours of Europe’s elite.

Laudrup’s emergence came at Kjøbenhavns Boldklub and later Brøndby, where the talents of a midfielder rich in promise were soon unearthed from suitors across seas.

Liverpool came close to signing the teenager Denmark Footballer of the Year in 1983, only for the deal to collapse following a change in contract terms and Laudrup instead sign for Juventus.

The foreigner rule in Serie A saw the midfielder initially spend two seasons on loan at divisional rivals Lazio, before winning the Scudetto upon his return to Juventus in 1985/86.

That summer saw Laudrup star as part of a Denmark side that remains revered to this day, as a side dubbed ‘Danish Dynamite’ made their presence felt at Euro ’84 and the 1986 World Cup in Mexico.

Neither tournament delivered silverware after a semi-final and last-16 exit, but the Dane’s exciting side won admirers if not tangible honours.

Sepp Piontek’s team contained wonderful footballers in Morten Olsen, Allan Simonsen and Preben Elkjær, but the emerging Laudrup became the jewel in the crown of a side who captured the imagination with their front-footed football.

After beating Scotland in their opening fixture of the ’86 World Cup, the Danes thrashed Uruguay 6-1 in their second game, a contest which included a wondrous solo goal from Laudrup as he shimmed and shifted his way through the defence to score an iconic individual effort.

Michael Laudrup scores a stunning individual goal for Denmark against Uruguay at the 1986 World Cup.

It proved the highlight of Laudrup’s career in a major international tournament, having been a glaring omission from the Denmark squad that upset the odds to win Euro ’92 following a disagreement with manager Richard Neilsen over his pragmatic approach.

Euro ’92: The brothers Laudrup and a very Danish fairy tale

Despite his emergence as a star, Laudrup’s time with Juventus was not always plain sailing and after four seasons with the Bianconeri, he signed for a Barcelona side beginning to rise under the guidance of Johan Cruyff.

In Laudrup, Cruyff found the total footballer for his Total Football side, becoming the Catalan’s creative fulcrum with his ability to unlock defences with dribbles, darts and probing passes.

From his arrival in 1989 to his departure five seasons later, there was arguably no finer footballer on the planet.

Laudrup’s omission from the illustrious list of Ballon d’Or winners is puzzling, to both those who played alongside him and those who witnessed the enigmatic magic he brought to Catalonia.

Laudrup was amongst the catalysts for the Catalan dominance, the composer of the side’s symphony and the ammunition line from which the likes of Hristo Stoichkov and Romario later feasted.

He was effortless and elegant, his first touch absorbent and his timing immaculate.

The croqueta —a skill in which the ball is transferred quickly from one foot to the other to slalom between tackles – became his trademark, his dribbling unrivalled amongst players of his era as he cajoled challenges from defenders before bursting away.

Add in his ability to find passes of near-impossible precision whilst on the run and Laudrup’s skillset was a recipe for impending greatness.

For Cruyff, he represented almost a footballing reincarnate of the Dutch icon himself, with the Barcelona boss eulogising about a talent capable of bringing his philosophy and principles to life.

“When Michael plays like a dream, a magic illusion, determined to show his new team his extreme abilities, no one in the world comes anywhere near his level.”

Their relationship, despite Laudrup’s public insistence otherwise, deteriorated however with Cruyff having served the midfielder a number of back-handed compliments during their time together.

There was a sense, from some at least, that Laudrup lacked the drive to truly become the defining player of his time, his languid style often giving the impression of a talent operating within himself despite an ability to transform ties at the highest level.

It was an assessment that Michel Platini – the resident superstar during Laudrup’s time with Juventus – certainly believed in, labelling Laudrup as ‘the best player in the world in training’ and questioning whether he suffered from his own selflessness.

Cruyff too wondered just where Laudrup’s ascent could have reached, had he been a product of a different environment.

“Had Michael been born in a poor ghetto in Brazil or Argentina with the ball being his only way out of poverty he would today be recognised as the biggest genius of the game ever.

“He had all the abilities to reach it but lacked this ghetto instinct, which could have driven him there.”

Cruyff and Laudrup’s increasingly fractious relationship reached its nadir following his omission from the Barcelona side for the 1994 European Cup final, sidelined as Romario, Stoichkov and Koeman were selected as the club’s three permitted foreign players.

The Catalan club were thrashed in a shock defeat to AC Milan in Athens, with Laudrup leaving soon after for the most controversial of destinations.

Having been integral to Barcelona’s rise to Spanish supremacy, his next challenge was to loosen his former side’s grip on La Liga in the colours of arch-rivals Real Madrid.

His impact was immediate.

Laudrup’s first season at the Bernabeu saw a renewed challenge from the capital club, as the Dane starred as the central figure in Los Blancos’ pursuit of the championship.

His first season saw Real Madrid crowned champions with Barcelona finishing a distant fourth, with the campaign including an unforgettable 5-0 win for Laudrup’s new side against his former employers.

Having been part of the Barcelona side that had beaten Real by the same scoreline the previous season, this was a visual representation of the shift in the balance of power with Laudrup’s move proving the moment that made it possible.

"It's an honour to have played for two of the biggest clubs in the world." pic.twitter.com/qNtUMjV1A7

He orchestrated a win that remains etched into club folklore, assisting the third as   claimed a first-half hat-trick.

The Chilean had been the main beneficiary of Laudrup’s arrival, bouncing back from a disappointing campaign to win the Pichichi award with 28 goals – the influence of the Dane not lost on the club’s leading scorer.

“I always say that Laudrup had three eyes, not two like everyone else. As a forward, I had to be aware all the time, because he could make you a chance out of nothing and you had to be prepared for that moment.

“Michael was a magician and one of the greatest players ever.”

Laudrup spent just two seasons with Real Madrid, but his impression was such that he was voted 12th amongst the club’s greatest footballers of all-time during a 2002 vote.

He was also named as Spanish football’s best foreign player of the past 25 years at the turn of the millennium, ahead of names including Cruyff, Romario and Ronaldo Nazario amongst others.

Romario and Raul both hail Laudrup as their finest ever teammate, whilst Andres Iniesta has spoken of his belief that the Dane is the greatest talent the game has seen.

Individual accolades and statistics may paint a different picture, but in the eyes of those who bore witness to the legend of Laudrup, there have been few better.