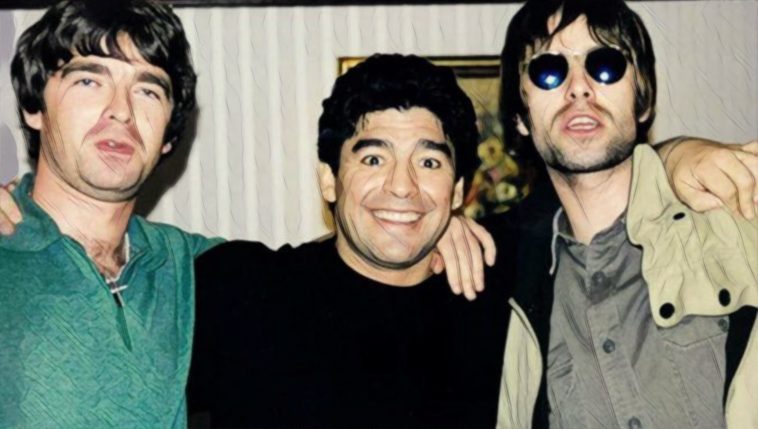 As the late, great sportswriter Hugh McIlvanney once said, “Maradona was a maker of worlds, certainly a shaper of World Cups.”

In the few days since the passing of Diego Maradona, who left this earth all to early yet lived a hundred lives while he was on it, we’ve seen and heard so many anecdotes and personal stories from people that he touched.

From football icons to political figures to the average person, it felt like the entire world had something to share about Maradona and the influence he had on their lives.

There was not a single football fan in the eighties who didn’t fall in love with El Diez. Well, except for maybe England fans. But even then only the most intransigent weren’t won over in the end.

The memories were made at World Cups, but his imprint went so much deeper. There are so many stories, so many myths and legends, too many to write in one article. But we wanted to bring some of the lesser known to you.

Maradona once threatened to kill Oasis

In 1997 Oasis were at the peak of their powers. Their third album Be Here Now was released that year and went to number one in the UK and Ireland.

Diego Maradona, on the other hand, had finally retired from football that October and was deep into a drug habit that had plagued much of his adult life.

The two parties crossed paths in Buenos Aires when the footballing icon was supposed to be under house arrest. We’ll let Noel Gallagher take it from here.

“We were in Argentina, we had done a gig and the next minute we were sat in the bar having a f*cking drink, and then about 30 people have come, legging it in. It was like the Ant Hill Mob,” the singer told Noisey in 2017.

“And we were going ‘who the f*cking hell is that?’ Sting was at the bar crying because he’d f*cking had his dressing room robbed.

“So we were going ‘Look, can we just go up and meet him?’ like that to the f*cking interpreter.”

The Gallagher brothers were allowed up to meet the Hand of God himself while the rest of Oasis waited behind. Liam says they encountered Maradona playing keepie-uppies with a bottle top, while his eyes were bulging wide “and ours weren’t far off.”

The younger sibling suggested they get a photo and scarper, but not before El Diego gave them a warning via their interpreter:

“He says ‘He’s told me to tell you that if you leave with any of his bitches, he’ll have you shot’.”

When Oasis met Maradona in 1997, Diego told them: “If you leave with any of my bitches, I’ll have you killed.” #diegomaradona pic.twitter.com/O0Ww4T6Dyu

In the lead-up to the 1986 World Cup, Argentina manager Carlos Bilardo made Maradona captain, much to the dismay of previous skipper Daniel Passarella.

The centre-back had worn the armband on the way to winning the World Cup on home soil in 1978, but he was now 33 and Maradona was the natural successor.

An argument between the two erupted one day when Maradona and several of his team-mates were 15 minutes late for a meeting. Passarella suggested that the delay might have been because he was too busy enjoying a bit of nose candy.

“Okay, I’ll admit I do drugs,” Maradona reposted. “But not this time. You’re landing others in the sh*t, kids who were with me and didn’t do anything. Have you got that, grass?”

The number ten was confronted by Jorge Valdano at a subsequent meeting, but this time Maradona responded by accusing Passarella’s of an extramarital affair with a teammate’s partner and a huge row ensued.

Curiously, Passarella fell ill soon after, withdrew from the tournament, and never played for Argentina again.

Yes, you read that correctly. And yes, it really did almost happen.

In the afterglow of Argentina’s first World Cup win in 1978, English clubs were keen to mine the South American country for talent. Tottenham Hotspur bought Ricky Villa and Ossie Ardiles, both of whom went on to become Spurs legends.

Sheffield United were another club who visited Argentina that year to scout prospective transfer targets. Manager Harry Haslam and director John Hassell liked the looks of a 17-year-old playmaker who had just missed out on the World Cup-winning squad that summer.

The second tier club agreed a deal for the youngster with Argentinos Juniors worth £150,000, a helluva lot of money for a teenager at that time. Diego Armando Maradona was going to be a Blade.

Unfortunately for the Yorkshire outfit, the military junta ruling the country at the time intervened. They demanded a bribe of a similar amount to allow the player leave Argentina. The club baulked, stepped away from the deal, and instead signed two players who few fans even remember.

Instead of pushing for promotion as hoped, United suffered relegation at the end of the 1978/79 season and went down again in 1982. Maradona moved to Barcelona that summer, before enjoying incredible success with Napoli and the national team during an incredible career.

Imagine what could have been.

Maradona once told the Pope to sell his gold ceiling

Born a Catholic, Diego Maradona said that meeting Pope John Paul II was a “disappointment”. He chastised the pontiff in his autobiography for living in such an opulent setting.

“I was in the Vatican and I saw all these golden ceilings and afterwards I heard the Pope say the Church was worried about the welfare of poor kids. Sell your ceiling then, amigo, do something! You’ve got nothing going for you, you were only a goalkeeper!”

The clip they left out of the Diego Maradona film: Maradona taking a line of cocaine immediately after scoring a goal. pic.twitter.com/m3o5trx8nm

In the early noughties Maradona spent a lot of time on the island of Cuba to get treatment for his cocaine habit. While he fathered three children with two different women, which he only accepted to be the case in 2019.

The Argentine had denied having any children other than the two daughters he had with first wife Claudia Villafane, but has since recognised Diego Junior (32) and Jana (22) after court battles with their respective mothers.

Along with his seven-year-old child, Diego Fernando, whom he had with partner Veronica Ojeda, Maradona left behind eight children in all.

Maradona has a tattoo of Fidel Castro on his leg

El Pibe de Oro’s leftist credentials are questionable, but he certainly sympathised with left-wing leaders in Latin America. He became friends with Fidel Castro during his time in Cuba, and had his face tattooed on his leg in tribute to match the one of Che Guevara on his right shoulder.

A huge admirer of men who shared his anti-establishment ideals, Maradona was also friends with the late Venezuelan leader Hugo Chavez and former president of Bolivia, Evo Morales. Just this month he received a letter from Nicolas Maduro, the current president of Venezuela, wishing him a happy birthday.

Maradona was a revolutionary and committed anti-imperialist.

He was a friend of Castro and Hugo Chávez (with tattoos of Fidel and Che), and a champion of the poor and oppressed. pic.twitter.com/TxeEQAnUlp

It’s wholly unsurprising then that Maradona was a staunch anti-imperialist and hated everything that the United States of America stood for.

“I hate everything that comes from the United States. I hate it with all my strength,” he told Chavez in 2007.

“I believe in Chavez, I am Chavista. Everything Fidel [Castro] does, everything Chavez does for me is the best.”

Maradona wore several anti-George W. Bush t-shirts during the mid-noughties when he was US President, including one that said ‘Stop Bush’ but the ‘s’ in Bush was replaced with a Swastika.

He also wore one that branded Bush a war criminal and was quoted as saying: “I’m proud as an Argentine to repudiate the presence of this human trash, George Bush.” Tell us how you really feel, Diego.

Maradona’s anti-imperialist streak likely stems from the Falklands War between Argentina and Great Britain in 1982. Argentina suffered 649 casualties during a crushing defeat that precipitated the downfall of the military government and the introduction of democracy.

As someone who always identified with the oppressed, Maradona supported the people of Palestine. “In my heart, I’m Palestinian,” he said in 2018.

Read: 30 of the most iconic football photos ever taken: Pele, Maradona, and Pickles the dog

See Also: Diego Maradona – 20 of the best quotes about the Argentina legend