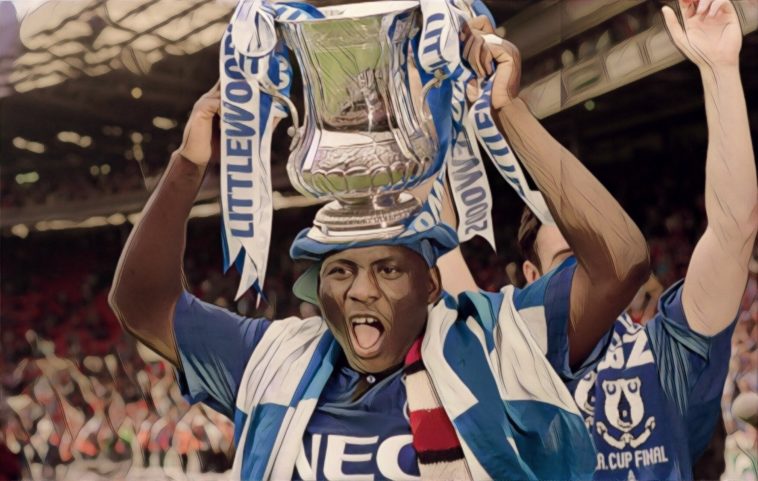 This week we inducted Everton cult hero Daniel Amokachi into our 90’s Football Hall of Fame, a player who is still remembered fondly on Merseyside to this day.

The striker made a name for himself as a member of Nigeria’s nineties golden generation, an eclectic group of players who took international football by storm throughout the decade, thrilling spectators at USA ’94 and France ’98 as well as winning a gold medal at the 1996 Summer Olympics.

Amokachi announced himself with a goal in their opening match against Bulgaria in the group stages, catching the eye with his dance moves in celebration. But it was his finish against Greece, which not only secured qualification to the knockout stages but was also a strong contender for goal of the tournament, which really put him on the map.

With the clock ticking down and the ball at his feet in the opposition half, the smart thing to do in this scenario is to just take it to the corner and run the clock down. Amokachi though “sod that” and went for broke. He takes on four defenders, evading slide tackles along the way, before wrong-footing the central defender to give him the space to thwack the ball from range past the helpless goalkeeper.

That naturally garnered attention, leading to speculation that he would make a big money move in the summer. Everton, despite struggling in the Premier League, were the ones to bite, spending a club record £3 million to bring him in from Club Brugge.

It didn’t pay off at first, as the Nigerian failed to make much of an impact in the league in his first season at Goodison Park. Duncan Ferguson was the main man up front and he was never going to be dropped. The club were also mired in a relegation battle, which inevitably led to Mike Walker’s sacking.

It’s never good when the manager who signed you is fired, and Amokachi’s fortunes didn’t exactly improve under new boss Joe Royle. In fact they worsened. Although the Liverpudlian liked the player on a personal level, he didn’t know how best to deploy him, preferring instead to play the instantly forgettable and tremendously useless Brett Angell.

If he was lucky, Amokachi would sit on the bench, but he was often left out of the squad altogether. It is remarkable, then, that he was able to pull off the most famous act in his career late on in the season.

With Everton 2-1 up against Spurs in the FA Cup semi-finals, Paul Rideout was being treated by physios, so Royle instructed Amokachi to warm up just in case he had to come on. The striker managed to convince one of the assistants that he was actually being brought on, and before the manager realised what was going on, the substitution had been made.

Royle later dubbed it “the best substitution I never made”, as Amokachi’s brace ensured the Toffees’ passage to the final at Wembley, where they defeated a much fancied Manchester United side 1-0. He became the first African to win the world’s oldest cup competition, ensuring his name would be etched into history forevermore.

That should have been the kickstart for the glorious career of a clearly talented footballer who possessed impressive physical attributes, but it didn’t work out that way. He only spent one more season in the Premier League, before heading off to Besiktas in Turkey, where he won another cup. Injuries beset the latter end of his time in the game and he was eventually forced to quit the sport at just 28-years-old without knowing if he ever truly fully utilised his potential.

Nonetheless, mention of Amokachi’s name brings a smile to the face of anyone from the blue half of Liverpool, a reminder not just of the most glorious and spectacular moment in the club’s recent past, but of a kind and generous soul who was well liked by everyone who came into contact with the man in the blue beret.

Join our 90’s football Facebook group for more content on the greatest ever era of the game!

Listen: Episode one of the 90’s Football Hall of Fame