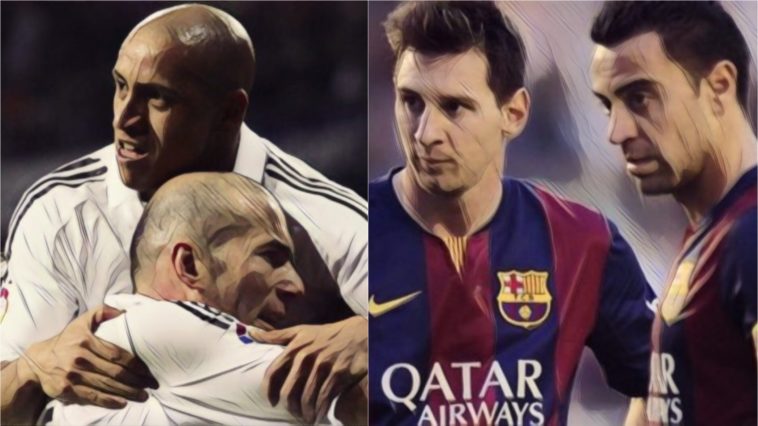 Ahead of a special Christmas Clasico between Barcelona and Real Madrid, we pick a combined XI of the two clubs’ greatest ever players.

After making his debut at the age of 18 in the Champions League against Olympiakos in 1999, Iker Casillas didn’t take long to be considered the best goalkeeper in the world, something he proved time and time again over the years.

The Spaniard won the Champions League in his maiden campaign, a dream start to his career, and would win two more with Real Madrid, as well as five league titles. On his day, which was pretty much every day, he was unstoppable and has won virtually everything there is to win in the sport. A no-brainer for number one.

Dani Alves changed the game when it came to full-backs. No one had ever managed to be a team’s star player from that position until the Brazilian rocked up at Sevilla, where he won successive Uefa Cups.

That’s why Barcelona shelled out an initial £23m – at the time a hell of a lot money for a defender – for Alves, who became one of the club’s most decorated stars by winning multiple leagues, cups and Champions Leagues.

How different things could have been, though; Sevilla agreed to sell Alves to Liverpool in 2006, but the Premier League side were unwilling to match the £8m asking price. One of the worst examples of penny pinching in football?

Perhaps not the purists’ idea of an ideal centre-back, but the curly haired defender was one of the best in Europe during his career and a club legend.

An accomplished passer of the ball, Carles Puyol was the defensive cornerstone of Barcelona for several years. A man of commendable character and the team’s leader for over a decade, he won three Champions League trophies and six league titles.

At this point you’re probably thinking, “where’s Sergio Ramos?” Well, he’s not here. Although the central defender has had a very successful career, he is not as good as Fernando Hierro was.

The former Bolton Wanderers star was a rock at the heart of the defence, but he was a versatile player who could play as a defensive midfielder. Ramos has a knack for scoring goals, with 89 in his Madrid career, but Hierro was even better at it, scoring a remarkable 130 goals for Los Blancos. He once scored 26 in a single campaign.

The 6ft2″ man from Malaga also provided tremendous leadership, something Real sorely missed when club president Florentino Perez decided to let him go in 2003, for a team that won three Champions League trophies in the nineties and early noughties.

The Marcelo fanboys won’t forgive me for this, but Roberto Carlos is by far the best left-back to have played for Real Madrid in recent memory.

Although Roy Hodgson thought the Brazilian would be better off in midfield when the two were at Inter, he was one of the first players who showed you could be an effective extra attacker from full-back. Carlos spent 11 years at the Estadio Santiago Bernabeu, where he won four La Liga titles and three Champions League trophies. He was pretty nifty at free-kicks too.

The poster boy for the Galactico era, Zinedine Zidane didn’t achieve as much success as hoped following his move to Real Madrid in 2001, but he showed enough to suggest that he might be the greatest European talent of the modern era.

Those who focus on Zizou’s goals and assists tally miss the point spectacularly; this was a man who could single-handedly change the flow of a game, create a piece of magic out of nowhere, and do incredible things on the ball. It doesn’t hurt either that he will be forever known for one of the all-time great goals, which he scored in the Champions League final.

Zidane could also, funnily enough, be the manager of this combined XI, having won three Champions League’s and a La Liga title as Madrid boss.

No player in recent times exemplified the ‘Barcelona way’ more than Xavi. The Catalan midfielder was a supreme playmaker who could seemingly make any pass on the pitch. A member of possibly the greatest club side of all-time, Xavi made up one half of a dynamite midfield partnership with Andres Iniesta.

What's better: The Assist or The Goal? 🤔

The number six had the perfect farewell in 2015 when he won his fourth Champions League winners medal with Barcelona before leaving to play in Qatar.

This inclusion means that Ronaldinho has to be left out, which will upset many but is the right decision in this writer’s opinion. Although the Brazilian was a human highlight reel and was undeniably the world’s greatest player at his peak, Johan Cruyff’s effect on Barcelona and football as a whole makes him more deserving of a place in this team.

The Dutchman was the embodiment of Barcelona’s style of play, playing under fellow Ajax man Rinus Michels in the seventies, imbuing the club with the characteristics of Total Football. Cruyff returned to the club as manager in the late eighties, creating the Dream team, inspiring Pep Guardiola to later become a manager, and winning the club’s first Champions League in 1992.

Cruyff was genuinely one of the greatest players ever as well, and deserves to be recognised in the same bracket as Diego Maradona and Lionel Messi.

Speaking of whom, what team featuring all-time great Barcelona players would be complete without Lionel Messi? Over 15 years the Argentine has proven that he’s not just the greatest player of this generation, but in the history of the sport too.

Messi’s numbers defy logic, but the most relevant to the derby between his team and Real Madrid are the number of goals he has scored when the two sides have met: 26, the most anyone has scored in El Clasico.

Another player whose numbers are off the charts, Cristiano Ronaldo arrived in Madrid from Manchester United in the summer of 2009 and for the next nine years cemented his place in the club’s folklore.

Although it took several years before he and the team reached the promised land, once they did they couldn’t stop returning, winning the Champions League four times before he joined Juventus last summer. The Portuguese has scored 18 times in Clasico matches, the tied second in the all-time list with the next man on this list.

Until a Lionel Messi arrived on the scene, Alfredo Di Stefano could claim to have been the greatest footballer to ever play in Spain, let alone for Real Madrid. Also hailing from Argentina, the forward very nearly signed for Barcelona in 1953.

La Blaugrana agreed a deal with River Plate for his transfer, but Real had also agreed a deal with Colombian outfit Millonarios. The reason for this is that Di Stefano had changed clubs without any transfer fee and the Argentine club disputed the move. Fifa fell on the side of Barça, but the Spanish FA blocked the transfer.

An independent mediator, who conveniently had links to fascist dictator Francisco Franco, was appointed to resolve the issue. Their bizarre solution was for the player to line out for one team one season and the other team the next and again for the next two seasons after that.

Barcelona, unimpressed by his first few games in Spain, sold their share to Real. It would turn out to be one of the most transformative decisions in the history of Spanish football.

At that point, the capital team were not considered one of the biggest clubs in the country, with just two league titles to their name. In the 11 years following Di Stefano’s signing, they won eight league titles, one Copa del Generalisimo, one Intercontinental Cup, and, of course, five consecutive European Cups. Fair to say it worked out pretty well for Los Blancos.

Di Stefano also held a number of goal scoring records that lay untouched until Raul and Cristiano Ronaldo came along, but he has scored the equal second-most goals in El Clasico meetings with 18 to his name. And if there’s any doubt about his legendary status, he came in fourth in a vote to decide the Footballer of the Century.

Ronaldo Nazario and Raul can feel a little hard done by not to make the starting XI, but there’s no way Alfredo Di Stefano could be excluded.