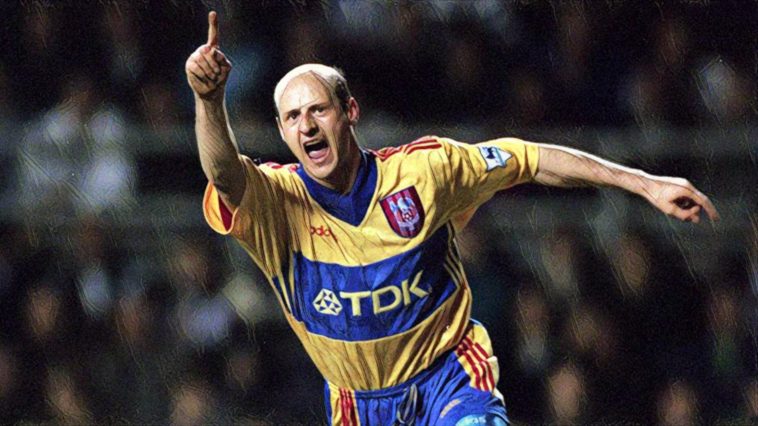 It’s been written a million times before, but the Premier League utterly transformed the landscape of English football, for better or worse.

The breakaway and subsequent television broadcast deal with Sky Sports enriched the clubs at the top of pyramid to an unprecedented level, resulting in hugely increased levels of transfer spending.

Foreign superstars were moving to the unlikeliest corners of England. Brazilians ended up in Middlesbrough, Colombians in Newcastle, Frenchman and Italians just about everywhere else.

In 1997 the TV rights deal more than doubled from £304m to £670m, illustrating the booming popularity of the league. In light of this Crystal Palace, having just been promoted from the First Division, settled on a strategy: go hard or go home.

Over the course of the 1997/98 season they spent roughly half of their £30m share of the TV money on transfers, but the most notable signing was one Attilio Lombardo, signed from Juventus for £1.6m.

It was a truly shocking transfer at the time, the kind that no one would have predicted in a million years. To put it in a more modern context, it was akin to James Rodriguez joining Everton or Xherdan Shaqiri moving to Stoke City.

As Peter Henry noted on the 90’s Football Hall of Fame podcast, “he went from putting the ball in for Gianluca Vialli to putting it in for Neil Shipperley, so it was a big culture change for him.”

Lombardo was an incredibly successful and polished footballer, featuring in seven European finals by then. He had won the Champions League with the Old Lady just a year previously, and had already attained cult hero status thanks to the important role he played in the beloved Sampdoria side of the early nineties.

Thanks to Gazzetta Football Italia, he already had a bit of a caché with English football fans. You might even recall him from his dancing cameo on the show with presenter James Richardson.

Weekend telly at its finest.pic.twitter.com/IrlholLxYb

Although he looked like someone who works in a garage, he was a classy operator on the pitch, as exhibited from the moment he stepped on the pitch for the Eagles. In the opening game of the season against Everton, he linked up with Paul Warhurst to score a lovely goal.

‘The Bald Eagle’ went on to win the penalty that Bruce Dyer converted, ensuring a 2-1 win at Goodison Park and the ideal start to life at the South London outfit. The good early form that saw Palace win two of their opening three matches did not last, however.

Their star man suffered an injury while on international duty with Italy in November, at which point they were tenth in the table. They couldn’t buy a win thereafter. In the new year, they went on a run of seven consecutive losses and a 6-2 defeat to Chelsea was the end of the line for manager Steve Coppell.

The former Manchester United stalwart described the club’s descent down the table as a “slow strangulation”. With a takeover by Mark Goldberg in the works, Coppell stood aside rather than wait to be shoved out of the way, moving upstairs into a Director of Football role.

If Coppell’s move out of the dugout wasn’t a massive surprise, then Lombardo’s move into it certainly was. At 32 years of age and no senior managerial experience to speak of, he became the youngest Premier League manager ever, a record he still holds to this day.

“It is a bold, massive step and a lot of people will look on it as foolish, but at least we are trying to be positive. It might not work but then everyone outside the club thinks we are going down anyway,” Coppell remarked at the time.

Lombardo was, understandably, “shocked” at being offered the job. “I had half an hour to make a decision and it felt like being run over by a lorry,” the Italian said in his first press conference.

The comments were provided via translator, as the playmaker’s English was still at a rudimentary level. That made his appointment quite baffling, but the decision to make Tomas Brolin his assistant was even more peculiar.

The Swedish striker, who had spent two unhappy years at Leeds United, was essentially employed to translate for him in the dressing room. It might be the oddest managerial pair in the history of English top-flight football.

Lombardo was under no illusions; Palace were in a desperate situation, and desperate times call for desperate measures. The club were trying to get Terry Venables, but in the meantime needed a short-term fix.

“I am looking forward to the challenge but my intention is not to remain as player-manager. This is a temporary measure and hopefully we will have a new manager taking over so I can go back to being a player, even if Palace are relegated.”

If the quotes that were coming out of the club seem bleak, they simply reflected the position Palace found themselves in. When Lombardo took over, they were seven points adrift at the bottom of the table and had just ten games to save their bacon.

The Italian was in charge for seven of those, longer than he perhaps anticipated or the club intended. They won just two (albeit that was a 200% increase on the previous 15 attempts), losing the other five.

A 3-0 defeat to Man United in his final game in charge confirmed relegation after a turbulent campaign in which they lumbered towards the drop. Ray Lewington took over for the final three games, earning a win over Sheffield Wednesday on the final day, but regardless they found themselves in the same position they were in when Lombardo took over: rock bottom, seven points from safety.

Not one to jump ship, Lombardo remained at the club the following season. While his pay packet probably didn’t hurt in his decision to play in the second tier, there was also a genuine love for the club there and it made him an instant hero for life with the Palace faithful.

“They have got a love of affiliation for him and that remains to this day as well. They love him,” Ste Tudor told us on the 90’s Football Hall of Fame podcast. “Any time he returns to England, he makes a point of talking to the London press about his love of Palace.

“Certainly there is a bond that has remained, which is quite rare really. For players to come from abroad and stay for such a short amount of time to build up such a good relationship with the club and fans (is unusual).”

Unfortunately, financial reality stepped in to end the fairytale and he left in January 1999. His move to Lazio was a raging success, winning the Scudetto and Coppa Italia, while adding another European trophy to his cabinet in the form of the Uefa Super Cup.

It’s the kind of footnote to a career that only emphasizes the unusual nature of his move to Crystal Palace. It doesn’t quite fit in his glittering CV, standing out like a sore thumb that has been flattened to within an inch of its existence.

Despite only playing 49 games for the club, Lombardo was voted into their Centenary XI by fans. Placed alongside the likes of Ian Wright, Nigel Martyn, and John Salako, there is no greater expression of the depth of feeling between the player and supporters.

It can only be described as pure love.

.@TheTinkerMen just can't bring himself to say it… 😂