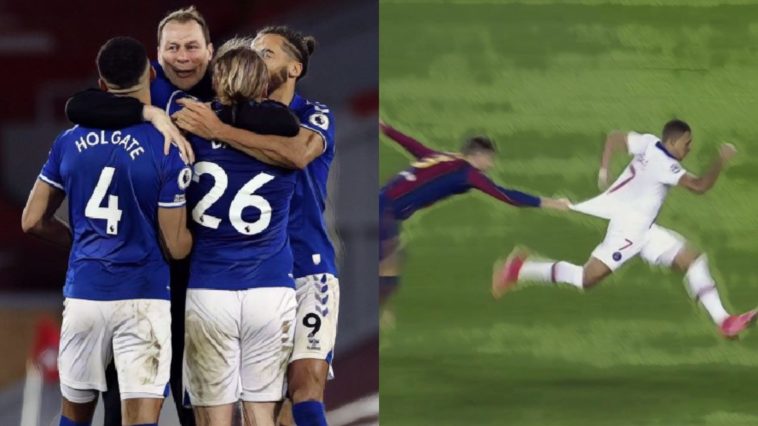 The funniest tweets from the world of football this week, featuring Everton’s win over Liverpool at Anfield in the Premier League, a mad pre-match fan hype video, Kylian Mbappé turning Gerard Pique into a meme, and the referee who literally butted heads with a player.

All I will say about this video is, she’s lucky Everton won.

We’re going to thrash the Kopites today. We are one and no one will hold us back or stop us #DerbyDay #MerseysideDerby #everton #LFC #EFC #LIVEVE #coyb #UTFT pic.twitter.com/qpmUwIaeqs

I think the Everton players may have enjoyed that one.

Tom Davies must have taken his lucky skateboard with him to the ground.

Just seen tom Davies on his way to anfield pic.twitter.com/jsDm7keSRV

If Mohammed Salah was a flight attendant:

"The exits are here, here & here. Thank you for flying with us" pic.twitter.com/ZqWJQAR3DN

At least Thiago put up some great numbers.

Despite failing to win, Thiago “to me to you” Alcantara completed the most pointed fingers on the pitch tonight (37) against Everton.

If this doesn’t illustrate what a weird season it’s been, nothing will.

It’s February and David Moyes’ West Ham side, a team with no strikers, whose best attacker is Jesse Lingard and whose best defender is Craig Dawson, have overtaken “the greatest team in PL history” Liverpool. I speak on behalf of everyone when I say ahahahahahahahahahaha

When the camera catches you at the exact wrong moment:

Half of a pundit’s job is just repeating the same three or four phrases to fill air time.

the pundit who says ‘pockets of space’ but doesn’t know what it means pic.twitter.com/av3sORQCeo

Maybe they need to get them debating the big topics of the day, like Kim and Kanye’s divorce.

"We'll start with you first Jamie, do you think Kim gave her all?" https://t.co/K0cfEoDm71 pic.twitter.com/C7cr93gO7A

The game definitely needs more referees getting shirty with players.

#itfc @SkySportsNews the ref did square up and put his head in pic.twitter.com/35mkNDnmOo

Fair play to Alan Judge for the classy response.

As I said in this 👇. There was no need for an apology. I wasn’t looking for one or looking for any action to be taken. In football as everybody knows stuff happens in the heat of the moment in a game. We all make mistakes and for me that is the end of this https://t.co/ujQsF9lQ4N

With Phil Neville and Ryan Shawcross joining Inter Miami, David Beckham’s new MLS club will be the heighth of glamour.

After 14 years shithousing for Stoke, it will be fascinating to see if Ryan Shawcross can do it on an extremely pleasant weekend night in Miami.

This one captured the moment perfectly.

Never thought I would be saying there’s too much football on.

Scientists estimate that you are never more than two hours away from a Premier League match kicking off.

did he zip up his puffer jacket with the jacket underneath???¿¿ 😭😭😭 pic.twitter.com/0Q52Z6czNB

This child probably has the right idea, to be fair to him.

Arteta’s Wengerball: The shades of Arsene in Arsenal’s recent victory over Leeds

How to beat the trolls:

I’m a horrible person actually. All you masochists out there: today’s Ramble ep is OUT https://t.co/7TxOMMn8z6 x pic.twitter.com/DTT9xtiQEe

Read: Rebooting his career in claret and blue, Jesse Lingard is making up for lost time

See Also: Please, can we not spend the next decade pitting Mbappé and Haaland against each other?