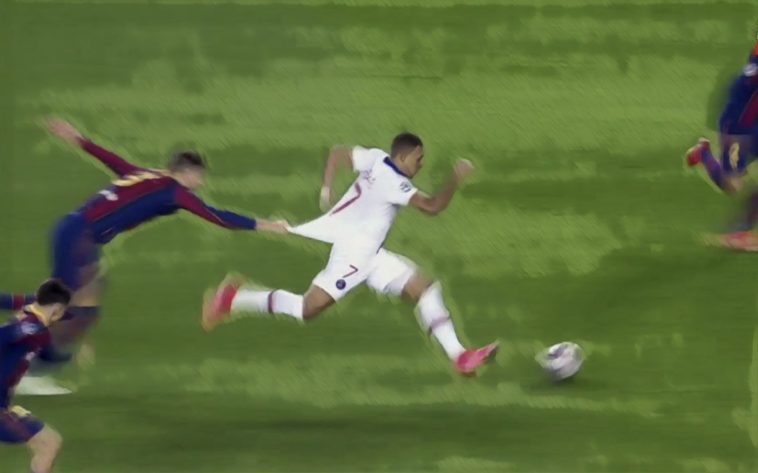 In one photo, it’s all there. Gerard Pique, legs buckling beneath him, one futile hand grasping the back of Kylian Mbappé’s shirt as the younger man powers away; an image you’ve surely seen a thousand times already and will certainly see a million times again.

Just like that famous picture of Diego Maradona standing up half the Belgian team at the 1982 World Cup, this is a case of poetic visual symbolism being more insightful than any article, than any assemblement of letters into words.

On the surface it’s all action. The slight blurring of limbs in motion, Mbappé’s legs pumping like well-oiled pistons, demonstrative of a player whose sublime technical skills are combined in a freakish alchemy with Olympian pace and strength. Offset against Pique’s notably rustier engine, this alone makes it a great sporting photograph.

The night Kylian Mbappé rocked up at Camp Nou, and went home with all the headlines 🤩

Just the third player to score a Champions League hat-trick against Barcelona 🌟 pic.twitter.com/IIVEsFGUXn

There’s even a tinge of comedy involved in the helplessness of the pursuit, like a Formula One Car being chased by a milk float, which probably explains why it’s been turned into a thousand memes.

Beneath the surface, there’s a fair amount of pathos. Pique, along with Sergio Busquets, Jordi Alba and, of course, Lionel Messi have been mainstays throughout a Barcelona dynasty that has brought seemingly endless success and joy. Whilst still great players, watching their reduced selves left in the dust undeniably felt like the true end of something. This result, alongside last year’s 8-2 drubbing at the hands of Bayern Munich, feels not unlike a once-great, fading boxer pushing it two fights too far and finding himself, for the first time, flat out on the canvas.

It has been a few years in the making. Rewind to March 2017 when Barcelona somehow overturned a 4-0 first leg defeat to PSG, winning 6-1 in the second in a comeback infamously dubbed ​La Remontada. I​n an act of financially exercised absolution PSG responded by signing Neymar, twice scorer and Man of the Match winner on the night, for a world record €222 million that summer. For good measure, they also picked up Mbappé in the very same window.

The symbolism of the Neymar transfer tells you everything you need to know about the trajectories of the two clubs. When Ronaldinho swapped Paris for Barcelona in 2003 it was a cash-player exchange that could only have gone in one direction. Football is plutocratic; anything worth having naturally flows upstream, and the best Brazilian talent about invariably ascends to Barça. That’s what Ronaldinho did. So when Neymar went in the other direction almost four years ago, it was a shock. A hierarchical shift, a heavily monied one at least, seemed to be occurring.

Not that Barcelona were penniless. They took their €222m and attempted to plug a Neymar-shaped hole with an assortment of characteristically un-Neymar-like pieces. Ousmane Dembele, Philippe Coutinho and Antoine Griezmann joined in successive summers for astronomical fees. Two of those played in the first leg, struggling to impact the game, while the other was nowhere to be seen as reports suggest that Liverpool are owed more money if their former player features in another seven matches this season. That is how financially desperate they are right now.

La Remontada w​as PSG’s most painful night and one of Barcelona’s greatest triumphs. But it also set in motion a chain of events that led us to the power reversal currently ongoing. And when you look at that photograph of Mbappé pulling clear of Pique, you can’t help but think PSG have been doing just that to Barcelona over the past four years.

It’s safe to say there will be no ​Remontada this time. Of course, before that particular script was written, nobody saw it coming. And yet, it was probably accepted that if anyone could ​Remontada, then 2017’s Barcelona, that of the Messi-Suarez-Neymar axis at the peak of it powers, could ​do it.

Is there anyone who could overturn a 4-1 first leg spanking against 2021’s PSG? The PSG of Neymar and Mbappé? Probably not. And certainly not the dishevelled 2021 version of Barcelona.

The recent past of these two clubs, the mini-saga that has played out since that fateful night, the power shift that has taken place; it’s all there in that one photograph. The past might have been Barcelona’s, but the present is very much Paris Saint-Germain’s.

And the ​future?​ Well that just belongs to Kylian Mbappé.

Read: Five of the best players to play for Barcelona and Paris Saint-Germain