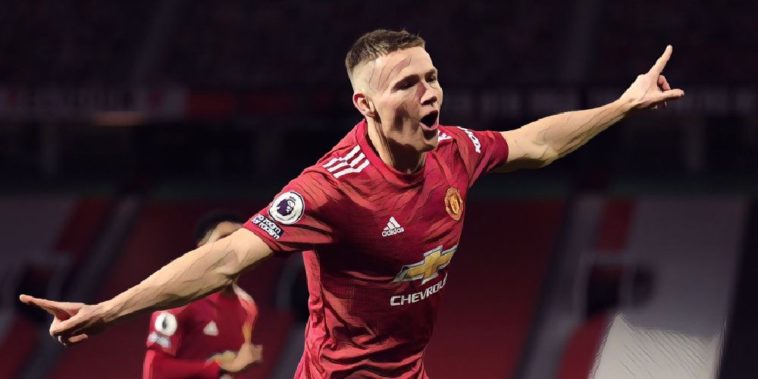 A 40-yard match-winning goal against Manchester City; a brace inside the first three minutes against Leeds; a thunderbolt against Arsenal and two big performances away against Paris Saint-Germain in the Champions League – a selection of moments in what’s been a pretty impressive last few years for the Scotland international.

At the heart of the Manchester United midfield, the man known as ‘McSauce’ by the United fanbase, has become an integral part of the steady improvement Ole Gunnar Solskjaer’s side have made in recent years, with his displays this season, in particular, really catching the eye.

Where once he looked a relatively safe and steady holding midfielder, he is now a real threat in and around the opposition box, while his ability to drive past opposition midfielders with relative ease has become a real asset to the Old Trafford outfit.

As the game against Leeds back in December showed, the 24-year-old is now showing he can be equally as effective at the top end of the pitch as he is mopping up in front of what can only be described as an inconsistent back four.

When Man Utd needed a hero…

In truth, he largely earned his place in the side due to his defensive strengths and ability to protect that shaky backline, yet this season especially has proven that he could be more than just a midfield destroyer.

The English-born midfielder already has a career high seven goals this season, including four in the Premier League, making him the joint-third highest goalscorer at the club this season – perhaps the fact he used to be a striker in the youth-team is finally paying off.

With Solskjaer’s side often far too reliant on the match-winning ability of star man Bruno Fernandes, having goals coming from elsewhere in the team is vitally important, particularly with the club lacking a consistent presence upfront.

This term has seen the youth product net crucial goals in the FA Cup against both Watford and West Ham United, while he also netted what’s becoming a trademark drilled strike in the 9-0 thrashing of Southampton earlier this month.

Although adding the sixth in a comfortable game isn’t anything particularly noteworthy, it was more his reaction after the ninth goal went in that epitomised why he’s quickly becoming a fan favourite. As Daniel James ran off to celebrate his 93rd minute goal, McTominay could be seen urging his side to get back into position so they could go again.

Despite his relative youth, the midfielder appears to be something of a leader in the United dressing room and even captained the club in the 1-0 win over the Hornets back in January. With the likes of Fernandes, Edinson Cavani, and Harry Maguire also in the squad, the Red Devils are finally beginning to form a strong spine, full of characters and leaders.

Of course, there is still a lot more work to do to really get to that next level for both McTominay and United, with the last few weeks illustrating that they still have a penchant for needlessly dropping points when it matters.

For all the talk of leaders, they did look somewhat rudderless when they found themselves atop the table last month, with no one – not even Solskjaer – having much faith that they could lift the title.

Equally, on a personal level, McTominay still has a long way to go before he can truly be recognised as a guaranteed starter in the side and someone who can take the club where they need to go in the next few years. He may be a firm fixture of the starting XI right now and rightly so, but there remain elements to his game that must be improved.

With himself and Fred often deployed in a double pivot, United can look a little short of ideas at times, particularly in games where the opposition sits back. As the recent win over Real Sociedad showed, when United are afforded the chance to counter-attack, the two midfielders come into their own, with Fred’s energy combined with McTominay’s surging runs a lethal duo.

When both are given time on the ball and the chance to create, however, they can often come up short and fail to provide the creative spark that is needed to break teams down. McTominay’s passing, in particular, can at times be erratic, as too can his midfield partner’s.

Yet while the Scotland midfielder makes up for it with his strength and improving goal return, his Brazilian teammate isn’t exactly the most impressive in attacking areas – and that’s being kind.

With the club likely to be in search of a new central midfielder in the near future – especially if Paul Pogba departs – it could be a real battle between the two men to keep their place in the side. On recent form, McTominay surely has to be the player retained.

It’s also worth remembering that it wasn’t too long ago that many were doubting his future at the club and whether he really had the quality to be a ‘United player’. After breaking into the side at the tail end of the 2016/17 season, the youngster then featured much more heavily the following season and ended the campaign as Jose Mourinho’s ‘Manager’s Player of the Year’.

The current Tottenham boss has seen something he liked in the youngster and invented the trophy on awards night as he felt it was ‘unacceptable’ for the McTominay go home empty handed. The sacking of Mourinho and arrival of Solskjaer at the end of 2018 saw his game time restricted, yet as is often the case, an injury to Nemanja Matic handed him a slot in the side and he hasn’t looked back since.

While many doubted what he really brought to the team in his early United career, his display in the remarkable win away at PSG was a real defining moment for the young midfielder. A few weeks later, McTominay produced another classy showing in the Champions League, this time against Barcelona at Old Trafford, although Solskjaer’s men were ultimately dumped out of the competition after a 5-0 aggregate defeat.

It’s not all been sunshine and roses since then, with the Lancaster native still having a tendency to frustrate in possession as well as pick up niggling injuries, just when he’s beginning to look settled. That being said, on the evidence of recent displays, he undoubtedly deserves more praise and a fair share of credit for his huge improvements of late, from sections of the United fanbase, but also from the wider footballing world.

He definitely isn’t the finished article just yet, but looking at the type of praise say Declan Rice is – deservedly – getting of late, it’s not too outlandish to suggest that McTominay has earned a bit more recognition.

He may not be the most glamorous player to have come out of the United academy in recent times, but his growing importance to his boyhood club can’t be underestimated.