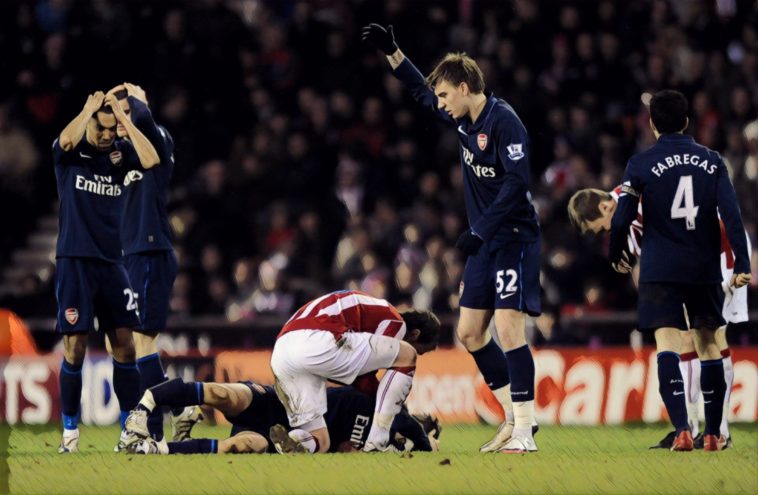 November 1st, 2008. Stoke City welcomed Arsenal to the Britannia Stadium for what appeared to be a run-of-the-mill Premier League fixture.

Despite Stoke seeing off Arsenal’s bitter rivals Tottenham two weeks prior, an away win sending the Gunners three points off the summit of the Premier League was to be expected, and was duly put in Saturday coupons up-and-down the country. What we got instead was not only a coupon buster but an unexpected and bizarre 10-year rivalry that would go down in infamy.

Stoke had been tipped to struggle that season but were quietly enjoying a decent start, sitting two points above the relegation zone prior to kick off. Their physical style of play was not winning many plaudits; it was the complete opposite of how Arsenal play the game, but they didn’t care one bit.

Stoke played to their strengths, in particular their not-so-secret weapon. Rory Delap’s colossal throw-ins, arrowed toward behemoths such as Ryan Shawcross, Seyi Olofinjana, and Mamadou Sidibe, were a force to be reckoned with.

And to be fair to Arsene Wenger, he realised that. He left star men Robin van Persie and Theo Walcott on the bench, opting for more physical players such as Alex Song, Abou Diaby, and Nicklas Bendtner. Little was he to know that this was about to become less of a football match and more of a war.

It took less than 11 minutes for the flames to be ignited. Delap’s long throw combined with Ricardo Fuller’s utter domination of Kolo Toure caused pandemonium in the Arsenal penalty area, allowing Fuller to connect with the deftest of touches, deflecting the ball past the hapless Manuel Almunia. The Stoke faithful were sent into raptures.

More of the same was to continue and Arsenal were destroyed, physically and mentally. Stoke dominated with crunching tackles and bruising aerial battles, not allowing Arsenal to play their patented, easy-on-the-eye brand of football. Stoke doubled their lead in the 73rd minute, another Delap long throw would you believe. The ball was flicked on by Shawcross and bundled home by man-mountain Olofinjana.

Arsenal were in disarray. Shortly after being substituted on, Van Persie was sent off after a tangle with goalkeeper Thomas Sorensen. Theo Walcott was stretchered off with a shoulder injury. Emmanuel Adebayor and Bacary Sagna both left the field with injuries, leaving Arsenal not just beaten, but battered and broken too. Not even Gael Clichy’s late consolation could lift the Gunners’ debilitated spirits.

After the game, Wenger was furious, labeling Stoke’s players as cowards, accusing them of deliberately injuring Arsenal’s players, claiming that their “only intention is to hurt.” Sorensen shot back, saying that Arsenal lacked courage, that they lacked “that bit of spine that you need.”

Fuel was added to the fire, but the rivalry had not yet reached its boiling point.

Dave Kitson: “Stoke manager Tony Pulis absolutely despised Arsenal boss Arsene Wenger, hated the way he played. All week I had never seen a manager so desperate to win a game of football, it was bordering on out of control.” pic.twitter.com/iNlxeUuBjZ

By May the following year, Stoke had comfortably avoided relegation from the Premier League, finishing in 12th, while Arsenal had once again failed in their pursuit of a first Premier League title since 2004. As such, neither side had anything to play for when Stoke visited the Emirates for the final game of the season. The hosts ran out comfortable 4–1 winners, and that day back in November seemed like a distant memory.

27th February 2010. Arsenal travelled to the Britannia Stadium positioned third in the Premier League table, trailing league leaders Chelsea by six points. Their London rivals lost 4–2 to Manchester City in the day’s early kick-off, opening the door for Arsenal to narrow the gap.

Just as they had the season before, Arsenal came undone from another Delap long throw, allowing Danny Pugh to head home after just eight minutes. This time though, Arsenal would not fold as easily as they did 16 months prior, equalising after half-an-hour through a Nicklas Bendtner header.

The Gunners found themselves on top, controlling the game for the first time at the Britannia, but then, it happened.

With 66 minutes on the clock and the game evenly poised at one apiece, Ryan Shawcross, Stoke City’s captain, miscontrolled the ball with a heavy touch in his own half. Aaron Ramsey looked to nip in and steal it off him before a stretching Shawcross clattered into Ramsey above the ankle. Ramsey instantly dropped to the floor, writhing in agony, for which the defender was immediately shown a straight red card.

Shawcross looked down at his stricken opponent and left the pitch in tears, realising the horrific extent of the injury; Ramsey’s leg and ankle twisted, bending at an unnatural angle. After the game, it was confirmed that he had suffered a double leg break. The Arsenal players were visibly distressed and the event bore an eerie resemblance to the horror injury suffered by Eduardo just two years prior, away at Birmingham City. That day, Arsenal capitulated, throwing away a 2–0 lead to draw 2–2.

On this day, however, Arsenal showed their mettle, with Cesc Fabregas and Thomas Vermaelen netting late goals to seal a 3–1 win, sending Arsenal into second place and three points off the top of the Premier League.

After the game, Arsene Wenger once more refused hold back: “I didn’t see many bad tackles in the game but this one was horrendous.

“To lose a player of that quality at 19 years of age when he is just starting his career is just horrendous.

“I am just shocked because that is not football for me. It is not what I like in the game.”

Arsenal, of course, did not manage to seal the Premier League title, falling away in the spring without ever truly challenging. Chelsea ended Manchester United’s period of domination to win their first title since 2006. Mid-table Stoke once again managed to secure their status in the Premier League. Mission accomplished.

In August 2010, following a dubious Stoke City goal against Spurs, in which Robert Huth seemingly fouled Spurs keeper Heurelho Gomes, Wenger couldn’t help himself. He couldn’t keep his intense dislike for Stoke City’s robust style of play to himself.

“It is more rugby on goalkeepers than football,” he said. “When you see the way Shawcross kicked Heurelho Gomes, how Robert Huth pushed Gomes in the goal, you cannot say that is football anymore.”

The Stoke fans lapped up Wenger’s comments, reveling in their role as the pantomime villains. From this day forth, every time Stoke scored against the North London outfit, their fans would taunt Wenger by chanting “1–0 to the rugby team.”

In fact, in April 2012, Stoke’s disrespect of Wenger reached a new level. During their 1–1 draw at the Britannia, the Stoke fans repeatedly mocked him, singing: “Let’s all do the Wenger,” whilst exaggeratingly throwing their arms around when Wenger would complain a decision had not gone his team’s way.

The previous season, Aaron Ramsey was roundly booed by the Stoke faithful on his return to the Britannia, but the young Welshman would not forget. In September 2013, Ramsey scored the first goal in a 3–1 Arsenal win over Stoke at the Emirates and celebrated by “shushing” the away fans. City supporters were livid, leading to leaflets being printed off so as to Arsenal and Ramsey know in no uncertain terms the reception that awaited them upon their return to the Britannia. It was a reception that they duly lived up to in the years that followed.

Stoke’s long time manager Tony Pulis left the club by mutual consent in May 2013, leading to Mark Hughes taking over. Under Hughes, Stoke would play a more possession-based style of football, moving away from the route one tactics for which they had been renowned.

Arsène Wenger had a personal bodyguard with him for all games over the last two years of his Arsenal tenure due to the heightened threat from terrorist activity to all public figures around the world. [@johncrossmirror’s ‘The Inside Story of Arsenal Under Wenger’] #afc pic.twitter.com/GZaFchWD2H

In the years that followed, no love was lost between Stoke and Arsenal. In December 2014, following a 3–2 victory for Stoke over the Gunners at the Britannia, the abuse was so bad from the home fans that Wenger complained about it after the game. Hughes’ reply was matter of fact: “Stick your fingers in your ear if you don’t want to hear it. As an experienced manager, it shouldn’t affect you too much anyway.”

The hostilities would be renewed each and every time the Potters and the Gunners met, continuing up until Stoke’s relegation from the Premier League in May 2018, which coincided with Arsene Wenger’s departure from the Gunners.

Stoke haven’t threatened a return to the Premier League since their relegation, but with the Potters sitting three points of the play-off places in the Championship this season, they may renew hostilities sooner rather than later. All we know is that the world will be watching when they finally do.

Read: Ranking the Premier League managers most under pressure from the sack