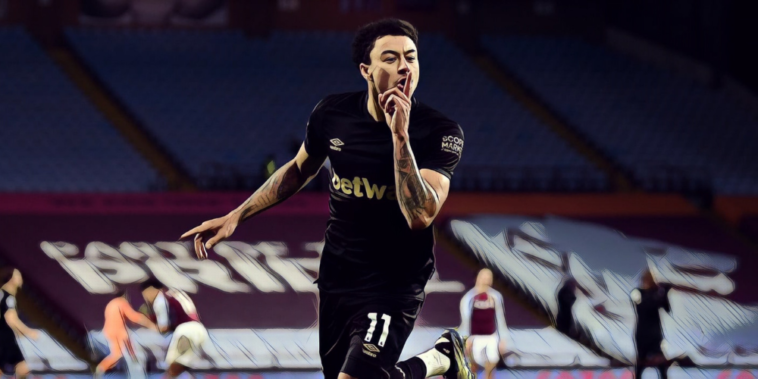 Jesse Lingard was becoming the Premier League’s forgotten man. His recent displays at West Ham United are serving up a reminder of his talents, and the point he is determined to prove in claret and blue.

Lingard hasn’t taken long to settle in at the London Stadium. Against Sheffield United on Monday evening, the England international stood head and shoulders above any other player on the pitch, playing with an energy and awareness that was unmatched.

On the left of the three, in a David Moyes side that didn’t include a centre-forward, Lingard was given a freedom to roam and regularly appeared centrally to torment Chris Wilder’s backline. Lingard’s man of the match performance briefly drove the in-form West Ham side into the top four.

The 28-year-old has seamlessly fitted into the side. He spent the evening gliding past the opposition’s pink shirts, and then providing moments of invention and power to threaten on goal. He had four shots on target, more than any other player, and won the penalty that led to the Hammers’ opening goal.

Lingard’s game was varied, willing to pass into space, run in behind, and dribble directly at the panicked Sheffield United defence. No player completed more take-ons on the night, as the Manchester United loanee grabbed the game by the scruff of the neck, and took the responsibility to make things happen.

“Jesse’s ability has always been there,” Moyes said after the game. “He is a talented footballer and we knew he could give us something different in the final third. He has done very well.”

Even the West Ham manager is likely to be surprised by just how impressive Lingard has been since arriving on Deadline Day, two weeks ago. Since scoring a brace on his debut against Aston Villa, he has looked revitalised.

Although many West Ham supporters came out of the January transfer window slightly disappointed by the club’s failure to secure the striker they were desperately searching for, Lingard’s instincts in front of goal suggest that he might be able to fill that void.

Maybe the most impressive aspect of Lingard’s game since his arrival in East London, is the relationships he quickly built up with his teammates. On Monday, he exchanged more passes with Ben Johnson and Aaron Cresswell than anyone else as he continued to operate in his favoured left half-space. On his debut against Aston Villa, it was the link-up with Pablo Fornals and Said Benrahma that caught the eye. He has quickly managed get on the same wavelength of a group of players that are enjoying a campaign of efficiency and over-performance.

Manchester United were not keen on the idea of adding an option-to-buy to the Lingard deal. His explosion of form might explain why. Ole Gunnar Solskjaer was adamant his future lay at Old Trafford when he moved down south.

“We want Jesse to come back here revitalised,” he said. “We’ve had little to no injuries and he’s not forced his way into the team, unfortunately. I just want him to go there and enjoy himself, show how good a player he is and come back. He is a Manchester United player through and through.”

Lingard slipped significantly down the pecking order at Old Trafford. The arrival of Bruno Fernandes in January 2020 basically meant that one of three attacking midfield positions was taken for good. Marcus Rashford’s form and Mason Greenwood’s rise to prominence were other contributing factors to his limited opportunities. Then, in the summer, Donny Van Beek’s signing from Ajax might have been the biggest sign yet that Lingard would struggle to get a chance in the first-team.

“I came back one of the strongest and fittest (in the squad) after the lockdown and I didn’t get my chance that I was waiting on, but the whole time I was there and not playing I was doing extra training and keeping on top of my fitness for when the time was right” Lingard explained to BT Sport.

Three years after his best season for the Red Devils, in which he managed 13 goals under Jose Mourinho, the attacking midfielder still looks like he has a lot to prove to Solskjaer.

Another manager he will be hoping to impress is Gareth Southgate. Having been a mainstay in the England side that reached the World Cup semi-finals in 2018, his lack of minutes in the Manchester United team mean that he has dropped out of the national team set-up. Southgate has keenly praised Lingard in the past, and the player was clearly a favourite of the England manager during that successful summer in Russia. With the European Championship approaching Lingard will be hoping to continue his hot streak of form and force his way into the plans, despite the stiff competition in his position from the likes of Jack Grealish and Phil Foden.

"I'm concentrating on playing regular football, and getting back to the old Jesse again."

Life at West Ham ⚒
Motivation through lockdown 💪
The future with England 🏴󠁧󠁢󠁥󠁮󠁧󠁿

Jesse Lingard caught up with @ReshminTV as he embarks on a fresh start in East London. pic.twitter.com/0h8NZOPq2L

For now, Lingard will focus on his football at the London Stadium in the hope that Three Lions recognition follows. Sitting fifth in the table, and continuing to impress with their performances, West Ham now embark on a difficult run of fixtures that include Tottenham Hotspur and Manchester City in the next two. But if the dynamic and productive displays of their new signing continue, they’ll be confident they can cause the big teams problems.

Jesse Lingard will feel like he has wasted a year of football in the backdrop of Solskjaer’s United, and he is now looking to make up for lost time.

Read: That photo of Mbappé and Pique says everything you need to know about where PSG and Barcelona are

See Also: Fantasy Premier League: How to get the most out of your chips in the coming gameweeks