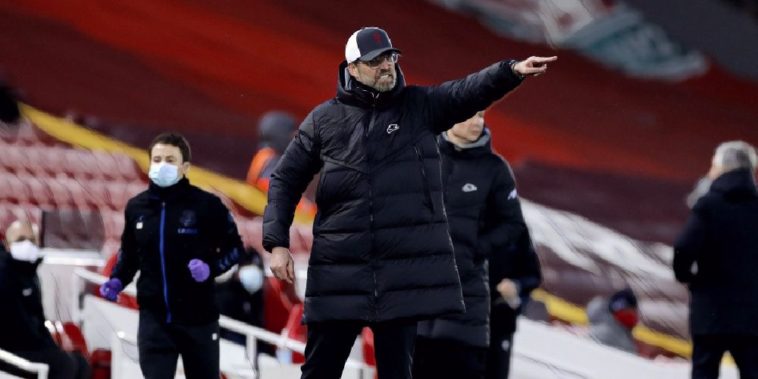 Liverpool slipped to a fourth successive defeat in the Premier League as Everton finally ended their long-standing Anfield hoodoo with a 2-0 win over the Champions.

Much has been made of Everton’s woeful record in the derby – the Blues’ last win at Anfield being all the way back in September 1999 – though they came flying out of the traps and took the lead inside three minutes.

A poor defensive header from new boy Ozan Kabak went straight to Abdoulaye Doucoure, who played it into on to James Rodriguez. The Colombian played a superbly weighted pass through the Liverpool defence into the path of Richarlison, the Brazilian firing across Alisson and into the bottom corner.

The main talking point from the reverse fixture was the injury to Virgil van Dijk, with Liverpool since suffering a succession of injuries in central defence. Reds skipper Jordan Henderson has deputised in the back four of late, though the England international limped out of the game midway through the first half.

With the wind in their faces, Liverpool laid siege to the Everton goal after the break, Sadio Mane a constant threat to the Toffees backline, while Jordan Pickford produced a big save to deny Mohamed Salah midway through the second half, the Everton ‘keeper making himself big to keep out the Premier League top scorer’s effort from close range.

For all their second-half domination, Liverpool looked to be running out of ideas, while Everton looked a threat on the counter-attack, and it was through that route that they ultimately got their second. Substitute Dominic Calvert-Lewin won the foot race to get in behind the Reds defence, his effort being saved by Alisson before the forward was somewhat harshly adjudged to have been brought down by Trent Alexander-Arnold. Gylfi Sigurdsson stepped up and despatched the resulting spot-kick beyond the Brazilian ‘keeper to secure a historic win.

Speaking afterwards, Jurgen Klopp said that his side had enough ‘moments’ to get something out of the game, but admitted his side need to make small yet decisive changes to their play.

“The first goal which we have to defend better gave the direction of the game. It was unnecessary,” the German told Sky Sports. “There were plenty of good football moments so we did well from a creative point of view but we had to chase the game and were not clam enough.

“Everton defended deep and full of passion but there were still moments where we were completely free in the box but we didn’t finish.

“In the second half we changed formation a little because we wanted to cause them more problems. Immediately we had big chances. Sadio [Mane] twice in the box and Bobby [Firmino] was twice in promising positions, so we had all these moments.

“The penalty was late and wasn’t really decisive so we don’t have to talk about that too much.

“We could talk about this for an hour in detail and you would realise what you were talking about would be 90% positive but 10% was not and we have to change 10% because it makes the difference result wise.”

“We stand here having lost 2-0. I know how important it is. We feel it deep inside. But from tomorrow on I have to use all the good stuff. These good situations are the guarantee that we can change it but the decisive moments we have to change as well.”