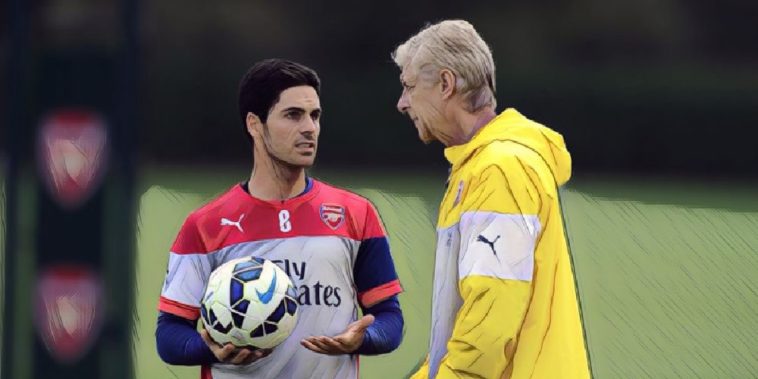 Arsenal scored four goals at the Emirates Stadium for the first time in the Premier League this season, as Mikel Arteta’s attacking football continues to take shape. In a campaign in which the Gunners have been so bereft of creativity, the starting eleven against Leeds was packed full of imagination.

Arsenal’s free-flowing and goal-scoring first half against Marco Bielsa’s Leeds United side is not something the Gunners supporters have been used to. This game was a welcome throwback to the later years of the Wenger era, where promoted sides visited and were so often taught an attacking lesson.

Mikel Arteta handed Martin Odegaard his first start, to surprisingly play alongside Emile Smith Rowe, as opposed to in place of him. Dani Ceballos replaced the injured Thomas Partey in midfield and Bukayo Saka formed the final piece of a creative quartet behind captain Pierre-Emerick Aubameyang.

The collection of skilled and technical creative midfielders with a license to interchange positions and encouraged to link-up was reminiscent of the football Arsene Wenger delivered so regularly.

In Arsenal’s barren run before Christmas, the glaring space between midfield and attack was damaging any chance of flowing attacking football. Against Leeds, the close proximity between the likes of Odegaard, Ceballos, and Smith Rowe was noticeable – the player in possession always having an option and constantly looking to progress the ball with as few touches as possible.

It is easy to compare it to the days in which the likes of Santi Cazorla, Jack Wilshere, Mesut Ozil and Tomas Rosicky regularly took to the field together.

Arsenal have only bettered their expected goals (xG) on Sunday twice in the Premier League this season. Pierre-Emerick Aubameyang was the story of the day, ending speculation over his dip in form with five shots, two chances created and a hat-trick.

But much of his success must be accredited to what was behind him, and the injection of movement, precision, and fluidity that the Arsenal captain has been starved of this season.

Smith Rowe continued his fine form in the Gunners side, despite playing in a slightly unexpected position. With in-form Nicolas Pepe dropped to the bench, the academy graduate lined up on the left-hand side and looked comfortable there.

In reality, the 20-year-old used the left as a starting position, and filled that space out of possession, but he had the freedom to come inside and get close to the likes of Odegaard and Ceballos to exchange passes and link-up.

His movement inside also massively benefited Aubameyang who could then float into the left half-space he favours, to then pick up the ball and drive into the box. This pattern brought Arsenal’s opening goal. Smith Rowe is positioned centrally and picks up the ball, shifting it to Granit Xhaka. Meanwhile, Aubameyang can find the space on the left Smith Rowe vacated, where Xhaka finds him.

There has been much debate at Arsenal over Aubameyang’s best position of late – with the need for him to be central and sniffing chances in the box but recognition of his excellent performances from the left under Arteta. Smith Rowe’s inclusion on that side of the attack could be the perfect solution, allowing the Gabon striker to operate centrally, but drift over and receive the ball wide too.

When Saka won the penalty in the first half, that was consequently overturned, it was some swift and clever interplay with Martin Odegaard that got him driving into the box towards the Leeds United goal.

On his first start, the Real Madrid loanee was quietly excellent. Providing a technical security and vision that has been desperately missed at the Emirates this season, most of Arsenal’s best moves came through the Norwegian.

His 100% pass completion in the attacking third was vital to Arsenal’s flowing moves, and the security he offered in possession mitigated Leeds United’s dangerous threat in transition. Only the electric Saka completed more take-ons than Odegaard.

Although he didn’t grab any headlines with goal involvements his performance and instant relationships with the midfielders around him is a promising sign for the new signing moving forward.

Thomas Partey’s absence from the Arsenal midfield was a concern before Sunday’s game, given the importance of the Ghanian in recent weeks. But his replacement, Dani Ceballos, caught the eye.

Starting alongside his fellow Madrid loanee, Odegaard, the two formed one of Arsenal’s highest passing combinations as Ceballos relished the opportunities to get involved with the three mavericks playing ahead of him.

The majority of the Spaniard’s appearances this season have come when Arteta was still deploying the back three, and he has had limited opportunities playing with a traditional No.10 the manager that was only introduced post-Christmas.

Already, with options ahead of him, Ceballos looked revitalised. Always eager to feel the ball and be at the centre of things, the 24-year-old buzzed around the pitch, finding pockets of space to link the midfield with the dynamic attack.

He formed the base of most of Arsenal’s good offensive moves, and his nutmeg to assist Hector Bellerin’s goal underlined confidence and assurance when playing with his blend of technical and dynamic midfield colleagues. Playing in this high-pressing Arsenal performance, he looked much more comfortable than he has when sitting deeper on the toes of a back-three.

Among all of the precise passing, clever movement, and energetic press, the sprinkle of stardust is essential. Bukayo Saka has made final product his forte of late. No Arsenal player has created more chances this season than Saka, and his four goals since Christmas are an indication of how his influence on the team continues to grow.

Against Leeds, he was a nuisance to Bielsa’s defence, who targeted him aggressively but still couldn’t prevent the two penalties he won – one of which was overturned – and his mazy run into the box in the build-up for the third goal.

With Ceballos, Odegaard, and Smith Rowe all linking up around him, Saka direct running and strong change of pace is the perfect compliment. In Wenger’s later teams, it was Alexis Sanchez that provided that final all-important piece of thrust to the attacking move. Now, it is young Bukayo Saka delivering.

When Pierre-Emerick Aubameyang made his Arsenal debut in 2018, Arsene Wenger fielded an array of naturally creative and technical players behind him. Aaron Ramsey, Alex Iwobi, Mesut Ozil, and Henrikh Mkhitaryan started the game, and Aubameyang netted twice in the 5-1 defeat of Everton.

It would be fair to say that the amount of imagination he has had to feed off has been diminishing ever since. All the players mentioned have since left the club and not been adequately replaced. Arsene left too.

But the 4-2 win against Leeds United showed signs of the old. Aubameyang isn’t a striker that likes to get too involved with the build-up, and is more comfortable with waiting to sniff out that chance to finish. That makes high-touch, ball-playing, technical midfielders even more important.

Maybe it is no coincidence that it has taken a starting eleven packed with ‘No.10’s’ for Aubameyang to rediscover form and look like something near to his normal self. Arsene Wenger will be looking on with a satisfied smile.