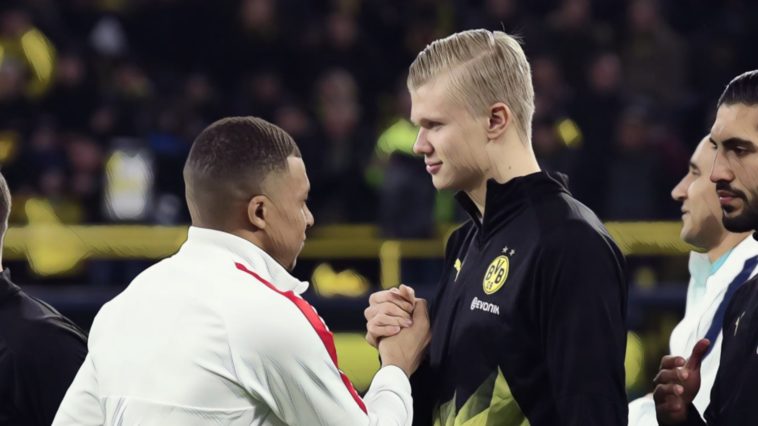 It only took a comment for the narrative to be put in motion before being cast in iron by football writers and a host of footy banter accounts.

“Tonight I want to say ‘thanks’ to (Kylian) Mbappé, because when I saw him scoring three goals yesterday… it was an extra-motivation, a boost for me.”

Those were Erling Braut Haaland’s words after he a scored a brace of magnificent goals in Borussia Dortmund’s 3-2 in over Sevilla in the last-16 of the Champions League.

It was a headline writer’s dream of a soundbite, the type that so very rarely comes out of the mouths of footballers with very little to say in the immediate aftermath of a match. That was enough to get the entire football world talking about the sport’s newest duopoly.

In fairness, it’s an irresistible story given the context of the week’s events. On Tuesday night Mbappé torched the Camp Nou with a stirring hattrick, becoming the first player to ever score more than a goal at the venue in a Champions League knockout tie.

For it to be Barcelona on the receiving end was particularly poignant, as it felt like a passing of the torch from one great to another. Lionel Messi’s time at the top looked more precarious than ever.

On Wednesday Haaland’s exploits were contrasted with the struggles of Cristiano Ronaldo at the same time over in Porto, where his Juventus side fell 2-1.

change happens slowly, then all at once

The first knockout round has been more like a playground than a serious challenge for Messi and Ronaldo over the years, but the sight of them faltering at this stage felt symbolic. Whereas it used to come so easily for them, it is now an ordeal just to make an impact on these massive nights.

After a solid 13-year duel at the top of the game, everyone is ready to move onto the next clash of titans. Haaland’s comments were the touch paper that lit the flame that many are hoping will lead to a combustible rivalry between the two.

For this is the way it always has to be: a rivalry. We cannot be satisfied unless there are two men fighting each other, whether directly or indirectly, to the bitter end so that we can satiate our unending appetite for conflict.

This is what has been happening for the last decade and a half when it comes to Messi and Ronaldo. A neverending back-and-forth battle between the denizens of football supporters who prefer one to the other. And even if you were a neutral just commenting about one or the other, then you had better brace yourself for the fanboys ready to kill for their god.

Are we really going to do this all over again? I cannot think of a more mind-numbing exercise than an endless debate over who is the “GOAT”. Do we really want to relive the tedium of that with Haaland and Mbappé?

All those wasted hours spent by anonymous Twitter accounts deliberating over whose numbers are more impressive, distorting reality in their favour until they can claim some pyrrhic victory. They’re spurred on by certain big media brands (looking at you ESPNFC, Bleacher Report, et al), who stoke the GOAT debate on social to inflate their interactions. You’d swear if they didn’t post a fawning tweet of Ronaldo every single day they might spontaneously combust.

Does it matter who scored more goals with their bad foot? Or whether it’s better succeeding with just one club or several? Does what one achieves on the international stage give them an edge? Could I care less?

If you thought Messi and Ronaldo pretending to be pals was awkward at every Ballon d'Or ceremony, just wait until Mbappé and Haaland are on every Ballon d'Or podium for a decade and this video of Mbappé mocking the other comes up every single time.pic.twitter.com/LuDblQ1EUl

Perhaps it was destined to be this way after Mbappé and company openly mocked Haaland by repeating his Buddhist pose celebration both on the pitch and in the dressing room after PSG knocked Dortmund out of last season’s Champions League.

It’s possible that when Haaland said his French counterpart’s performance gave him “extra motivation” he simply meant that seeing one of his peers dazzle on the big stage heightened his desire to emulate such a feat.

That might, of course, be wholly naïve on my part. It’s entirely likely that seeing the man who previously mocked him perform so phenomenally well put a fire in his belly. That famous night in Paris could be the thing he holds onto for the rest of his career so that he might benefit from that added impetus to vanquish his enemies.

In any case, following the trajectories of these two fine footballers will be fascinating nonetheless. Comparing them will even be enjoyable. But let’s not make this a thing where we must place a crown on one and shit on the other.

Remember those people years ago who would mundanely state we should just enjoy Messi and Ronaldo while we can still enjoy two of the all-time greatest? How about we actually do that this time instead of turning it into another battle of Twitter accounts with footballers as their display picture.

Read: That photo of Mbappé and Pique says everything you need to know about where PSG and Barcelona are