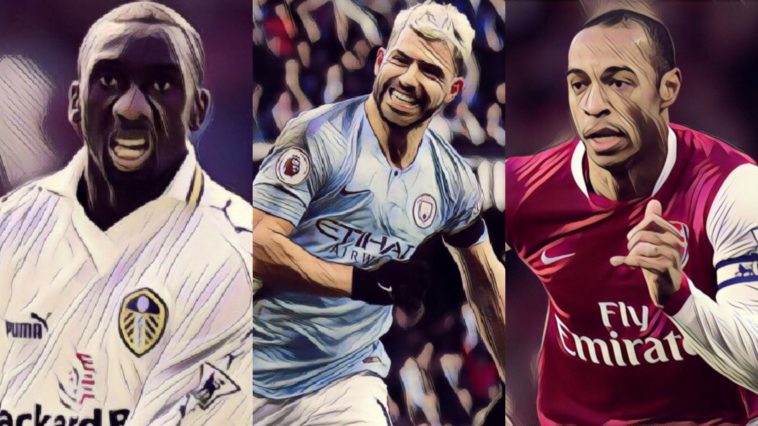 Well, he’s only gone and done it.

Following his hat-trick for Manchester City against Aston Villa on Sunday evening, Sergio Aguero has overtaken Thierry Henry as the top overseas goalscorer in the history of the Premier League.

It felt inevitable for a very long time, but it finally happened after eight and a half seasons in the English top-flight, sealing his place in the pantheon of its greatest players. The remarkable thing is that he has done so despite only arriving in Manchester at the age of 23, when he left La Liga outfit Atletico Madrid.

And with that, Sergio Aguero equals Thierry Henry's record of 175 PL goals – the most by an overseas goalscorer. 🔥 pic.twitter.com/L38hUOeF9W

A player gifted with immense talent, Nicolas Anelka burst onto the scene at Arsenal, where he won his first Premier League title in 1998, after coming through at PSG. He only spent three years with the Gunners though, before embarking on a tour of Europe that took in Real Madrid, a return to Paris, a much forgotten loan at Liverpool and Turkish outfit Fenerbahce.

The Frenchman spent a few seasons at both Man City and Bolton Wanderers, before Chelsea picked him up in January 2008. He may have missed the penalty that led to the Blues’ shootout pain in the Champions League final that year, but he did prove he could still score at the top level and won another league title in 2010.

Unfortunately, Anelka’s Premier League career ended abruptly in 2014 amid an anti-Semitic controversy while he was at West Brom.

The defining moments in Arsenal and Man United’s classic rivalry

After bursting onto the scene as a teenager with Wolves in the second tier, Robbie Keane was quickly snapped up by Coventry City in 1999, moving for a cool £6 million, making him the most teenager in the British game at the time. The Irishman didn’t take long to give a glimpse of what he would bring to the top flight for many years to come, using his guile, quick feet and killer accuracy to score a brace on his debut.

After an unsuccessful spell at Inter Milan, he moved to Leeds United for two seasons before joining Tottenham Hotspur in 2002, where he reached double digits every season for six years.

An ill-fated move to Liverpool, the club he supported as a young boy, was stymied by Rafael Benitez, who didn’t seem to even want him at the Merseyside outfit, and he was shipped back to North London after just six months. He later played at West Ham and Aston Villa on short-term loans, but played out the final days of his prolific goal scoring career in MLS, where he became one of the league’s greatest ever imports with LA Galaxy.

Although he might not be included in the conversation when it comes to discussions of the very best strikers to have graced the Premier League, Jimmy Floyd Hasselbaink was one of the most enjoyable and fun golazo merchants to watch when he was at his peak.

Two excellent seasons at Leeds United, where he scored 34 goals in 69 league games, saw him earn a transfer to Atletico Madrid, but it was a disastrous move as the club were relegated despite his impressive tally of 24 goals. Chelsea picked him up soon after and he spent four goal-laden years at Stamford Bridge, becoming a fan favourite before lining out for Middlesbrough, Charlton Athletic and Cardiff City at the latter end of his career.

🙌 Hasselbaink doing what he does best – his double sealed a fine #PL win for @LUFC against the Blues #OnThisDay 📍 Elland Road pic.twitter.com/oLdqZNyfDz

The Flying Dutchman was always the nearly man, failing to win a league title and finishing on the losing side in Uefa Cup, Copa del Rey and two FA Cup finals, although he was a two time Golden Boot winner.

The five players with the most Premier League wins ever

It’s not easy taking over from Thierry Henry as your club’s main striker, but Robin van Persie did as good a job of it as anyone could expect, finding the net 96 times for the Gunners in the league.

The Dutchman’s eight seasons at the club saw him win just a solitary FA Cup winner’s medal, but he was arguably the top flight’s best forward during that period.

Following an astonishing 30 goal season in 2011-12, RVP broke Arsenal hearts by moving to Manchester United, where he finally won a coveted Premier League title. He also happened to score one of the all-time great volleys while he was at Old Trafford.

Widely regarded as the best player to ever grace the Premier League, Thierry Henry’s record as the top scoring foreigner, which had stood for almost two decades, seemed like it would never be broken.

It took a generational talent to supplant his place at the top, but the Frenchman’s stature will never be in doubt. No one will ever take away the magical moments and memories he created with his incredible skill and unforgettable goals during his eight season with Arsenal, where he won two league titles.

🗓 #OnThisDay in 2003, The King brought up his Arsenal century

The longest unbeaten runs in the Premier League era

After a decade of incredible feats with Manchester City, the Argentine striker truly cemented his Premier League legacy by breaking two records in one day by becoming the top scoring overseas player and the player with the most hat-tricks.

Our player of the decade, Sergio Aguero is now equal on the all-time list with Frank Lampard, and he is only ten off Andrew Cole in third place. Scoring at a rate of a goal every 127 minutes, you wouldn’t bet against him overtaking the former Newcastle and Man United striker before the season is out.

Read: This season’s best young newcomers to the Premier League

Best of the 2010’s: The most iconic football matches of the decade