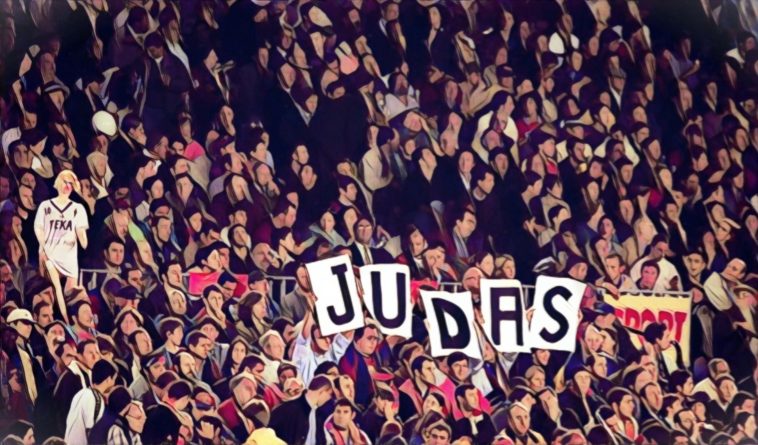 From crossing sectarian divisions to good old fashioned betrayal, these are the most controversial football transfers ever.

It’s been over thirty years since Mo Johnston shockingly joined Rangers over Celtic, becoming the first Catholic to sign for the Scottish club. It was a contentious precedent to set, one that he must have known would cause serious ructions, but an important one too.

After looking back on such a massively controversial football transfer, we sought out other ones that were equally so, and perhaps even more controversial than this one:

In the one hundred year history of the Old Firm, no one had dared to cross that Rubicon. That was until 1989, when Maurice Johnston unexpectedly joined Rangers.

The Scottish striker played for the Hoops for three years in the mid-eighties, before leaving for France to join Nantes. After two years playing for the Canaries, it was widely assumed he would return to Parkhead, making his defection to the Gers all the more stinging.

Graeme Souness, who was the manager at the time, also signed the club’s first black player, Mark Walters. “Yeah I’m proud of those signings,” he recently wrote for The Times, “but I literally didn’t give them a second thought because sectarianism or the colour of your skin was never an issue in our house. I made the decisions purely on football.”

The decision paid off handsomely; Johnston’s goals helped steer the Ibrox outfit to two consecutive league titles, after a run of just two in the entirety of the previous decade. But to this day the name Mo Johnston brings back bitter thoughts for the Celtic faithful.

No one could have possibly foreseen the ripple effects that were to come when Carlos Tevez and Javier Mascherano arrived at West Ham United in 2006.

The Argentine duo, who signed from Brazilian side Corinthians, were considered two of the brightest prospects in football. So how, exactly, did they end up with the Hammers and not a top European club?

The answer lies with Kia Joorabchian, the agent who orchestrated the deal. It later came to light that the pair were subject to third party ownership, meaning a non-footballing entity owned their economic rights, something that was and still is disallowed by the Premier League. Their transfer was one of the shadiest in English football history.

Despite being one of the preeminent young defensive midfielders of the decade, Mascherano somehow couldn’t get a regular run in the team ahead of Hayden Mullins. Tevez, though, played a key role in West Ham’s survival that season, scoring the winning goal at Old Trafford to keep them up. That was when everything went to hell in a handbasket.

Sheffield United were relegated in their stead, leading the club to take legal action. Neil Warnock left the club, moaned about it at every opportunity, and also sought personal damages from the London club. The two clubs agreed £20m in compensation, although the real cost for the Blades was likely far greater in the long run.

The two players ended up leaving for Liverpool and Manchester United respectively that summer, before Tevez was later involved in another controversial transfer by switching to Manchester City after two years. The forward famously held aloft a ‘Fergie RIP’ sign during the club’s title celebrations in 2012. Those were the days.

Hell hath no fury like a lover scorned. Or, at the very least, it’s a close second to the level of betrayal felt by Barcelona fans when Luis Figo left the club for their bitterest of rivals in 2000.

Unlike Celtic and Rangers before Mo Johnston, there had been a history of players turning out for both Barça and Real Madrid; 17 in total up until that point, in fact. But Figo was an entirely different kettle of fish.

Considered one of the greatest players in the world at the time, the Portuguese was naturally a fan favourite and in return he showed devotion for the supporters. Not in a million years did anyone think he could possibly leave.

When rumours were circulating that the left midfielder was going to do just that, he denied it. “I want to reassure fans that Luis Figo, with all the certainty in the world, will be at the Camp Nou on July 24 to start the season,” he told Catalan newspaper Sport.

Little did everyone now what was going on in the background. Figo had signed a pre-contract agreement at the time with Florentino Perez, who was bidding to become Real’s president. Polling the club’s members on which player they would most like to see at the Bernabeu, he got to work on securing their number one choice.

Perez got Figo to agree to a deal that if he won the presidency the player would join Real, but if not then the player would receive one million euros. If he did get elected, however, then Figo would be subject to a whopping €26m penalty if he refused to sign for the club.

For Figo, it seemed like a win-win, as Perez was considered a long shot up against incumbent Lorenzo Sanz. Under his stewardship, they had won two Champions Leagues, but the finances were a source of tension inside the club. He was booted out by the members, leading to Perez activating the €62m buyout clause in Figo’s contract.

All of a sudden it was a lose-lose scenario for the player, who had no choice to but to cross the divide in auspicious circumstances. By some accounts he had pleaded with Barcelona to pay the financial penalty, but president Joan Gaspart could not bear the thought of paying off their rivals.

When you look back at footage of Figo playing in all-white, you can tell that the joy has gone out of him a little bit. But Barça fans didn’t care, they only hurt. There has rarely been more intense hatred for a player from a fan base, who infamously launched a pig’s head at him during a particularly fraught Classico.

He still has not been forgiven.

Could you have imagined Alan Shearer moving from Newcastle United to Sunderland? Or countenanced Steven Gerrard leaving Liverpool for Manchester United? It is simply unthinkable, and yet the equivalent transfer occurred down in north London in 2001.

When Sol Campbell left Spurs for Arsenal 18 years ago, it caused a huge furore among the Lilywhites faithful, who still feel the sting of betrayal to this day. The centre-back had come through Spurs youth academy, played for the first-team for nine years, four of which he was captain, and had even said at one point that he would never play for the Gunners.

With no Champions League football forthcoming at White Hart Lane, however, he crossed battle lines and joined up with the enemy. The whole thing was a bit cloak and dagger, as the transfer only became public knowledge when Campbell was presented to a bewildered and shocked press core.

The defender went on to win two Premier League trophies and two FA Cups with Arsenal. But the worst bit for Spurs? He left for nothing.

Five of the best free transfers in Premier League history

So far we’ve covered sectarian divisions, shady dealings, and good old classic betrayal, but none of them compare to the unadulterated racism that made this transfer one of the most controversial of all time.

Beitar Jerusalem is a bastion of Israeli nationalism and the country’s right wing. Their home crowd can be heard chanting “here we are, we’re the most racist club in the country” or “Death to Arabs” at games.

It shouldn’t be a huge surprise, then, that there was such a vociferous reaction to the news that two Muslim Chechen players would be joining the club in 2013. The supporters reacted with a banner that read “Beitar will always remain pure”.

This was the environment Zaur Sadayev and Dzhabrail Kadiyev were stepping into when they joined Beitar six years ago. When they signed for the club, who have never signed an Arab player, they were met with verbal abuse and spat at. The backlash reached it’s dire zenith when the organisation’s offices were torched in an arson attack.

When Sadayev scored his one and only goal for the club, hundreds of hardcore fans walked out. He played seven games for the team, while Sadayev only play once, before leaving. The saga was captured brilliantly by the Guardian:

In more recent years, the club renamed itself Beitar Trump Jerusalem after the US president established an embassy in the city, and following the signing of a player called Ali Mohamed fans claimed on social media that they wanted to change his name, even though he was Christian and not actually Muslim.