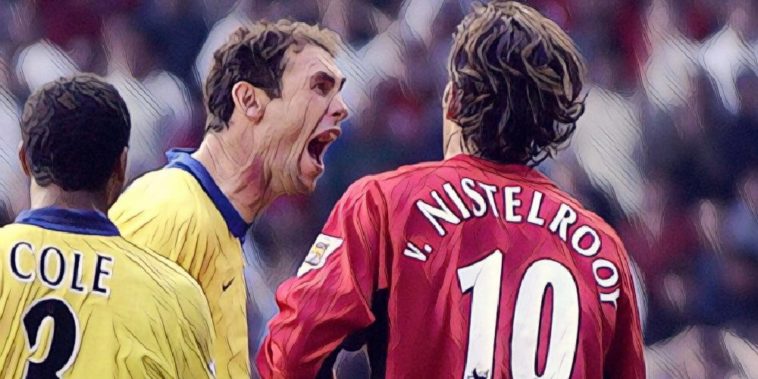 No rivalry in club football has caught the hearts and minds of the general public like Arsenal versus Manchester United from the late nineties to the mid-noughties.

For eight successive seasons, those two juggernauts largely owned the top two spots in the league table. Never before had two teams at the peak of their powers gone toe-to-toe for such an extended period.

Classic encounters, heated battles, mind games, 20-man brawls, disparaging insults, lots of drama, and even some pizza. Over the course of nearly a decade, this rivalry literally gave us everything.

Their powers have waned considerably in the years since; instead of battling for titles and cups, both clubs are struggling just to finish in the top four. This intensity of the rivalry may have dimmed, but for the two times they meet in a season it gives us the opportunity to reminisce on a golden era.

The top eight moments of Arsenal and Manchester United’s rivalry:

It’s fair to say that when Arsene Wenger arrived in the Premier League in 1996 he was eyed with suspicion by just about everyone. Who was this aloof Frenchman who had just managed Nagoya Grampus Eight in Japan? He was the man who would help revolutionise English football, that’s who.

He rubbed some people up the wrong way, though, none more so than Alex Ferguson. When Wenger arrived, the Glaswegian howled: “Intelligence! They say he’s an intelligent man, right? Speaks five languages! I’ve got a 15-year-old boy from the Ivory Coast who speaks five languages.”

When the Manchester United manager wanted to extend the season to space out the games in the run-in, Wenger rightly queried why the league should help them walk to the title. Fergie responded: “He’s coming here from Japan and telling us how to run our game!”

A personal rivalry between Ian Wright and Peter Schmeichel raised the temperature between the two teams, but the heat was only going to rise from then on.

United had a seemingly unassailable lead in the table in 1997/98, sitting 12 points ahead of the Gunners. The north London outfit reeled them in, however, completing one of the most stunning title run-ins ever.

The race culminated in Marc Overmars’ famous goal at Old Trafford, which effectively won them the league and Wenger his first title in England.

There are sliding doors moments in life, and Ryan Giggs’ spectacular goal against Arsenal in 1999 might be the biggest one in the modern era of English football.

Man United won the treble that season, but it could have been oh so different. Just moments before that goal, Arsenal were awarded a penalty to take them to the FA Cup final, but Schmeichel’s save came moments before the Welsh winger went up the other end to send the United fans into raptures.

When you consider the fact that the Gunners also held a one-point lead over United up until the penultimate weekend, when they lost to Leeds United, then the Treble could have easily been Arsenal’s second consecutive double. Assuming the Red Devils still go on to win the Champions League, it would have been a tremendous achievement nonetheless, but not the seminal moment it was.

Five of the best Manchester United vs Arsenal games

Winning the title at Old Trafford

Seeing Man United win the Treble was bad, and losing 6-1 to them at Old Trafford might have felt even worse. But Arsenal would soon enjoy the sweet, sweet taste of redemption.

In 2002 the north Londoners won their final 13 league games in unstoppable fashion, culminating in a 1-0 victory at Old Trafford, sealing the title in enemy territory.

Sylvain Wiltord scored the winning goal, with Nwankwo Kanu leaping over his head in delirium during the celebrations, creating an iconic image. It didn’t get much sweeter than that.

Arsenal knock United out of the cup

Arsenal’s 2-0 win over United in the fifth round of the FA Cup in 2003 hardly looks like a pivotal moment in this rivalry on paper, but the ramifications of this meeting certainly were.

Giggs missed an open goal, the Gunners cruised to victory, and Fergie was raging. So much so that he sent a boot flying in the direction of David Beckham, with whom he had reportedly traded the C-word with at the end of the game. The right-winger was sold that summer, moving to Real Madrid.

One of those occasions when both sides could be relatively happy, as United won the league, while Arsenal took the cup.

Keown vs Ruud – The Battle of Old Trafford

If there was one meeting between these two teams that captured the intensity and pressure of this rivalry, then it was the 0-0 draw at Old Trafford in September 2003.

The ground that day felt like a powder keg ready to blow at any second, with players on both sides frequently getting into heated exchanges. A brawl almost broke out after Patrick Vieira was handed a second yellow card for lashing out at Ruud van Nistelrooy, with Roy Keane of all people acting as peacemaker.

The match finally reached boiling point in the dying minutes though, as the hosts were awarded a penalty for, let’s be honest, a Diego Forlan dive. Ruud stepped up but smashed his effort off the crossbar, ricocheting off the woodwork with a thunderous thwack.

We all know the scenes that ensued thereafter; Martin Keown jumped all over the Dutchman, the other Arsenal players joining in to goad and push the striker around.

Although the end result felt relatively inconsequential at the time, Arsenal would not lose a single league game on their way to a third title under Wenger, becoming the first team since Preston North End in 1888/89 to go through an entire campaign undefeated.

Killing the Invincibles – The Battle of the Buffet

During this period there didn’t seem to be such a thing as a ‘normal’ football match between Man United and Arsenal. In fact, it was quite run of the mill for games to turn into a fracas.

Their meeting was in 2004 was no exception, as a full-blooded affair played out at Old Trafford. The home side were intent on bringing inflicting their aggression on the visitors, with Gary and Phil Neville taking delight in mowing down the late Jose Antonio Reyes at every available opportunity.

The 2-0 victory, which included van Nistelrooy’s redemptive penalty goal, ended the Londoners’ unbeaten run of 49 games and yet again the powder keg was set to blow. The mother of all scuffles subsequently happened out of view, in the tunnel after United had stopped the Gunners just short of their half-century.

The Battle of the Buffet, also known as Pizzagate, ensued outside the changing rooms, with soup flying and Cesc Fabregas landing a pizza on Alex Ferguson. It was one of the most bizarre conclusions to a fixture in Premier League history.

“I’ll see you out there”

The encounter at Highbury in 2005 is another game best known for an off-field clash, as Vieira was doing his level best to get under the skin of Gary Neville. The full-back went back into the dressing room to explain what had just happened but was met with a pithy response from Roy Keane, who basically told him to be a big boy and defend himself.

The Irishman then went into the tunnel and, with fire in his eyes, confronted the midfielder about it, ominously telling Vieira “I’ll see you out there”.

Arsenal actually started the match the better of the two sides, taking the lead twice through Vieira, of course, and Dennis Bergkamp. But United fought back and took a 3-2 lead thanks to a Ryan Giggs goal and a brace from Cristiano Ronaldo.

To compound matters for the hosts, John O’Shea ended up scoring a pearler late on to seal all three points. The defender somehow found himself in the centre forward position in a one-on-one with Manuel Almunia. As the goalkeeper rushed out, the Waterford native dinked a delicate chip into the far side of the net.

No player has ever looked so bewildered after scoring a goal; O’Shea looked like a schoolchild who knew he had just done something wrong and was waiting to be scolded. After the initial shock wore off, the Irishman sprinted away like a mad man in celebration.

The two teams would meet again in the FA Cup final, which Arsenal won on penalties, but this was the last great showdown in this rivalry. Chelsea, fuelled by Roman Abramovich’s millions, broke up the dichotomy and the two have never been in a direct title race since.