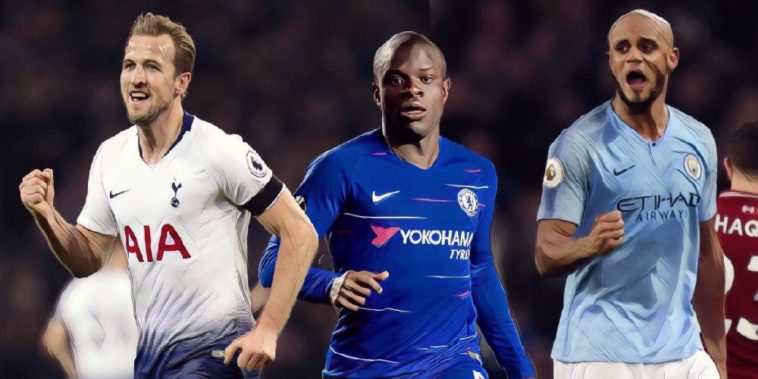 Who makes it into our starting XI of the best Premier League players from the 2010’s?

Where have the last ten years gone? It’s all been a bit of a blur. Fergie retired. So did Arsene. Liverpool nearly won the league – twice. Manchester City, of all clubs, became the dominant force. Jose returned, then imploded. Then he came back again, imploded again. Now he’s back one more time and, well, we’ll have to see how that pans out in the next decade.

In between it all we have seen some cracking football, incredible goals, and some of the world’s greatest players.

For the rest of his days, David De Gea will be cursing fax machines. If the story is to be believed, the Spanish goalkeeper was due to move to Real Madrid in the summer of 2015, but the telefax didn’t reach its destination for some reason. The move failed to materialise at the last minute.

Had it gone through, De Gea would be the proud owner of three Champions League winners medals. Instead, he’s been part of a Manchester United team that has gradually depreciated over time, falling further away from the elite of European football. Indeed, the Red Devils haven’t been this far from the top of the English game since the seventies.

And yet, despite all that, De Gea has been the safest pair of hands in the Premier League over the past decade, and has a decent claim to being the world’s best goalie of the 2010’s. Among his highlights are setting the record for most saves in a single league game, stopping Arsenal 14 times, and being the first ‘keeper to save a Leighton Baines penalty in the Premier League.

For a player that was much maligned in the early years of his career, Kyle Walker developed into one of the best right-backs the Premier League has ever seen under Mauricio Pochettino at Tottenham Hotspur.

The Englishman moved to Manchester City in 2017, where has won every domestic trophy possible. His defensive work improved immeasurably under Pochettino and Pep Guardiola, but he earned his stripes for his attacking ability down the wing, using his pace and skill to beat opponents.

Walker has shown surprising versatility at City as well, featuring in the centre of defence, in a holding midfield role, and on one occasion as a goalkeeper in the Champions League against Atalanta.

Five of the best right-backs in the Premier League era

The Dutch destroyer has only been in the Premier League five years, and has only been at Liverpool for just under two, but his impact has been so great that he pulverises the competition for this spot in the Team of the Decade.

Many doubted Virgil van Dijk’s abilities and whether he could hack it at a so-called big club, which is why he remained at Southampton for so long. But the way he transformed one of the most comical backlines into one of the most solid in the league is a sign of just how phenomenal he really is.

Five of the Premier League’s best ever centre-back partnerships

“Where do you want your statue, Vincent Kompany?” Those were the words of Sky Sports commentator Gary Neville in the moments after the Belgian defender’s rocket-propelled shot smashed into the netting of the Leicester City goal, ensuring Man City would win the game and ultimately the league title.

Vincent Kompany has won Match of the Day's prestigious Goal of the Season competition for his long range screamer against Leicester City.

It was the crowning moment of a glorious career, one which has seen the centre-back win four Premier Leagues and multiple cups. Injuries severely curtailed his playing time in the latter half of the decade, but his absences were keenly felt in the backline. It’s even more pronounced now that he is gone for good, with City struggling without his presence in the centre of defence.

Had he been more fit the last four seasons, he would certainly be in the conversation for all-time greatest defenders in English football, but he is most definitely one of the most talented to arrive on these shores.

Five of the best Premier League centre-backs ever

The Liverpudlian’s best years feel so long ago, but it shouldn’t be forgotten that Leighton Baines was the best left-back in the league over the first half of this decade and his performances didn’t start to wane until around 2016.

Not only was Baines a classy operator at full-back, but he was also excellent at set-pieces. Of the 29 penalties he’s taken in his career, he only missed three, but he could also smash in a long-range free-kick from time to time.

Baines’ performance level for Everton only started declining around 2016, when he was a few years into his thirties, and if it wasn’t for Ashley Cole he’d have at least doubled the 30 England caps he has.

An integral member of the Leicester City team that famously won the Premier League title in 2016, N’Golo Kante went and won a second successive winner’s medal the very next season with Chelsea.

Not one for putting up massive amounts of goals and assists, what the Frenchman offers in midfield is an insatiable work rate and seemingly endless amount of energy; that of two players, as it’s been said of him.

Having since gone on to win the World Cup with France and a Europa League crown with his club, Kante has long since established himself as the world’s best box-to-box midfielder.

Five of the best midfield partnerships in Premier League history

Very few Premier League footballers can claim to have been as consistent over the past ten years as David Silva, who has been one of the most enjoyable imports to watch since the breakaway in 1992.

But it would be remiss to reduce his influence down to mere consistency. Rather, Silva has been one of the most creatively sublime footballers we’ve seen in English football over the past twenty years, and he has especially thrived under Pep Guardiola in a free eight role.

While many of these slots picked themselves, right-wing was an especially difficult position to decide. The one thing I kept coming back to, though, was the fact that Mo Salah has arguably been the single best performer in the league over the last three years.

The Egyptian also had the most impressive solo campaign of the decade, scoring 32 goals in the league (and 44 in all competitions) in 2017/18, his first season with Liverpool. He hasn’t quite been hitting the same notes this season, but in total he already 82 goals and 35 assists in 125 appearances for the Reds thus far. Yeah, not bad.

Raheem Sterling, who has been in the league longer and done some spectacular things himself, and Riyad Mahrez, who had that incredible campaign with Leicester City in 2015/16, can feel hard done by, but neither have reached the heights Salah has.

There has always been an odd feeling with Eden Hazard that he possesses the potential to go up another level, that he doesn’t put in the work that could turn him into a megastar. But the number speak for themselves: in 352 appearance for Chelsea in all competitions, he has provided 110 goals and 92 assists.

And that’s before you even get to his ridiculous highlight reel of tricks and skills. Yes, Gareth Bale had an amazing few seasons with Spurs in the first half of the decade, but he isn’t at the talent level of the Belgian, and neither did he achieve anything like the same success in England.

There has not been a more lethal striker in the past decade than Sergio Kün Aguero, who has found the net 173 times in 251 league appearances for Man City.

Remarkably, the Argentine didn’t make the PFA Team of the year until 2017/18, but there can no doubting the striker’s class and precision. And, of course, he’s the person responsible for one of the most iconic Premier League moments ever.

Harry Kane, on the other hand, is a four-time PFA Team of the Year player, having established himself as the finest English striker to emerge in the last ten years.

The Spurs man struggled a lot in the early part of his career, enduring a series of loan spells and time on the bench, and didn’t show much promise that he would become a world-class forward.

But Kane became one anyway, bursting onto the scene almost out of nowhere in 2014/15, when he ended the campaign with 21 goals in 34 appearances. He has since gone on to nab 134 league goals and become the club’s third highest goalscorer ever.

The English international’s eagerness to play as often as possible, sometimes through injury, has taken a little bit of the edge off his performance level. It will be interesting to see if he can still play to the same high level in the next decade and maybe even win that coveted first winners medal with the club.

Premier League Team of the Decade: 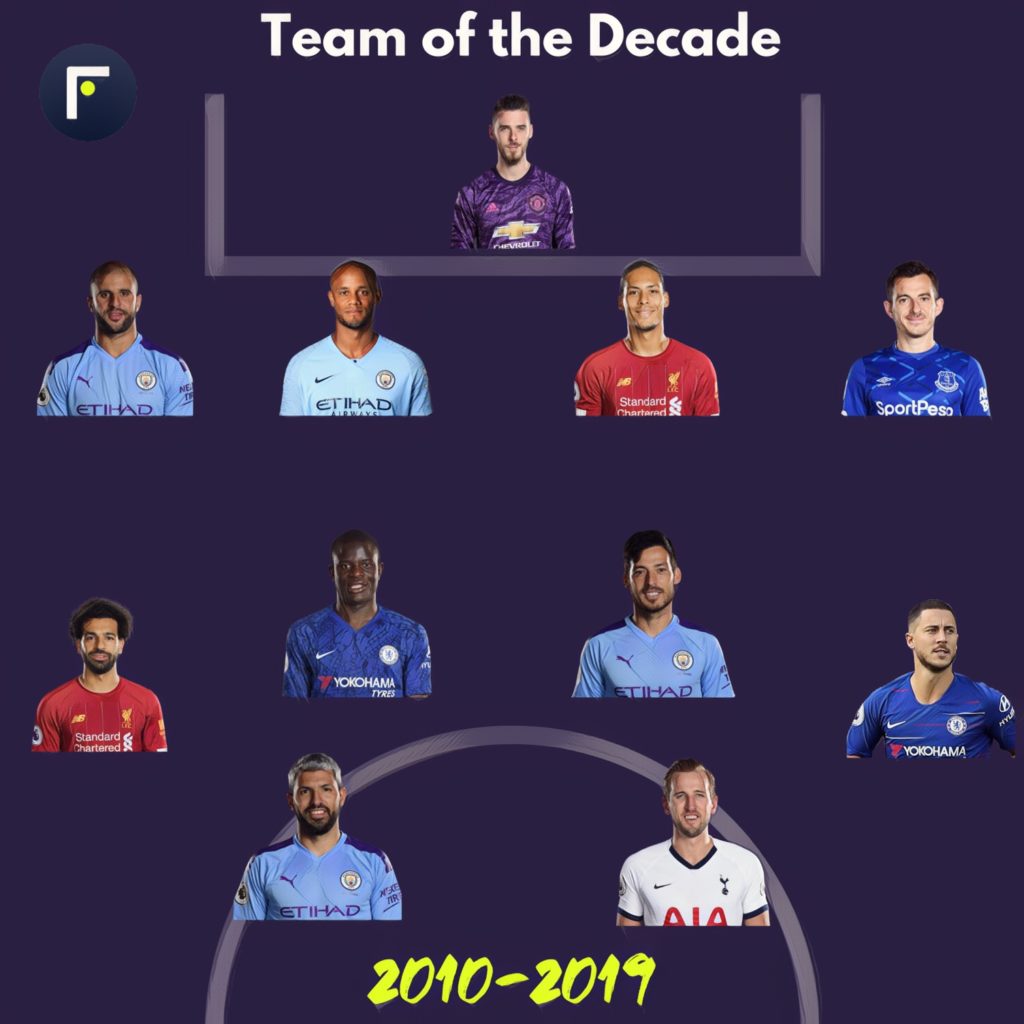