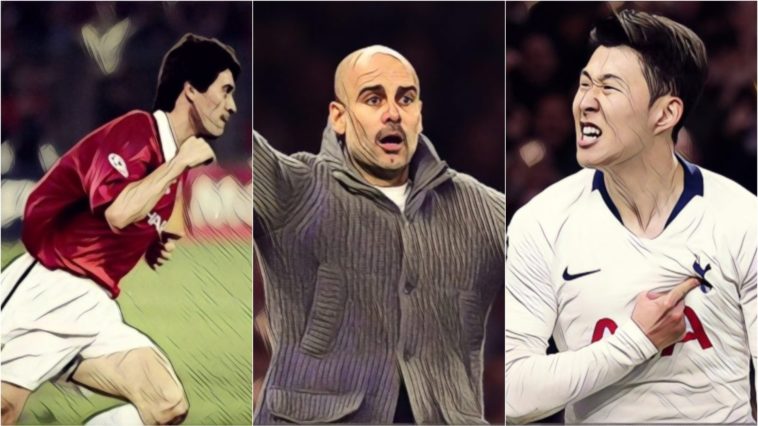 The Champions League is, without a doubt, the greatest club competition on Earth. And it’s finally back. All the goals, the best teams from the continent, the stunning comebacks, the drama, all of it is back for another season.

Four English teams are vying for European glory this season, including reigning champions Liverpool, and we’re sure to see them feature in some tasty fixtures this year. So we’ve decided to look back and find the most entertaining matches including teams from the Premier League in the competition.

Of course, Istanbul is a given — we all know that it belongs in the top echelon and, let’s be honest, it does not need going over for the millionth time. Excluding it also just makes my life a little bit easier, because there are a lot of games to choose from. So here goes.

This match has become a huge part of the lore of Manchester United’s treble-winning campaign in 1999, as Alex Ferguson’s men completed one of the competition’s greatest comebacks in the semi-final.

The first leg at Old Trafford finished 1-1, and Juventus pressed home their advantage in the return fixture with two goals from Filippo “born offside” Inzaghi in the opening 11 minutes at the Stadio delle Alpi. It would take a minor miracle to progress; the hosts, after all, had competed in the the last three finals and were a formidable side defensively.

But United struck back swiftly and held the lead on away goals by the 34th minute through goals from Dwight Yorke and Roy Keane. The Irishman’s performance that night has become the stuff of legend, putting in the shift of a lifetime despite knowing he would miss the final through suspension thanks to a needless yellow card he received on the night.

Andy Cole topped off the night by scoring United’s third with seven minutes remaining, making the Red Devils the first English team in 14 years to reach the European Cup final, and 31 years since they last played in one.

With Deco, Ronaldinho, Samuel Eto’o and Frank Lampard all on the field at the same time, this meeting was always going to feature a lot of long-range shots, and boy was there.

Ronaldinho added to his bottomless highlight reel with one of his most iconic goals, making a fool of the Chelsea defence in the process.

The Blues came out on top though thanks to goals from Eidur Gudjohnsen, Damien Duff, Lampard and John Terry. The 4-2 win saw Chelsea lay down a marker as one of Europe’s top teams.

One of those tit-for-tat battles that could have ended in any scoreline and which no one wanted to end. Having lost the first leg 3-1 at Anfield, Liverpool needed to fly out of the traps in the return leg and that they did.

Fabio Aurelio (remember him?) opened the scoring with a cheeky but clever free kick in the 19th minute, before a Xabi Alonso penalty made it 2-0 just before the half-hour mark. All of a sudden the Reds were the ones in the driving seat, but not for long.

Six minutes after the interval Didier Drogba pulled one back thanks to a Pepe Reina howler, and another six minutes later Brazilian defender Alex got the equaliser with a rocket of a free-kick. There was finally some respite for 19 minutes, before all hell broke loose.

Frank Lampard scored in the 76th minute, seemingly sealing the deal, only for Lucas Leiva and Dirk Kuyt to score twice in quick succession. One more goal would see them through to the semi-final, but Lampard scored a deliciously satisfying goal that bonked off both posts before settling in the net. One of the most entertaining contests in the competition’s history, it eventually finished 4-4.

Five of the best goals in off the woodwork

In terms of absolutely mental two-legged ties, this round of 16 tie probably takes the biscuit, with Manchester City and Monaco scoring twelve goals between them.

The first leg, which ended 5-3 to Pep Guardiola’s side, is where Kylian Mbappé truly announced himself on the world stage, scoring a wonderful first-half goal. But it was former Chelsea and United striker Radamel Falcao who stole the show with his delightful chip over goalkeeper Willy Caballero.

An 11 minute blitz from City, however, with goals from Sergio Aguero, John Stones and Leroy Sané, wrestled back control of the game to win on the night.

And yet despite the two goal advantage, there was a nagging feeling that City wouldn’t be able to hold out in the French principality. Their young starlet looked phenomenal, unstoppable even, while the forward as a whole had badly exposed the weakness in the host’s defence.

The Ligue 1 outfit won the second leg 3-1 with an ease and nonchalance that embarrassed City’s uber-expensive squad. They were impressed enough to buy both Bernardo Silva and Benjamin Mendy that summer, winning consecutive Premier League titles since.

At this stage City fans are probably sick of being involved in classic Champions League matches of which they’re on the losing side.

After a rather tame first leg in which Guardiola had gone with a conservative line-up and came out losing 1-0 to Tottenham Hotspur, they came straight out of the traps with Raheem Sterling scoring after four minutes. Unfortunately for them, Heung-min Son was on fire and the visitors were leading by the 10th minute.

It only got more bonkers from that point, as Bernardo Silva scored an equaliser within 60 seconds, before Sterling struck again to see City re-take the lead in the 21st minute. This was inarguably the wildest ever start to a Champions League game, and possibly in the history of football.

Aguero scored on the hour mark and it looked like that would be the decisive goal. But with half an hour to go, anything could happen. No one expected what did happen though.

With Harry Kane out injured, Fernando Llorente came on to act as a focal point for Spurs’ attacks. In the 73rd minute it worked, as the Spaniard scored with some combination of his hand and hip. Under the current handball rules it would be disallowed, but at the time it was a different story; after the referee checked the replay on his VAR screen he ruled there was no infraction.

The Lilywhites held on for dear life until the very end, but a misplaced backwards pass from Christian Eriksen (we still don’t know what he was doing) put Aguero through on goal, his pass setting up Sterling for one of the most glorious of finishes to a game ever seen.

And then VAR happened.

The video review showed that Eriksen’s pass touched off a City player on its way to Aguero, who was marginally offside. We’re talking a matter of inches. The scenes of ecstasy and joy that had followed the ‘winning’ goal were replaced by heartbreak and tears. Guardiola, who had just sprinted down the touchline like a man possessed, slumped to his knees. City were out.