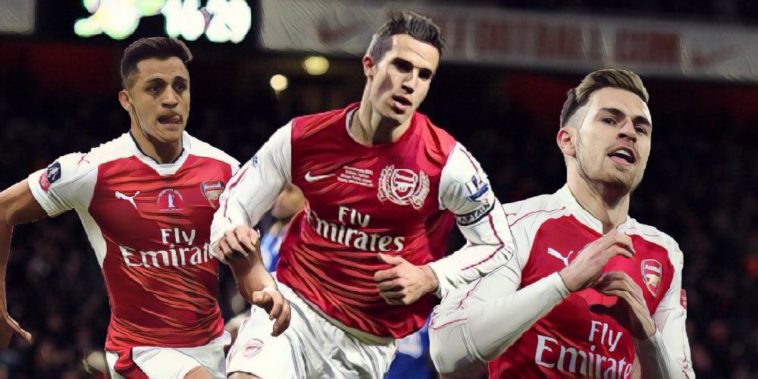 The past decade may have failed to deliver a Premier League title for Arsenal, though the North London side ended a trophy-drought with a hat-trick of FA Cup successes and maintained their status as Champions League regulars for much of the past ten seasons.

Arsene Wenger’s dynasty would come to an end, and as the club prepare to embark on yet another new era following the sacking of Unai Emery, we’ve decided to look back at some of their finer talents from recent seasons.

Here is the Football Faithful’s Arsenal Team of the Decade…

The veteran goalkeeper edges out Wojciech Szczesny for a place in our Arsenal Team of the Decade, joining the club from London rivals Chelsea in 2015 and spending four seasons at the Emirates.

In that time Cech would win the Premier League’s Golden Glove in his debut season, whilst winning the FA Cup the following year under Arsene Wenger.

Cech would make over 100 appearances for the club, before announcing his retirement at the end of last season.

Another close call at right-back, but we’ve opted to select Hector Bellerin ahead of previous incumbent of the role Bacary Sagna.

Bellerin would arrive at the club from the Barcelona academy and would make his debut in 2013, quickly establishing himself as a player with huge potential.

The Spaniard’s electric pace and delivery from out wide have made him a key part of Arsenal’s attacking play, Bellerin twice winning the FA Cup and being named in the PFA Team of the Season in 2015/16.

Injuries have hampered his progress recently, though he will be bidding to re-establish himself as a first-team fixture in the coming months and remains a favourite amongst the Arsenal fans.

Koscielny’s summer departure may have left a bad taste, though there can be no denying the Frenchman’s level of consistency in almost a decade spent in the Premier League.

Signed from French side Lorient in 2010, Koscielny would establish himself as a consistent performer, a rarity amongst Arsenal centre-backs over the past decade.

An ever present at the heart of the defence, Koscielny would make over 350 appearances and help the club to a treble of FA Cup successes, being named captain for his final season before joining Bordeaux in 2019.

The towering German would sign for Arsenal a year later than Koscielny following the Gunners’ infamous 8-2 defeat at Manchester United, quickly striking up an understanding with the Frenchman after being paired together in central defence.

Mertesacker would make over 200 appearances for the club and score 10 goals, proving a commanding presence in the club’s backline for seven seasons.

Named as club captain by Arsene Wenger, he would win three FA Cups and two Community Shields before retiring and taking up a position within the club’s academy last year.

A deadline day signing in the 2013 January transfer window, the Spaniard would prove a reliable and committed performer during his six-and-a-half year stay at the Emirates.

Monreal’s versatility would see him utilised both at left-back and centrally, becoming a favourite amongst the club’s fanbase for his dedication to the cause before returning to La Liga with Real Sociedad last summer.

The decision to allow Aaron Ramsey to leave the club on a free transfer during the past summer is one that has left Arsenal fans frustrated, given the service the Welsh international gave the Gunners in over a decade at the Emirates.

Twice named as the club’s Player of the Season, Ramsey would make over 350 appearances before opting for a new challenge with Italian champions Juventus this past summer.

The diminutive Spaniard would prove incredibly popular after arriving at Arsenal from Malaga in 2012, winning the club’s Player of the Year award in his debut season after scoring 12 goals and providing 13 assists, establishing himself as one of the best creative talents in the division.

Equally adept on either foot, Cazorla would prove to be a magician in tight spaces and would play an influential role in the club’s drought-breaking FA Cup success in 2014, scoring in the final against Hull.

He would make 180 appearances during a six-year stay in North London, a career-threatening ankle injury hampering his final seasons, though the club’s fans will be pleased to see his recent renaissance aged 34 with Villarreal.

The signing that was supposed to catapult Arsenal back into the big time following some lean seasons, Mesut Ozil’s arrival as the club’s record signing has not quite proved as transformative as once hoped.

That said, the German has sparkled on occasion, not least the 2015/16 season when he recorded the second most assists ever in a single Premier League season.

Named as the club’s Player of the Year during that campaign, Ozil has also helped the Gunners to three FA Cup successes in addition to making over 200 appearances in all competitions.

Unlocking his best on a consistent basis has been both his and Arsenal’s problem.

An instant hit following a big-money move from Barcelona, Sanchez would star for Arsenal for three-and-a-half seasons in which his blend of attacking dynamism and relentless work-rate made him a huge fan’s favourite.

Sanchez would score 80 goals in just 166 appearances for the club, being named in the PFA Team of the Year and twice as Arsenal’s Player of the Season.

The Chilean would help Arsene Wenger’s side to two FA Cups, scoring in both finals, before an ill-fated move to Manchester United in January 2018.

A rare bright spark in some otherwise disappointing seasons of late, Aubameyang would become the club’s the record-signing in January 2018 and has proven value for money despite his hefty price-tag.

The Gabon international has scored prolifically ever since his arrival in English football, scoring 54 goals in just 84 appearances and winning a share of the Premier League’s Golden Boot alongside Liverpool duo Sadio Mane and Mohamed Salah last season.

A popular figure within the dressing room, Aubameyang was named as club captain earlier this season.

The club’s former skipper would spend just three seasons of the decade as an Arsenal player before leaving in controversial circumstances, with the striker joining arch-rivals Man United.

However, that should not detract from the fact that the Dutchman is arguably the finest player to have worn an Arsenal shirt in the past ten seasons.

In that time ‘RVP’ would hit 69 goals in just 101 appearances in all competitions, his final season being a breathtaking individual campaign that saw him win the Premier League’s Golden Boot in addition to scooping a PFA Player’s Player of the Year and Football Writer’s double.

His switch to Old Trafford may have angered the Arsenal support, but he deserves inclusion in the club’s finest side of the past decade.