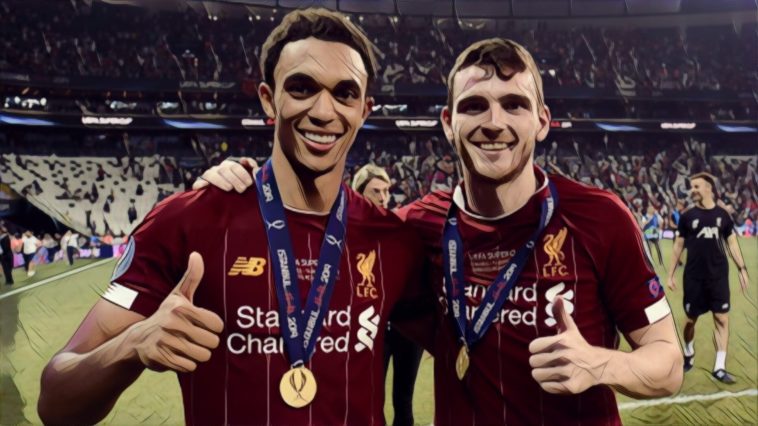 Where do Liverpool’s two stars fall into the conversation about the Premier League’s greatest ever full-back pairings?

Jamie Carragher once had a brutal dig at his Sky Sports colleague by saying “No one grows up wanting to be a Gary Neville”, by which he meant the Englishman played in an unglamourous position. When those two were at their pomp, the full-back performed a functional role in the side, but they were rarely, if ever, the star player.

That has begun to change within the last decade. It started with Pep Guardiola, of course, who recognised that Philipp Lahm was too good of a ball progressor not to play him in midfield, and he did something similar with Joshua Kimmich at Bayern Munich. At Manchester City the Catalan has played Kyle Walker at the base of midfield on occasion, while he’s also slotted midfielders like Fabian Delph and Oleksandr Zinchenko in at full-back when necessary.

From there the position has evolved; we’ve seen the return of wing-backs in many teams as the tendency to start more pacey footballers, who can get up and down the pitch with ease, on either side of the defence has grown. In the past year or so Jurgen Klopp has taken it to another level.

It might be going a bit far to say that Trent Alexander-Arnold and Andy Robertson are reinventing the game when it comes to full-backs, but the two Liverpool defenders are currently doing things as a pair that we haven’t really seen before. Between them they have provided 30 assists since the start of last season, an astonishing number for two ‘defensive’ players.

It’s become clear that Klopp wants his side to move the ball up the field through the full-backs, rather than the more common method of doing it through midfield. Robertson is more like a traditional winger at times, who can progress the ball by dribbling, while Alexander-Arnold is more of a ball player with exceptional passing and delivery.

The latter’s skill set is arguably more suited for a midfield role, so why has he been stuck at right-back? One explanation might be that the 21-year-old has more time and space on the ball there than he would have up against a midfield press. There’s also the fact that he one of the best crossers of the ball in the game today, and a wide role allows him to do that – he has hit 134 crosses in the league to date, far and away the most of any other player.

If the pair were to keep up these insane numbers, they will easily be considered one of the all-time full-back pairings in the sport. As it is, they need a bit more longevity to be in that conversation, but they’re not too far off this lot.

Five of the Premier League’s best ever full-back pairings:

Incredibly, Winterburn only got two international caps in his career. Stuart Pearce was the regular starter in his position, but by the time ‘Psycho’ left the England scene, Graeme Le Saux had come along.

And yet, alongside Lee Dixon, he won a glut of trophies with Arsenal: three league titles, two FA Cups, the League Cup, and the European Cup Winners’ Cup. Could you imagine someone with that level of success not breaking into the national team these days?

The two men were part of one of the meanest defences in English football history, lining up either side of centre-backs Steve Bould, Tony Adams and, later on, Martin Keown.

Read: The moments that defined Arsenal and Man United’s rivalry

You would be hard pushed to find a more decorated full-back pairing than these two; over eight years they won five Premier League titles, two FA Cups, the Intercontinental Cup and the Champions League.

Denis Irwin represented everything great about the old style of full-back; dependable, incredibly consistent, very solid defensively, and possessed a wicked delivery of the ball from open play and on set pieces, scoring an impressive 34 goals in his club career. Although his peak was around two decades ago, he has an extremely strong argument for being the best left-back of the Premier League era.

Gary Neville didn’t exactly represent the shift to more pacy full-backs that was come in later years, but he was more athletic than his counterpart and willing to get into attacking positions to set up goals; he provided 47 assists for Manchester United in his 19 year career.

Read: Five of the best right-backs in Premier League history

Blood is thicker than water, so maybe that’s why Gary Kelly struck up such a good full-back partnership with his nephew, Ian Harte. The two not only played with each other for Leeds United for much of the nineties and noughties, but for the Republic of Ireland too.

Both hailing from Drogheda in County Louth, Harte was a set-piece specialist with his left peg, while Kelly was a great attacking right-back, having originally played as a striker until Howard Wilkinson converted him into a wide player when he joined the Yorkshire club in 1991.

Both men saw the best and worst days of that Leeds era, playing a huge part in their Champions League and Uefa Cup runs, before it all ended in financial disaster and, inevitably, relegation in 2004. Harte left for Spanish outfit Levante, while Kelly stayed for another three seasons, becoming a one club legend.

Read: Five of the best League of Ireland exports to the Premier League

Looking back, the ploy of starting two attacking full-backs rather than just one in English football could probably be traced back to the pairing of Ashley Cole and Branislav Ivanovic at Chelsea.

Although the Serb looked like your typical brutish central defender (and he was adept in that position too), he was very proficient at getting into dangerous positions in the opposition half of the pitch, scoring 34 goals in all competitions for the Blues. Cole’s ability to zip up and down the line has been well documented, but he was also excellent defensively in one-on-one scenarios.

Together they won the Premier League title, three FA Cups, and the Champions League.

Read: Five of the best left-backs in Premier League history

The remarkable thing about this full-back partnership is the fact that these two players were written off as hopeless at an early stage in their careers. Even though Kyle Walker did win the PFA Young Player of the Year award in 2012, he was still maligned as a poor defender.

And then the full-back whisperer came along, Mauricio Pochettino. The Argentine tactician was able to both utilise their attacking potential going forward, while also turning them into competent defenders going the other way.

Tottenham Hotspur were close to winning the Premier League title in 2016/17, finishing runners-up to Chelsea, and both Rose and Walker were voted into the PFA Team of the Year. The next year the latter was off to Man City, where he has won multiple trophies, and we were robbed of seeing this tandem in full flight on a weekly basis.

See Also: The LOI Premier Division Team of the Year for 2019