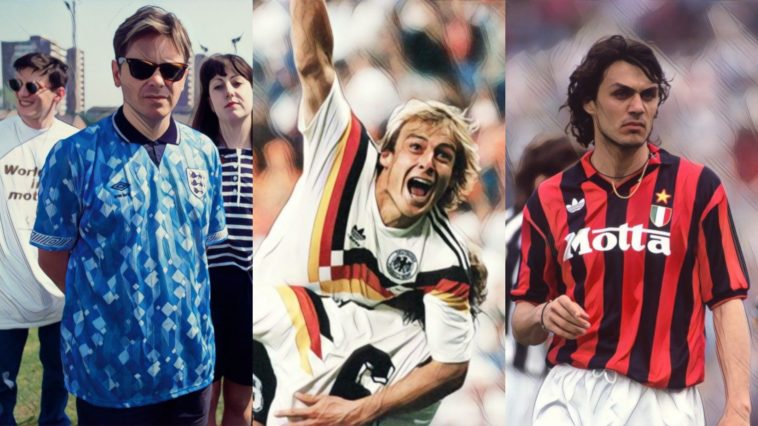 The nineties were a golden age for football jerseys, as kit manufacturers pushed the boundaries in design and creativity. Here are the most iconic of that delightful decade of the game.

There were many imitators and cut-and-paste jobs of this Adidas classic during the early nineties, but none surpassed the West Germany effort, which so effortlessly integrated the national flag into the design.

That World Cup-winning team also possessed the greatest home and away combo of all-time thanks to the brilliant green top in which they knocked England out at the semi-final stage.

Another Adidas work of art, the Bruised Banana is one of the most memorable jerseys in English football history. When the German manufacturer finally returned to the Gunners last year, they could not pass up the opportunity to pay tribute.

Ian Wright scored on his debut against Leicester City wearing this Acid House number in 1991 and it’s been a cult classic ever since. The sight of David Rocastle and Michael Thomas ransacking defences in this chevron-style shirt is enough to set Arsenal hearts a flutter.

Five of the greatest Arsenal home kits of all time

Unknown Thierry Henry walked on to the biggest stage of all and was France’s top scorer in World Cup 98, he then strolled onto Euro 2000, scoring the equaliser in the semi final, winning man of the match three times including the final, France’s top scorer again. pic.twitter.com/tA6uuB0ycK

A throwback to when France won the European Championship on home soil in 1984, it was only fitting that Les Bleus should win the World Cup in Paris wearing this splendid shirt.

An uncomplicated design with a nice collar and perfect shade of green, the little overlaying boomerangs really make this one pop. Ireland wore this one all the way to the quarter-finals of the World Cup in 1990, making it an iconic piece of clothing in the country’s history.

Yes, the home kit from that World Cup is a timeless classic. And yes, the red away one is pretty special too. But neither are quite as good as the blue third kit with overlaid diamonds from the same tournament. And it was made all the more iconic by New Order’s Barney Sumner, who so coolly wore it in the World In Motion music video.

Paolo Maldini for AC Milan against Udinese back in 1993. That kit though. 👀🤩

The greatest defender of all time? 👇 pic.twitter.com/MDZfJ0eXeD

Sometimes simplicity really is beauty. Nothing overly complicated by the stripes and details of AC Milan’s 1993/94 top, accentuated by the clean, plain features; the tricolore crest, the trefoil Adidas logo, and the near perfect shirt sponsor. And Paolo Maldini with his wavy hair and dangling chain makes it look like high fashion.

Another no nonsense effort from the Adidas crew, Newcastle United’s stylish play in the mid-90’s was matched by their clobber. The likes of David Ginola, Tino Asprilla and Alan Shearer looked immaculate as they banged the goals past helpless defences during their two title challenges under Mighty Mouse himself, Kevin Keegan.

And buttons! Who even does buttons like these for a football top anymore? But we wouldn’t say no to seeing more tops like this one.

Purple, white and red shouldn’t work as a colour combination, and yet Fiorentina made it work in the late nineties. FILA worked a minor miracle there, topped off with the Nintendo logo as the main sponsor, although Gabriel Batistuta and Rui Costa sporting it didn’t hurt its legacy one bit.

Croatia’s first appearance at a World Cup saw them sport this wavey effort by Lotto, in which Davor Suker and company created some incredible memories on their way to the last four. At every tournament in which they compete they always have one of the more unique kits, and this one is probably the most unique of the ones they’ve worn.

David Platt and Roberto Mancini playing for Sampdoria in 1993. pic.twitter.com/JvCADECxqI

Just an utterly delicious and impeccable jersey, this might be the best Sampdoria top of all-time, which is really saying something. As worn by the likes of David Platt, Roberto Mancini and Ruud Gullit during a golden period for the Italian club.

The best number 10’s in Serie A during the nineties

While Mexico’s home kit at the 1998 World Cup is fondly remembered, this jersey is quite frankly criminally underrated, not getting nearly as much credit as it deserves. Featuring the Aztec calendar, the design symbolizes Mexican culture and tradition, and is a one-of-a-kind.

In 1995 Umbro took a classic, narrowed the red band down the middle, put the crest front and centre, and replaced the plain details were replaced with stripes, thus creating the perfect Ajax jersey. The Dutch outfit wore this one all the way to the Champions League final in 1996.

Garish, shiny, and very loud. But unmistakably iconic. This one often ends up on lists of the very worst Manchester United kits, and while we understand it won’t be to everyone’s liking, it’s one of the most memorable throwback jerseys ever.

Fusing modern and vintage in a bold way, the laced chest, wide collar and clashing colours split right down the middle made this one stand out at a time when jersey designs were really coming into their own. The period style photoshoot to promote the kit is another reason this one sticks long in the memory.

Much like Arsenal’s maroon kit in 2006, this green and gold effort was created to commemorate the club’s roots, dating all the way back to the 19th century when United were known as Newton Heath. Sadly we’ll never see one like it again due to anti-Glazer fans appropriating the colours as a means of protesting the unpopular owners.

Parma 1999, what a side! pic.twitter.com/zTLvBye6Xp

During the nineties no team looked like Parma and their blue and yellow hoops. During a golden period for the Italian outfit, they wore this iconic top when they won their second Uefa Cup in four years in 1999. What a team that was.

In 1994 Nigeria made a splash at their first ever World Cup by smashing a very good Bulgarian side 3-0 and by sporting this excellent jersey. This African print-patterned effort, worn by Nigerian heroes such as Jay-Jay Okocha, Sunday Oliseh and Daniel Amokachi, was different from everything Adidas were producing at the time, and makes you wish kit manufacturers would use local influences more often.

Read: The story of the kit – Five foreign clubs who took the British look