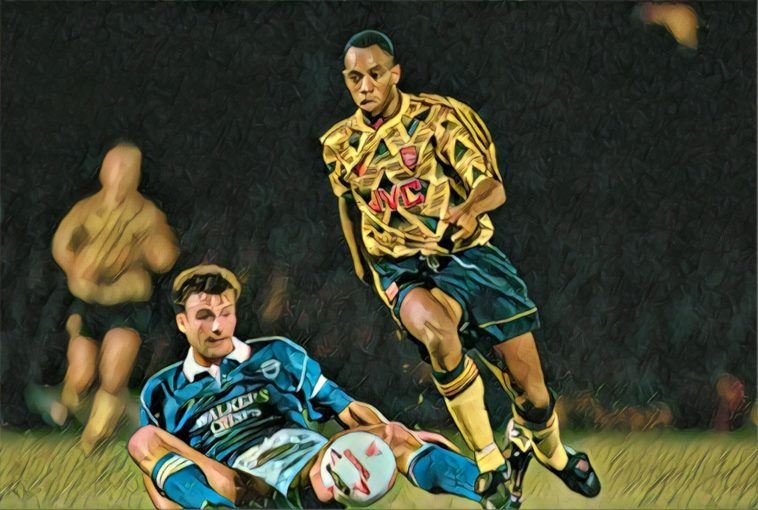 Adidas have dipped into the past for Arsenal’s new kits for the 2019/20 season, but what is the best away jersey the club have worn over the years?

The demand for nostalgia has never been greater. It’s a consequence of growing older and learning to be more cynical of the world we live in that we attribute the past to happier times. Football is the perfect connection to those happier times, transporting back to the moments we fell in love with the game.

The free market loves an opportunity to make a profit and Adidas have coldly exploited this sepia-tinted wistfulness to greater effect than most in the burgeoning jersey business. The German company’s reconciliation with Manchester United has seen them reproduce a great deal of cult classics from the eighties and nineties, while at last year’s World Cup they caught a lot of headlines with their evocative kits for Germany, Colombia and Argentina, among others.

The contrarian view is that this is a lazy method of creating ‘new’ products in an era where companies are running out of ideas because they’re making three new kits per club per annum. But they don’t care, and to be honest, even I am susceptible to this form of marketing.

Earlier this summer Adidas revealed Arsenal’s jerseys for the 2019/20 season, and I mean, come on. Just look at them:

Quality. The two kits riff on classic Gunners gear. The home one is almost a direct replica of the 1988/89 jersey, while the away effort is loosely based on the infamous banana top from 1991.

It’s a good time then, to look back at some of the finest away kits the north London outfit have worn down through the years. This was an extremely tough list to whittle down to just five, but if I had to single out one that didn’t make the cut,  it has to be the classic yellow top with blue collars they wore in 1979.

You know the one, they wore it in the five minute final. Liam Brady, Pat Jennings, Alan Sunderland and all the gang having the best moment of their life in this piece of kit. So yeah, deserves a mention.

A brand new crest and a new stadium under construction meant a new Arsenal. This futuristic design pointed to a new dawn for the club, although I’m pretty sure I am alone in thinking this was a great shirt. You’ll never convince me otherwise.

There was something so apt about Arsenal being sponsored by a games console in the late nineties and into the early noughties, considering Arsene Wenger’s charges were playing like something out of FIFA 2000. You have to love the alternate sponsors for home and away kits, with Dreamcast adorning the red shirt and SEGA the golden top. They wore the latter when Sylvain Wiltord scored against Manchester United at Old Trafford to win the Premier League.

Arsenal had some excellent away kits in the nineties but I feel this one is distinctly underrated. The two shades of blue complement each other very nicely, but I think I prefer the prototype version. And let’s face it, Arsenal away jerseys should have yellow in them.

Ian Wright scored on his debut against Leicester City wearing this Acid House number in 1991, which has since become a cult classic. The sight of David Rocastle and Michael Thomas ransacking defences in this chevron-style shirt is enough to set Arsenal hearts a flutter. Will Pierre-Emerick Aubameyang and Alexandre Lacazette have the same effect wearing the tribute act next season?

The name Michael Thomas still carries a lot of baggage for Liverpool fans, whose side lost the First Division title on the final day of the season in 1989 thanks to his dramatic injury-time goal at Anfield. This year marks the 30th anniversary of that famous night on Merseyside, so it makes sense that Adidas would riff on that for this year’s kit (although surely it would make even more sense to replicate the away kit more closely?). Yellow, blue and a touch of red shouldn’t really work, but it always does for the Gunners for some reason.