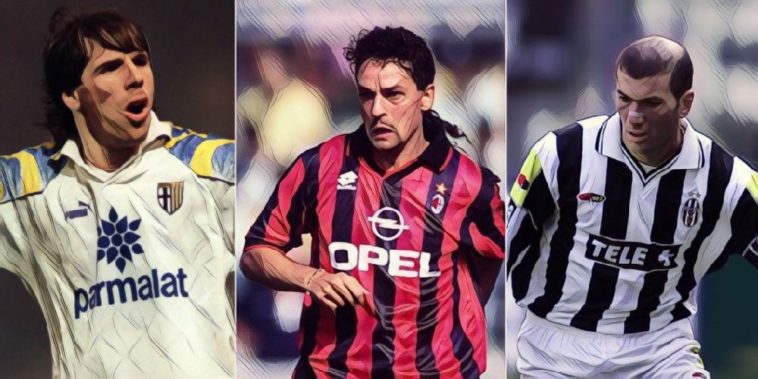 There has perhaps never been a league quite like Serie A in the nineties, Italian football the undisputed home of the game’s finest footballers and a period that evokes utter nostalgia from fans across the world.

Italy’s top division was awash with Ballon d’Or winners and all-time greats, the division breaking the world transfer-record on six occasions throughout the decade and their leading clubs dominating continental competition.

Serie A’s assemblage of the best talents in football throughout the nineties is unlikely to be repeated in the modern game, and we’ve decided to look back at a golden age for Italian football and revisit some of the most memorable stars of the era.

Arguably the definitive star of nineties Serie A, Baggio was at the peak of his considerable powers throughout the decade and the star-turn for several of Italy’s biggest clubs.

Il Divin Codino was the creative heartbeat of a Juventus side during the first half of the nineties, his ability to decide games almost singlehandedly with daring dribbles and magical moments of brilliance marking him out one of the world’s best, finishing as the leading scorer for the Bianconeri in four successive seasons.

The poster boy for Italian football at a time the country’s sport was truly thriving, Baggio is recognised by many as the most talented player his nation has produced, artistic in style and a player whose effortless ability won him admirers at a succession of sides.

He was named as the winner of the FIFA World Player of the Year and Ballon d’Or in 1993 and won Serie A titles with both Juventus and AC Milan, later proving a hugely popular figure during a sensational renaissance season at Bologna and latter spells at Inter Milan and Brescia.

The quintessential nineties playmaker, Rui Costa arrived in Italian football after coming through the hallowed ranks of Benfica’s academy system and swiftly brought a touch of elegance and class to a league largely renowned for its defensive strength.

With slicked hair, trademark low socks and poetic balance, the Portuguese playmaker glided past opponents and carved defences open as the creative fulcrum of an exciting Fiorentina side, regularly providing opportunities for the grateful and goal-hungry Gabriel Batistuta.

For some players of Costa’s ilk can be described as luxury footballers, but for others, the nonchalant creative talents of the star are what wins hearts and makes football so captivating.

Though his greatest honours came in the colours of AC Milan following the turn of the millennium, the finest football of Costa’s career came arguably with the Viola, ghosting and gliding around Serie A pitches as the conductor in chief of a quality Fiorentina side.

Appreciating the four legends to make over 600 Serie A appearances

The Sardinian schemer was tasked with becoming the long-term replacement for Diego Maradona at Napoli, with the Argentine taking a young Zola under his wing as he honed his talents in Naples.

Zola had formed part of the Napoli side which was crowned as champions of Italy during the 1989/90 season, before beginning to thrive as part of an exciting side and finishing as the leading assist provider in Serie A three years later as he inherited greater responsibility following Maradona’s exit.

Financial problems forced Napoli into the sale of their prized asset, however, and Zola signed for a Parma side who enjoyed a golden period in their history and became one of the most iconic sides of the nineties.

Zola scored 49 goals in just 102 league appearances for Parma during an impressive four-year spell, featuring alongside illustrious names such as Gianluigi Buffon and Fabio Cannavaro and inspiring the club to UEFA Cup success in 1994/95.

If the best players appear to have more time on the ball, the game seemed to stop entirely when Zinedine Zidane was in possession.

Zidane arrived at Juventus with the club in need of creative  inspiration following the departure of Baggio, and it was in the colours of the Old Lady that the Frenchman began his path to becoming arguably the greatest player of a generation.

He overcame a difficult start to establish himself as one of the leading names in a division stacked with quality, an expressive and elegant talent who stood out as a star even amongst the biggest names in the sport.

He won the first of three FIFA World Player of the Year awards and the Ballon d’Or during the late nineties, a spell-binding star whose legend began during a golden era for Italian football.

Zinedine Zidane – 15 of the best Quotes about the French Legend

Italian football’s abundance of playmaking talents began to make way for an emerging crop of number 10s towards the mid-to-late nineties, with Alessandro del Piero at the forefront of a new breed of talent.

It took Juventus just a handful of matches to be convinced by the talents of a teenage Del Piero, signing the youngster from Padova for an eyebrow-raising fee of €2.5m – a figure which surprised at the time but became arguably the best investment in the club’s history.

Del Piero hit a hat-trick on his full debut and from there continued to rise to prominence, establishing himself as an emerging star, a trequartista who combined flair and creativity with devastating end product.

He inherited the number 10 shirt from Baggio and became increasingly influential during a hugely successful period for the Bianconeri, winning three Serie A titles in just four seasons during the nineties and helping Juventus to three consecutive Champions League finals – the first of which saw the Old Lady crowned champions of Europe after defeating Ajax on penalties.

He finished his career having won six league titles, in addition to holding the all-time appearance and goalscoring records for Italian football’s most successful club.

There are perhaps few names as synonymous with Juventus as that of Alessandro del Piero.