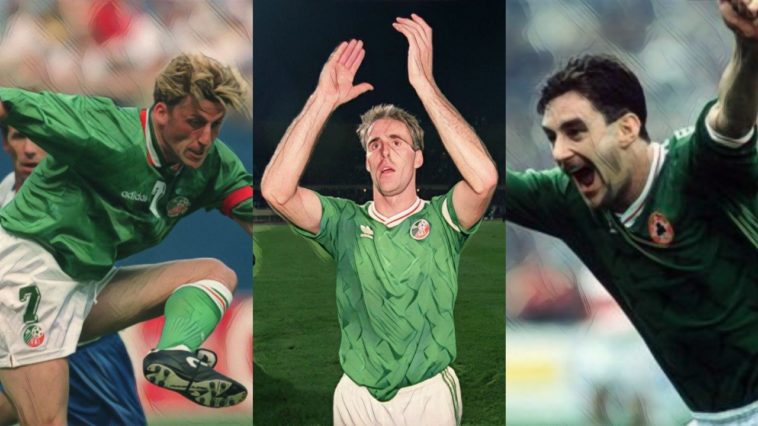 For decades the Republic of Ireland national team has drawn on the diaspora for its football players, the descendants of Irish men and women who left the country over the years in search of a better life.

While Ireland has produced many talented individuals in its own right, the massive pool of footballers it can call on from outside the country has helped the side punch above its weight in the past thirty years and more.

With England hosting Ireland at Wembley tonight, we trawled through all of the English-born players to have represented the country of their ancestors to see if we could construct a Granny Rule XI that could win the World Cup.

Okay, that’s probably a bit far-fetched, but we are pretty pleased about this team of foreign nationals who represented the Boys In Green.

Between the sticks is probably the lightest position in our starting eleven, as we have had no problem producing fine goalkeepers of our own.

Alan Kelly, born in Preston, was a good goalie, but had the misfortune of playing second fiddle to Ireland’s greatest ever stoppers in Packie Bonner and Shay Given. He went to USA 94 and Korea/Japan 2002, but didn’t play a single minute in either.

Kelly started out at his local club, Preston North End, but played the bulk of his career at Sheffield United, before ending his career at Blackburn Rovers. He is currently the goalkeeper coach for the national team and Everton.

A position with oodles of competition, Mark Lawrenson is without doubt one of the most talented players Ireland have ever had at right-back.

Certainly good enough to start for England, ‘Lawro’ spent the bulk of his career at Liverpool during their wildly successful period in the eighties. He won five league titles and the European Cup while at Anfield, leaving the club in 1988 to join the Tampa Bay Rowdies.

Born in Preston, Lawrenson qualified to play for Ireland through his Waterford-born grandfather, Thomas Crotty, and earned 39 caps in his international career. Sadly, injury prevented him from going to Euro 88.

#OTD in 1987: A Mark Lawrenson goal gives Republic of Ireland a crucial 1-0 win in Scotland in a Euro 88 qualifier. pic.twitter.com/juJHu8InH7

Mick McCarthy is as South Yorkshire as they come, but he’s also Irish to the core. Beneath his thick Barnsley accent is a man who bleeds green; in his autobiography he wrote “so what if I was a dirty fenian bastard?” in reference to the abuse he got from Rangers fans when he joined Celtic.

‘Big Mick’ was a stalwart in the centre of Ireland’s defence during the Jack Charlton era, playing a key role in their success at Euro 88 and Italia 90. Qualifying for Ireland through his father, McCarthy made 57 appearances for the Boys In Green, scoring two goals.

The towering centre-back, who briefly lined out for Lyon in France, also took over as Ireland manager on two occasions, taking the team to the World Cup in 2002.

Paul McGrath and David O’Leary are, on a technicality, the best English-born centre-backs to ever play for Ireland, but it feels like cheating to include either; both men grew up in Ireland and played all of their youth football locally. Their birthplace is barely an afterthought to Ireland fans and there was never any chance of them representing The Old Enemy.

And that is the only reason why Phil Babb even gets near this team.

To be fair to the defender, he made 170 appearances over six years for Liverpool in the nineties, winning the League Cup in 1995, before playing for Sporting CP in Portugal. He was a regular in the Ireland team, winning 35 caps, four of which came at USA 94.

20 years ago today: A disaster for Phil Babb’s knackers…pic.twitter.com/8ZRO4d0IEM

But Babb also courted controversy. The Lambeth-born defender was arrested along with Ireland teammate Mark Kennedy “after appearing in court charged with drunken and abusive behaviour and causing criminal damage.”

Babb missed out on the World Cup in 2002 as a result and didn’t play for the country again until September of that year. In his comeback match, a Euro 2004 qualifier against Russia, he came on with five minutes… and put the ball in his own net with his very first touch.

He never played for Ireland again.

1985 – The year of Our Lord and the Dalymount Crush

The oldest player on this list, Shay Brennan played on one of the great English teams of the twentieth century. The Manchester United full-back spent his entire career at Old Trafford, winning two league titles and the European Cup in 1968.

A local lad, Brennan’s first game for the club was also the first match following the Munich Air Disaster. The first Irish international to qualify for the national side through parentage, he won 19 caps for Ireland. He passed away in 2000.

Chris Hughton, an FA Cup and Uefa Cup winner with Tottenham Hotspur, can count himself incredibly unlucky not to make it into this team ahead of Brennan, but his legacy is too hard to ignore.

Five of the best League of Ireland exports to the Premier League: McGrath, Keane, Coleman

More known for his terrible takes whenever he opens his mouth these days, Jason McAteer was a fine footballer in his day.

The Birkenhead native started out at Bolton Wanderers before moving to Liverpool where he made 139 appearances and played in the 1996 FA Cup final, losing to Man United.

McAteer, who made 52 appearances for the Boys In Green, scored a crucial goal against the Netherlands in 2001 to ensure the side qualified for the World Cup playoff ahead of the Dutch.

#OTD Jason McAteer put the ball in the Dutch net! Ireland beat Netherlands 1-0 on September 1, 2001, to effectively out them into the World Cup playoffs. #COYBIG pic.twitter.com/NRaXWZrL64

Born in Maidstone, Andy Townsend was one of the best English-born players to ever represent Ireland, winning 70 caps and captaining the team at USA 94.

A two-time League Cup winner with Aston Villa, Townsend also played in all five matches of Ireland World Cup campaign in Italy four years previously. The former Chelsea midfielder scored in the penalty shootout against Romania that took them to the quarter-finals.

Born and raised in Manchester, Alan McLoughlin began his career at Man United, but never turned out for the senior team. He played for a number of clubs during his career, including Swindon Town, Southampton, Portsmouth and Wigan.

McLoughlin won 42 caps for the Republic, including two substitute appearances against England and Egypt at Italia 90. His greatest contribution to the Irish cause, however, was his superb equaliser against Northern Ireland in 1993, which ensured qualification to the 1994 World Cup.

23 years ago today, this late goal from Alan McLoughlin in Windsor Park sent the Boys in Green on their way to the 1994 World Cup! #COYBIG pic.twitter.com/eDfWWxTcRU

Adept at both left-back and on the wing, Kevin Kilbane won a mammoth 110 caps for the Republic of Ireland over 14 years, appearing at the 2002 World Cup in Korea and Japan.

Between 1999 and 2011 ‘Zinedine Kilbane’ played in 66 consecutive competitive international matches, the second-longest run in international football after England’s Billy Wright who reached 70.

Born to two Irish parents, the former Everton and Sunderland player was Ireland’s Player of the Year in 2004, but unfortunately had to retire due to injury in 2012, missing out on that summer’s European Championship.

Jack Charlton wasn’t just a football man, but a cultural touchstone for an entire nation

Beyond the Scouse accent, few players were as passionate about wearing the green jersey as John Aldridge. Qualifying through his grandmother in Athlone, he went to win 69 caps and appeared at three major international tournaments.

‘Aldo’ came to prominence at Oxford United during the club’s golden age, rising through the divisions and winning the League Cup in 1986. His terrific form there earned him a move to Liverpool, where he won the league and FA Cup during a two-year spell before moving on to Real Sociedad in La Liga.

Remarkably, despite scoring at least 20 goals in 13 of 14 seasons at club level, he initially struggled to find the net for Ireland, failing to score in his first 20 matches. After finally getting off the mark against Tunisia in 1988, he went on to score 19, putting him fourth in Ireland’s all-time list of goalscorers.

On this day 25 years ago, John Aldridge got really mad with some dope in a yellow cap. #USA94 🇮🇪 pic.twitter.com/AQbEBqZy0y

Ron Atkinson exclusive: ‘I used to joke with Jack that I had more Irish players than he did’

Another striker who scored 19 goals for the Republic, Tony Cascarino represented the country with distinction, earning 88 caps over a 14 year span. Just like Aldridge and Townsend, he played at three major international tournaments.

A rising star at Millwall, where he and Teddy Sheringham’s formidable partnership produced 99 goals between them, ‘Cass’ also lined out for Aston Villa, Chelsea and Celtic before moving to France. He still holds the record as the oldest player to score a hat-trick in Ligue 1, doing so at 37 years of age at Nancy.

Cascarino doesn’t have actually any biological link to Ireland, but qualified for Ireland through his adopted grandfather from County Mayo. He also qualified to play for Scotland and Italy.

It’s a textbook header, but the real star of the show is that ball fizzed out wide by Ronnie Whelan.

Here's our Granny Rule XI ahead of tonight's match 🇮🇪🏴󠁧󠁢󠁥󠁮󠁧󠁿

See Also: From Italia 90 to Euro 2016 – Five of the best Ireland jerseys of all-time