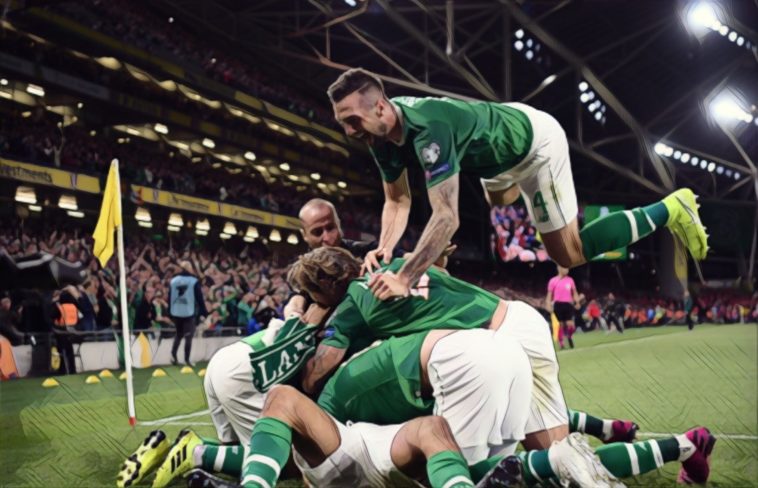 Ever since the Republic of Ireland drew with the Soviet Union at Euro 88, 1-1 has become what you might call ‘the national result’. In the decade preceding that encounter, Ireland had only finished a game with that scoreline on three occasions. In the 31 years since, we’ve had fifty.

Ireland reached that milestone of sorts in their Euro 2020 qualifier against Switzerland at home last week, Sheffield United’s David McGoldrick cancelling out the opener from Fabian Schär of Newcastle United with a late header. The Boys In Green face Bulgaria in a friendly at Lansdowne Road this evening, and there’s a fair chance they will add to the list of stunning stalemates we’ve seen in recent years.

Some of these draws have been desperately disappointing results, evidence of Ireland’s inability to get over the line, but others have been some of the greatest and most memorable results in Irish football history.

When Ireland qualified for their first major tournament at Euro 88, they caused the mother of all shocks by beating England in Stuttgart. It was the result that kicked off the Jack Charlton era and a period of unprecedented success for the national team. But it was also the game that shattered any semblance of an inferiority complex against stronger footballing nations, particularly them across the water.

So when these two met again a couple of years later, there was zero chance of Ireland fearing Bobby Robson’s charges. Still, it was a piss poor game in which England took the lead in the eighth minute through a scrappy Gary Lineker goal. But Kevin Sheedy provided the equaliser with an excellent strike in the 73rd minute.

It was a fantastic result for the Irish, but it was seen as a disaster in the English press, who hounded Robson at any available opportunity. That was all forgotten when they reached the semi-finals, while Ireland went out at the quarters to hosts Italy.

Remember, remember the 17 of November. Well, anyone who bore witness to events that night are unlikely to forget them in a hurry. For this was a night of intense rivalry, hatred, a kitless Tony Cascarino, and Jack Charlton uttering “up yours” at the opposition manager after the whistle.

This was also north versus south, as the Republic of Ireland travelled to Belfast needing a result from their final World Cup qualifier. A win would secure qualification for the tournament in the USA, but a draw would also suffice if the result of Spain versus Denmark was favourable (I’m not going through all of the permutations, and that’s for your sake, so you’re welcome).

Taking place during the Troubles, tensions off the field were running high, but it was a tepid affair on it for the most part with the scoreline 0-0 at the interval. “The match never rose above the level of perspiring mediocrity,” said Ken Jones in the Independent.

Until the 71st minute that is, when Northern Ireland took the lead through a brilliant volley from Jimmy Quinn. Ireland manager Charlton responded by bringing on Cascarino, or at least he tried to, but when the striker unzipped his tracksuit he found that he hadn’t changed into his kit. “His face turned purple,” said Cascarino. “I thought he was going to have a heart attack. ‘You fucccccking idiot!’”

The Chelsea striker’s very existence might well have been saved by Alan McLoughlin —  “there’s a fair chance Jack would have chinned me” — who scored the equaliser in the 76th minute. Ireland pushed for a winner as there was a possibility it would not be enough, but Denmark, the reigning European champions, lost to Spain, meaning the Irish went through on goal difference.

When Charlton went to shake hands with the North’s manager Billy Bingham, who was managing his last game after 17 years in charge, the former Leeds United player instead said “up yours”. He immediately regretted it, apologising to Bingham soon after.

The main thing was that Ireland had qualified for the World Cup for only the second time in their history, and they had done it with a 1-1 draw.

Ireland didn’t qualify for another tournament for eight years, when they reached the finals in South Korea and Japan. They drew 1-1 with Cameroon in their opening group fixture, before facing the daunting task of Germany in the second game.

The Germans took the lead in the 19th minute through Miroslav Klose, who would go on to rack up a tally of five goals that summer, and looked good for all three points. That was until a certain Robbie Keane popped up to steal a late equaliser.

A long ball was flicked on by the nation’s favourite beanpole Niall Quinn in the direction of the former Tottenham Hotspur striker, dispatching the ball into the goal in the 92nd minute. Only Keane and Ronaldo managed to get past the imperious Oliver Kahn that summer.

Ireland qualified for the second round, where they went out to Spain on penalties after drawing — yes, you guessed it — 1-1. In a sport where a draw is statistically the least likely outcome, Ireland managed to do it three times in four matches.

The best ever League of Ireland exports to the Premier League

When Ireland were drawn in the same qualification group as soon-to-be world champions Germany, every fan’s head drooped in dread for what was to come. The most fearsome force in international football at the time had played in Dublin just two years previously, doling out an horrific 6-1 beating in the dying days of Giovanni Trapattoni’s reign.

The team was now under new management, as Martin O’Neill and Roy Keane took charge for their first campaign, but hopes were still dismally low. But Ireland held out for the majority of the match, keeping Germany at bay until the 70th minute. Stephen Quinn made the foolish decision of backing off Toni Kroos, who duly dispatched a terrific long range effort past goalkeeper David Forde.

Going down by a single goal to the World Cup winners on their home patch would be far from an embarrassing result, but with just 50 seconds left on the clock the unthinkable happened. The ball is knocked into the home side’s box, where John O’Shea of all people gets a touch on it. The former Manchester United defender’s shot trickles beyond the reach of Manuel Neuer, earning Ireland a precious point. And another unforgettable 1-1 draw.

The five Irishmen to have won the Champions League

Ireland’s qualification campaign for Euro 2016 was defined by late salvos, having rescued precious points against both Georgia and Germany at the beginning of the campaign. Down by a goal at home to Poland, they would need to pull out another, this time at Lansdowne Road.

The visitors grabbed a first-half lead through Slawomir Peszko, but chose to sit back rather than build on their lead. That invited the Irish onto them, but it seemed for all the world as if they wouldn’t take advantage. That’s until Shane Long popped up with a deft little chip over Lukasz Fabianski to settle things.

The Tipperary native’s goal was the catalyst for huge celebrations by the home crowd, reigniting an atmosphere that had been missing at the ground for years. And it also kept their qualification for the finals on track.

Read: Why are clubs choosing youth over experience for managerial roles?

See Also: Nine Irish youngsters at Premier League clubs to look out for in 2019/20