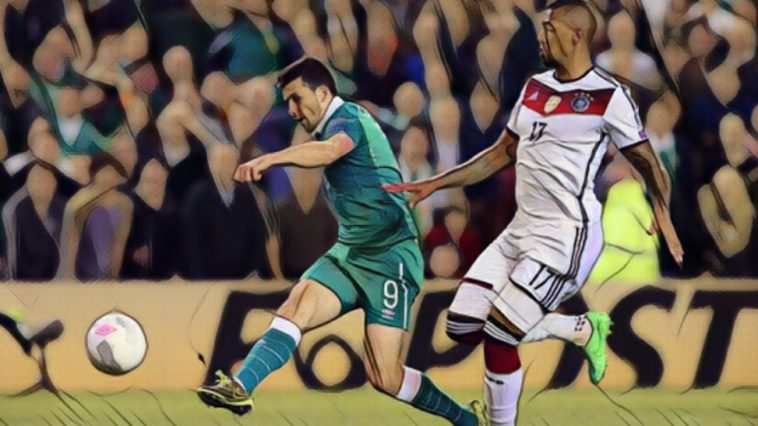 For such a small nation, the Republic of Ireland have pulled off some extraordinary wins over the past four decades. Here are six of the best.

Yes, it was ‘only’ a friendly, but this result went a long way to instilling the confidence in a side that would go on to play at three of the next four major international tournaments.

The early misgivings about Jack Charlton, who had only been manager for a year at this point, began to ebb away and were replaced by a belief that his system could bring the results that had eluded talented Irish teams from decades.

Liam Brady, arguably Ireland‘s most talented player ever, scored the winner that day, but he would ironically miss out on that entire era as he didn’t fit the manager’s style of play.

The Republic of Ireland’s first ever major tournament began with arguably its greatest ever victory, as Jack Charlton’s men secured a shock win over Bobby Robson’s England in the group stage opener of Euro ’88.

The English press, as contradictory as ever, were extremely bullish about their national team’s odds against Ireland while at the same time tearing into the manager at any opportunity. Egg would be planted firmly on their faces after this game.

Ireland got off to the perfect start in Stuttgart, as Ray Houghton headed the ball across the English goal, past goalkeeper Peter Shilton and into the net after just six minutes. The Liverpool midfielder was not known for his heading ability, but it lead to the famous line “Who put the ball in the English net?” that would live on in Irish footballing lore.

Charlton placed his hand on his head in disbelief, while the Irish fans in attendance went berserk with joy. With an ugly yet effective performance, Ireland held on to kick off a glorious era for the side. You can watch the game in full here, if you fancy.

It’s the Irish footballing moment that has been relived more times than any other – Ireland defeating Romania in a penalty shootout to reach the quarter-finals of the FIFA World Cup in 1990.

The Boys In Green drew all three of their group matches, finishing with the exact same record as Netherlands, meaning lots had to be drawn to decide which team they would be facing in the last-16; the Dutch got eventual winners Germany, while Ireland were paired with the Romanians.

As with many Ireland games of that era, the fare offered up wasn’t the prettiest on the eye and there were few moments of note during the game itself, aside from a Kevin Sheedy chance at the back post that almost went in and a John Aldridge reducer on Gheorghe Hagi on the stroke of halftime. The former Liverpool striker was lucky not to be sent off there and then.

Neither side could be separated by 120 minutes of action, so it went to penalties. The first eight were all successful, before Romania’s final effort by Daniel Timofte was denied by Packie Bonner, the Celtic goalkeeper making the single most important save of his career.

That meant Ireland would win if they could score the next attempt, but to the surprise of everybody, including Jack Charlton, David O’Leary stepped up to take it. The Arsenal defender hadn’t played a minute of the tournament before this tie, but now the team’s fate laid in his hands.

With everyone in Ireland anticipating the final spot kick, commentator George Hamilton found the perfect words to sum up the moment as O’Leary ran up to the ball: “The nation holds its breath… yes, we’re there!”

Although beating Romania on penalties may not seem like such a huge feat, but the country’s biggest club, Steaua Bucharest, won the European Cup in 1986 and reached the final again in 1989, and the national team went on to qualify for four of the next five major tournaments, including a terrific showing a USA ’94, where they missed out on the semi-finals in another penalty shootout defeat.

Before the game kicked off RTE commentator George Hamilton called Ireland versus Italy at USA 94 the biggest, most important game of football in the country’s history. It’s a massive claim, but probably true: here they were playing one of the favourites, a side that knocked them out in the quarter-finals four years previously, in their opening match of the tournament.

In front of a packed Giants Stadium in New Jersey, the Republic took a shock lead. The Italian defenders were uncharacteristically sloppy at the back, allowing Ray Houghton to steal the ball at the edge of the box. Noticing that goalkeeper Gianluca Pagliuca was off his line, the Aston Villa midfielder hit a looping shot that fortuitously went in.

Ireland, sensationally, were in the lead after just 11 minutes, but that meant they would have to hold on for dear life for the next 80-plus minutes if they were going to snatch a famous victory. It was an especially difficult task given the star power the Italians could call on.

Roberto Baggio was considered one of the greatest players in the game at the time, if not the greatest, but ireland had Paul McGrath on their side. The centre-back put his best performance in a green shirt, which is still considered the top individual performance by an Irish player.

Having inflicted two big defeats on Ireland in major tournaments, as well as ending their Euro ’96 dreams with a play-off win at Anfield, the Dutch could have been considered their arch nemesis during this period. But in 2001 the Irish finally got one over the Oranje.

Ireland did, however, ride their luck for much of the match at Lansdowne Road, as mistakes from Gary Kelly and Richard Dunne gifted the visitors some excellent chances that they failed to convert. Kelly was then sent off in the second-half for two needless yellow card challenges, stacking the odds against them.

A breakthrough came in the 68th minute, though, as Roy Keane moves the ball up the left flank, protecting it masterfully before laying off to Damien Duff, who switches it to the right to Steve Finnan. Phillip Cocu does a decent job of holding the full-back up, forcing the Fulham player to send in a soft cross that misses everyone in the penalty area, but falls kindly to an onrushing Jason McAteer.

The Sunderland midfielder slots it past Edwin van der Sar to send the ground into raptures and potentially into the World Cup. Dutch manager Louis van Gaal sent on Pierre van Hooijdonk and Jimmy Floyd Hasselbaink alongside Ruud van Nistelrooy and Patrick Kluivert in the second-half, but it turned out to be a tactical blunder from the future Manchester United boss; his team failed to breach the Irish defence and would be watching the tournament from home.

George Hamilton once again found the words to sum up the moment: “It has to be one of the most courageous, brave, committed and ultimately the most effective of Irish performances that we have ever seen.”

It was an historic match for more than one reason, as it featured that infamous handshake between manager Mick McCarthy and Roy Keane, a prelude to their falling out at a training camp in Saipan the next summer.

The Battle of Oriel Park: When football and The Troubles collided

In 2015 Ireland appeared to be going nowhere fast under manager Martin O’Neill. Eight games into their Euro 2016 qualifying campaign they could only draw at home to Poland and manage a point out of Scotland in two meetings, meaning they had scant chance of finishing even third in the group.

Germany came to town for the penultimate match of the campaign, with the home fans hopeful, but not optimistic, of a possible repeat of their draw in Gelsenkirchen. The last time Ireland had defeated a ‘big’ country in a competitive fixture before this point was that game against the Netherlands in 2001.

The away side were, as expected, far superior in their passing movements, advancing the ball through the Irish lines at ease, but incapable of creating any attacking chances of note in the final third. Ireland remained resolute at the back, although Shay Given had to be subbed off after sustaining an injury in the first-half.

Darren Randolph surprisingly came on instead of David Forde, but it turned out to be an inspired decision by O’Neill, as the West Ham goalkeeper not only put in a solid performance between the sticks, but set up Shane Long for the winner with an exquisite long ball behind the German defence.

The goal against Germany for @ShaneLong7 from an angle you probably have seen before.
(2015) pic.twitter.com/1uJrBbEPm8

Ireland only had five attempts and 33% possession on the night, leading Germany manager Jogi Loew to decry his opposition’s tactics, but the fact is that they didn’t play well enough in attack to deserve anything out of the game. Ireland were full value for the win on the night, a remarkable result given the last time they had faced the world champions they lost 6-1.

See Also: Five of the best LOI exports to the Premier League