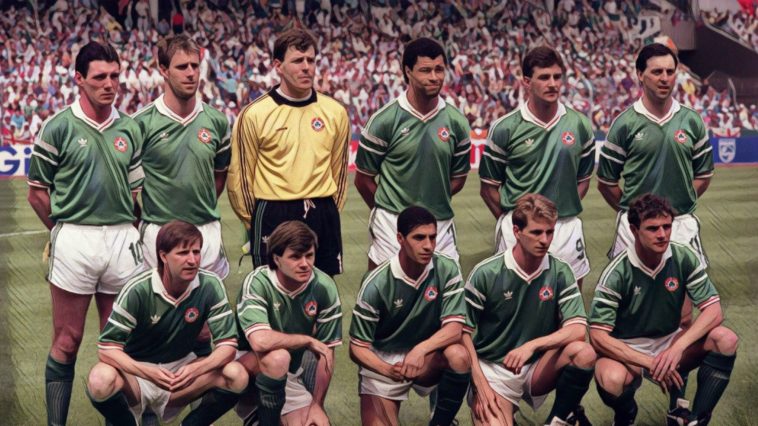 This week new kits were revealed for the Republic of Ireland’s national teams that they will start wearing during November’s internationals.

There was a sense of surprise and, frankly, fatigue from Irish fans when the news was announced, considering it feels as if there has been a new one every five minutes. Even in this age of multiple kits reveals year in, year out, it felt like New Balance were taking the piss a bit since becoming the FAI’s kit manufacturer in 2017.

In just three years they released six kits, leaving no breathing space for each successive jersey to make a mark on the national psyche. They will be quickly forgotten, although their decision to go with a dark shade of green with gold details won’t, but probably for the wrong reasons.

With the American company’s relationship with the Ireland team now over, Umbro have stepped back into the fold to rekindle their long standing relationship with the FAI. The English company have created some of Ireland greatest kits over the years, so it was interesting to see what they would do on their return.

A post shared by The Football Faithful (@thefootballfaithfuldotcom) on Oct 29, 2020 at 2:49am PDT

The result was a fairly simple effort, nothing spectacular and perhaps even a little underwhelming, but the colour is very nice while the collar is a throwback to Ireland’s kit from the early eighties. Curiously, they’ve gone for two different tops for the men’s and women’s teams, something you don’t often see. The latter just about shades it, for me.

Five of the Republic of Ireland’s best ever jerseys:

The GOAT of Ireland jerseys, this updated version of a classic Adidas template was in work when Ireland famously beat England in Stuttgart at Euro 88. It was the first time orange was incorporated into the design to reflect the Irish tricolour, while the trefoil leaves logo is simply iconic.

When Jack Charlton reached #Euro88 it was first time in Ireland that sports shops were filled with replica @FAIreland shirts. The Irish jersey from 1988/90 was literally the fabric of the nation. When Ray Houghton scored v England in this very shirt all our lives changed #COYBIG pic.twitter.com/oAweCZW0iC

This top also randomly popped up in an episode of The Last Dance, the ESPN documentary about the legendary nineties Chicago Bulls team.

Was only a matter of time before an Ireland jersey popped up on #TheLastDance. pic.twitter.com/b8IueBwyJx

Jack Charlton was more than a manager – he changed a nation

An uncomplicated design with a nice collar and perfect shade of green. The overlaying chevrons really gives it that added oomph. Ireland wore this one all the way to the quarter-finals of the World Cup in 1990, making it an iconic piece of clothing in the country’s history.

The most iconic football jerseys of the nineties

A daring effort from Adidas, this was the first time orange took such a central role in the design of an Ireland jersey, with the Opel sponsor emblazoned across the torso.

The faded green and white stripes are tremendous, made all the more iconic by John Aldridge’s infamous touchline meltdown at USA 94. Sadly this was only worn for one year, as the FAI moved from Adidas to Umbro soon after the World Cup.

26 years since John Aldridge called some chap in a yellow hat a "twat" during one of the all-time great touchline rants. #USA94 🇮🇪 pic.twitter.com/AQbEBqZy0y

The simplest design of the lot, this Ireland jersey holds fond memories for supporters from the Fifa Men’s World Cup in 2002, where Ireland reached the round 0f 16. A nice round collar, a lovely, glossy shade of green, and great lettering and numbering.

#COYBIG In case you didn't know Didi Hamann played for Ireland in the 2002 World CupvGermany. Still has his jersey!! pic.twitter.com/UPbePHRei8

The beauty of having a kit manufacturer that no other team at a major international tournament uses is that you can have a completely unique and exceptional kit, while other nations sport templates that feel common and ordinary.

That was exactly the case with Ireland’s Euro 2016 jersey, which was a wonderful combination of modern and retro. The two-tone diagonal stripes are a nineties inspiration, while the incorporation of neon orange give it a real pop. The Three sponsor is ugly, but the level of depth and detail makes it an instant classic.

Read: The best League of Ireland kits from the 2020 season

See Also: 1985 – The year of Our Lord and the Dalymount crush