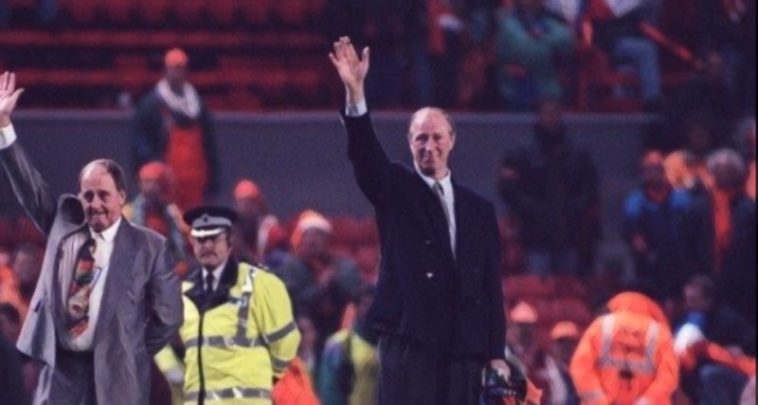 “We crowded round the table with our money in our hands, I landed on the other side without a penny in my pants. Woke up in the toilet when we got to Holyhead…”

In 1963 brothers Kingsley and Charles Ward purchased a farmhouse in the village of Rockfield, Monmouthshire in Wales. Within two years the brothers had converted the property into the world’s first residential studio, set up so that music bands could come and stay in the peaceful rural surroundings to record.

Thirty years later in the spring of 1995 work was underway for another set of brothers. The Gallaghers laid siege to the studio and created music for a generation in the form of the album What’s the Story Morning Glory?.

The Gallaghers Noel and Liam, alongside bandmates Paul Arthurs, Tony McCarroll and Paul McGuigan, hailed from Manchester, but their surnames showed all were of Irish descent. Every summer Noel, Liam and older brother Paul would be ferried from the back streets of Manchester to the fields of Charlestown, Mayo by their uncle Paddy Sweeney in his estate car. He would travel over the Pennines from Barnsley where he worked in the pit, the same Yorkshire pit that had housed the father of current Irish international manager Mick McCarthy, who had left Waterford for work.

As Oasis, with the help of Welsh producer Owen Morris made the crossover from indie act to worldwide rock phenomenon, the godfather of Irish football Jack Charlton that same spring was looking forward to welcoming his fellow countrymen to Lansdowne Road. Charlton, who by then was in situ as Republic of Ireland manager for nearly a decade, had replaced ‘Go Home Union Jack’ with the creation of the ‘Olé Olé Olé…’ brigade.

Throughout his tenure, the man from Northumberland had orchestrated glory days in different corners of the world, from Stuttgart when a lad from the Castlemilk estate in Glasgow headed past Peter Shilton, to Malta where an Aldridge from Garston, Liverpool sealed Italia ’90 qualification, to the sounds of Amhrán na bhFiann illuminating the Giant’s Stadium, New York at USA ’94.

All roads now led to England for the European Championship of 1996, the Republic were on the same road many of their countrymen and women had taken since the formation of the State. Drawn in pot six alongside Portugal, Austria, Northern Ireland and the minnows of Latvia and Liechtenstein.

Along the banks of the Duguvna river in Riga the Irish got the campaign off to a flyer with a 3-0 demolishing of Latvia, followed by a comfortable 4-0 victory over whipping boys Lichtenstein at home. Next, the Republic found themselves at Windsor Park for another autumnal tie with their neighbours, but this time there would be no repeat of November 1993. The ‘Free Staters’ were buoyed by a convincing 4-1 victory, with Roy Keane opening his international scoring account.

As the wind swept across Lansdowne Road on that spring evening of ‘95 the boys in green were top dogs alongside Portugal in group six. In Charlton’s eyes everything was going to plan as they faced the Euro ’96 hosts England in a prestigious friendly.

In a raucous atmosphere after 20 minutes a Peter Beardsley centre towards the goal at the Havelock Square end was headed away from danger by Irish left-back Terry Phelan. The ball fell to John Sheridan who sprayed a pass to Steve Staunton, Staunton set Phelan away up the left with England winger Darren Anderton on his shoulder. Phelan squared to Sheridan in space about fifty yards from goal, through the eye of a needle Sheridan found David Kelly in the English box. Kelly let fly with a scuffed left-foot effort which sneaked under the body of England goalkeeper David Seaman, sending most of the stadium into raptures.

In effect, the goal was created by the sons of Irish immigrants who made the journey to England for work, to put bread on the table; Terry Phelan was reared in Salford, Manchester, his mother hailing from Tubbercurry, Co. Sligo. The goal scorer David Kelly hailed from Birmingham born to a Dublin father, better known as ‘Ned’, Charlton had recruited Kelly after seeing him score for Walsall on a cold night in the Dales of Rotherham.

The talented playmaker Sheridan also hailed from Manchester. Their families found themselves in a country where signs such as ‘No Blacks, No Irish, No Dogs’ were commonplace, but they had survived, and some had even prospered. Charlton’s success was based on tapping into this Irish diaspora to strengthen his squad.

As ‘Ned’ Kelly turned to the East Stand in jubilation that spring night, the timber from the West Stand Upper in Lansdowne Road began to fall; Combat18 announced their arrival. Charlton found himself on the pitch remonstrating with Irish fans to go home and telling the world’s press “This sort of thing doesn’t happen here…” To the backdrop of crushed skulls and riot shields, some say Jack Charlton lost his grá for the beautiful game.

The reverberations of that February evening in ’95 would have severe repercussions for Charlton and his team as they continued their Euro ’96 qualifying campaign.

Four weeks later the Republic played a rejuvenated Northern Ireland in Dublin. Iain Dowie stunned the home crowd with a 72nd-minute equaliser after Niall Quinn had opened the scoring for the Boys In green. The wheels, however, were back in motion that April when the Portuguese visited Lansdowne Road, and succumbed to a one-nil defeat, the highlight of the night John Aldridge’s celebration of Victor Baia’s own goal into the face of Portugal centre-half Fernando Couto, a gobsmacked look etched on the defender’s face.

As Owen Morris put the finishing touches to What’s the Story Morning Glory? in June 1995, proclaiming confidently to the music press “this will wipe the field with any competition”, Charlton and Ireland headed to Liechtenstein. In front of 3,500 mainly Irish spectators at the Sportpark in Eschen, with Charlton and his management team watching on from folded chairs, Ireland managed 37 attempts at goal and failed to score. As Charles Agius blew the full-time whistle it heralded a famous night for football in Lichtenstein, Charlton told the press hordes “this will hurt us”.

The Irish, still in shock and in need of a lift, headed home to face Austria. Sadly the infamous Harry Ramsden’s challenge, which consisted of a mass of battered fish and chips with complimentary dessert, was on the menu. Ray Houghton, the boy from the Castlemilk Estate in Glasgow, who gave every drop of sweat and blood to Charlton and the Irish cause, opened the scoring against Austria on that Sunday afternoon on 11 June in Dublin.

However, Tony Polster hit a brace for the visitors, ruining the party as Ireland were defeated 3-1 by the Alpine men. In the return leg at the Ernst Happel Stadion in September, Charlton packed the Irish midfield with Roy Keane, Sheridan and Andy Townsend. However, it was too little effect as Austrian striker Peter Stolger ran riot. ‘Goodnight Vienna’ it was.

As John Peel of the BBC announced to the music world “…new in at No.1… It’s What’s the Story Morning Glory?” in October 1995, Charlton and Ireland limped to a 2-1 home victory over Latvia. Automatic qualification was out of their hands now with a final game away to Lisbon in November. On a rain swept night in the Estadio de Luz the lights went out for Charlton and his ageing team, Portugal running out convincingly 3-0 winners.

Charlton’s saving grace was the first of its kind, a playoff match for Euro ’96. Ireland’s opponents were his old adversaries the Dutch. On 13 December 1995 the hordes of Oranje and Green mingled with Christmas shoppers and striking dockers on the streets of Liverpool.

The Irish fans commandeered the famous Kop end and to the sounds of The Fields of Athenry, which would influence a Liverpool version, the team gave one last gallant performance under the gaze of Jack. Alas, it wasn’t to be. With a limited squad due to injury, Terry Phelan and Jeff Kenna played as makeshift wingers and Ireland succumbed to an up-and-coming Holland side with the baby-faced Patrick Kluivert, then only 17, scoring twice.

Following the final whistle, the Irish fans refused to leave the stadium until ‘Jackie’ appeared one more time, as he strode out onto the Anfield turf a fan from Utrecht handed him a Dutch flag.

On that hallowed turf where the Irish of Heighway, Whelan, Aldridge and Houghton had become God-like figures, Charlton turned to the Kop end with flag in hand, cigar in mouth and a tear in his eye waving a fond farewell.

The summer of 1996 saw football and music intertwine, the Three Lions anthem by Baddiel and Skinner becoming the sound of Euro ‘96, while soon after a Spice Girl and a young lad from Leytonstone in London would be the darlings of the tabloid press.

Years later when Noel Gallagher was asked why he didn’t pen the England Euro ’96 anthem, simply he replied, “my uncles would have killed me…”

Read: The Battle of Oriel Park: When The Troubles and football collided