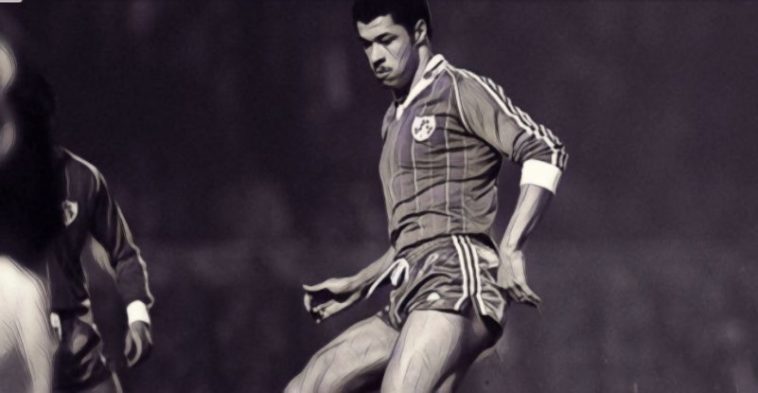 In February 1985 BBC presenter Janice Long stood in Elstree Studios and announced to the watching public ‘Okay! If you have taste, you will appreciate that ‘Meat is Murder’ is the best album around at the minute… The Smiths’.

As the Top of the Pops cameraman turned to the stage, the train sound riff of ‘How Soon is Now’ filled the studio, the crowd of new romantics in the audience took view of the four-piece band on stage.

As the camera focused in, lead singer Stephen Patrick Morrissey with cream slacks, crushed brown velvet top and hearing aid in ear; looked at the camera and proclaimed, ‘I am human, and I need to be loved…’.

That same February week Paul McGrath sat in the Dalymount dressing room, he understood Morrissey’s lyrics, the sentiment behind them, the loneliness, and the pain of rejection.

If you take bus line 79 from Elstree Studios, Boreham Wood it will take you to Ealing, a district of West London, the birthplace of the man the Holte End called ‘God’.

On Dec 4th, 1959 he had arrived into the World, to a London where black protestors had gathered that year in Whitehall to protest about the ongoing racial tensions in Notting Hill.

The summer of 1958 had seen a domestic between a black man and his white wife on the street of Notting Hill, West London turn into a full scale riot – with a mob of 200 right-wing whites rampaging through the area with weapons, screaming ‘Down with Niggers,’ and ‘Go Home You Black Bastards…’.

In the sanctuary of the Dalymount dressing room Paul McGrath in green Éire tracksuit with green shirt, green shorts and green socks on underneath, limbered up.

Paul Nwobilo of Ealing, London; Paul Nwobilo of the Bird’s Nest Orphanage, York Road, Dun Laoghaire, Dublin. On that evening of Feb 5th in the year of our Lord, 1985, he became only the second black man to play for the Republic of Ireland.

The visitors that night at Dalymount Park were the aristocrats of World football and then World Cup Champions Italy. As Paul McGrath sat in the dressing room, he could hear them meandering through the narrow lanes of Phibsboro, man, woman, and child: the laughter, the anticipation, the chanting.

The cash strapped FAI had expected 20,000 fans that night in Dalymount Park, only 28,000 had turned up to Lansdowne Road to witness Mickey Walsh slide on his knees in celebration, as Ireland beat the USSR 1-0 in Sept 1984.

Given this, it was agreed fans could pay at the turnstiles and security on the night would be provided by one hundred and fifteen Gardai, with 80 FAI stewards on hand also.

However, the lure of Rossi, Bergomi, and future Republic of Ireland assistant manager Marco Tardelli was enough to entice the great Irish public in vaster numbers.

As Deirdre Nugent of the Tallaght Youth band practised ‘The Soldier Song’ on her snare drum in the backrooms of the stadium, outside ten thousand souls were being crushed in a space no bigger than your average box room, pandemonium reigned.

Thirty minutes before the 7:30 kick off thirty thousand had already entered the stadium, with children starting to get crushed at the front of the terracing.

It was agreed that the match would be delayed by fifteen minutes, given the numbers still trying to enter the stadium. With stewarding non-existent outside at 7:10pm the Gardai decided to open the Church Side entrance to the Shed End of Dalymount, relieving the pressure outside and allowing the masses in.

However, this created a domino effect creating a crush inside the stadium as fans jockeyed for positions and space in the stands and on terraces.

As Irish President Dr. Patrick Hillery put a cup of tea to his lips waiting to be directed to the tunnel for pre-match ceremonies, the terrace swelled with bodies as children became crushed against the fences of the terrace.

In the knowledge they had a catastrophe on their hands, the pitchside fences were opened by the guards, alleviating the crush and allowing youngsters to breath fresh air as they set foot on the hallowed turf of Dalymount Park.

The red-carpet awaiting Dr. Hillery’s arrival was suddenly trodden on by the feet of the sons and daughters of working-class Dubliners, as the Tallaght Youth Band limbered up pitchside with smiling children’s’ faces all around them.

By 7:45 as the teams emerged there were bodies at every corner of the pitch, as the Band struck up Amhráin na bhFiann and Rai TV of Italy filmed the chaos.

Eoin Hand then manager of the Republic of Ireland had to ask a group of youngsters to make way in the dugout for Paul McGrath and the rest of the Irish staff, while World Cup winning manager Enzo Bearzot was met with ‘sorry mister’ as the locals moved aside.

As big Paul made himself comfortable in the tight dugout, he witnessed the ‘Dayler roar’ at first hand for the first time as the match kicked off, with the Italians fielding seven of their World Cup winning team.

Within five minutes he was suddenly summoned by Hand, Mark Lawrenson then of Liverpool fouled Allesandro Altobelli as he made his way into the Irish box after being set free by Paolo Rossi.

As those on the shed end roof watched the referee point to the penalty spot, Rossi despatched the spot-kick to the left-hand corner of the net, with Pat Bonner diving to the other side.

In the aftermath of his tackle, Lawrenson began to feel pain in his shoulder, he’d actually dislocated it, Mick Byrne tried his magic sponge but to no avail.

On that February evening 35 years ago at 7:55pm with words of encouragement in his ears from Hand, Paul McGrath made his bow to deafening cheers, positioning himself in the centre of defence with one eye on Rossi and the other on Altobelli.

McGrath performed admirably as the Irish lost out 2-1 to the Azzurri, the flame haired Irish midfielder Gary Waddock hitting a thundering strike past Tancredi in the Italian goal.

That Winter’s night the Irish crowd went home happy in the belief their boys had put it up to the World Cup winners, however, lessons had not been learnt with regard to the facilities football matches were being played at throughout Europe.

In May of the same year 11,076 fans turned up at Valley Parade in England to see Bradford City win the old Third Division, that afternoon 56 souls perished as fire engulfed one of the stands with hundreds injured, three weeks later in a dishevelled stadium in Belgium there were more casualties, in what became known as the Heysel disaster.

Nearly a decade after the night at Dalymount Park, Paul McGrath and Ireland took on the Italians at World Cup USA ‘94, in the cauldron of the Giants Stadium.

That day the boy from the orphanage gave the greatest display of defending since Bobby Moore marked Pele in the Mexican World Cup of 1970, in the land of the free and the home of the brave the air was filled with ‘Ooh Agh Paul McGrath’.

Read – The Battle of Oriel Park: When The Troubles and football collided