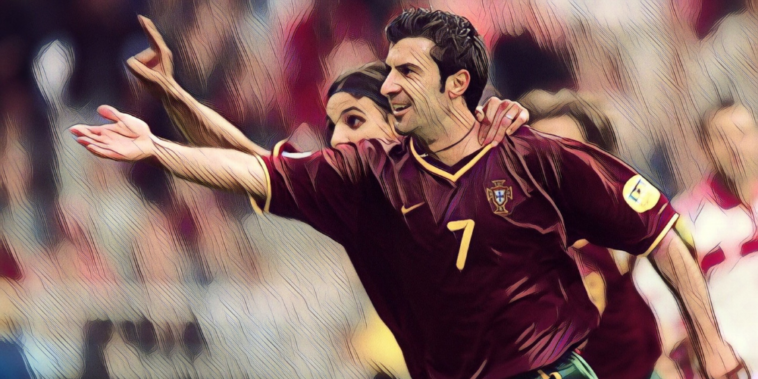 Euro 2000 ranks as one of the greatest international tournaments of all time and most certainly of the modern era, a competition in which the often used moniker of a ‘festival of football’ truly fitted.

There were goals and plenty of them. More per game, in fact, than at any other European Championship in history. It was a summer in which some modern greats were at the peak of their powers and several superpowers of Europe played fine football, the glut of goals mixed with excitement, incident and drama.

Co-hosts the Netherlands starred as the most exhilarating attacking team at the tournament, followed closely by an expansive Yugoslavia, and Portugal’s Golden Generation impressed to reach the last four.

Ahead of this summer’s European Championship we’ve looked back on the stars of past editions, here are five of the best players from Euro 2000.

Euro 2000 featured some illustrious names all at somewhere close to their very peak, though this was a tournament that saw the exquisitely talented Zinedine Zidane cement his status as the world’s finest footballer.

Zidane’s brace in the 1998 World Cup final is often used as the defining image of an incredible career, but he was arguably at his very best two years later to inspire the French to the trophy.

He glided over the pitches in that familiar balletic style, time seemingly stopping still whenever he received possession and side-stepped challenges before threading passes through opposition lines.

Zidane helped France through to the knockout stages after group stage wins over Denmark and Czech Republic, their sole defeat in the competition coming against the Netherlands with their number 10 rested and qualification already assured.

We need to talk about how good Zinedine Zidane was at EURO 2000 🤤pic.twitter.com/Sfsnr2IVU6

It was in the latter stages where Zidane truly came to the fore, however, scoring a sensational free-kick against Spain in a mesmerising quarter-final performance, before an ever better showing saw Portugal chase shadows as the Frenchman reeled off his extensive collection of tricks.

Euro 2000 ended with France as champions and Zidane named the tournament’s best player, another chapter of a career that saw the midfielder become one of Europe’s all-time greats.

Beaten by a Zidane-led French in the final, Italy came within seconds of being crowned champions before a late fightback in the showpiece.

Expectations were relatively low for the Azzurri heading into the tournament despite some notable names, including captain and AC Milan defender Paulo Maldini.

Three wins from three group stage fixtures saw hopes increase, before Romania were dispatched comfortably in the quarter-finals to set up a semi-final showdown with free-scoring hosts the Netherlands.

That fixture proved one of the tournament’s most gripping games despite finishing goalless, the Netherlands missing two penalties as a defensively solid Italy – reduced to 10 men and marshalled superbly by Maldini – took the tie to a shoot-out.

Maldini’s miss from the spot proved irrelevant as Italy progressed to the final where their stubborn rearguard frustrated France, leading the final heading into stoppage-time before Sylvain Wiltord’s dramatic equaliser forced extra-time.

Italy’s hopes of winning a first European Championship since 1968 were ended, but Maldini was named in the Team of the Tournament for a third time, having also achieved the feat in 1988 and 1996.

Luis Figo was the leading light of a talented Portuguese side, one who emerged as one of the favourites for Euro 2000 despite being drawn in a tough group against England, Germany and Romania.

Figo headed into the tournament after a brilliant season at Barcelona and maintained that form throughout, inspiring a turnaround from two goals down against England to win 3-2 in their opening fixture, including a strike from distance that deflected past David Seaman.

He provided the assist as a stoppage-time win over Romania was secured, before a 3-0 thrashing of the Germans made it a perfect group stage record, with Figo and Rui Costa providing the attacking verve.

Figo then dazzled in the quarter-finals against Turkey, setting up both goals for Nuno Gomes as Portugal took full advantage of Alpay’s red card to book their place in the last four.

France ultimately ended Portugal’s run in the semi-finals despite Gomes handing them the lead, Figo unable to provide another moment of magic to drag his side across the line and into the showpiece.

His performances were good enough to earn a world-record move to Real Madrid that summer however, whilst the Ballon d’Or followed in the months following Euro 2000.

Kluivert announced himself to world football with the winning goal in the 1995 Champions League final whilst still only a teenager, but Euro 2000 was the tournament in which he established himself as one of Europe’s leading forwards.

Kluivert was the spearhead of an exciting Dutch side that became heavy favourites to win the trophy on home soil, scoring five goals to win the Golden Boot alongside Yugoslavia’s Savo Milošević.

The forward opened his account with the opening goal as the Netherlands beat Denmark 3-0 in their second game, before scoring once more as world champions France were beaten 3-2 in a thriller.

🇳🇱 Patrick Kluivert scored a hat-trick as the Netherlands won 6-1 to book their place in the EURO 2000 semi-finals!#OTD | @OnsOranje | @PatrickKluivert pic.twitter.com/q7jvcN7eG3

Through to the knockout stages with a perfect record, Frank Rijkaard’s side obliterated Yugoslavia 6-1 in the last eight with Kluivert scoring a hat-trick in one of the tournament’s great individual performances.

Somehow unable to find a way past the Italian defence in the semi-finals, the Netherlands’ 2000 vintage is perhaps one of the best teams not to win the trophy.

In a tournament in which mercurial number 10s rose to the occasion, Francesco Totti provided the breathtaking genius to compliment Italy’s rearguard resistance.

Euro 2000 showed Totti at his best in what proved to be his best displays on the international stage,  creative, captivating and clinical when provided with goalscoring chances.

Dino Zoff was criticised for his failure to get the Azzurri’s wealth of attacking options into the same side, though Totti was justifiably his main man and netted in wins over co-hosts Belgium and quarter-final opponents Romania.

Totti’s class shone through with an audacious penalty in the semi-final shoot-out win against the Netherlands, before a Man of the Match performance in the final, despite defeat to France.

It was Totti’s brilliant backheel that took two defenders out the game and provided the pre-assist for Marco Delvecchio’s opener in the showpiece, though Italian hearts were broken late on.

Totti departed the tournament with his reputation enhanced however, the Roman cemented as one of European football’s most talented players.

“the midfielder become one of Europe’s all-time greats..”

Seriously? He was named as greatest European player of all time by UEFA in 2004, before his last famous performance at 2006 WC (!).

in Football (Soccer) are 3 *true* giants:

and then is rest..