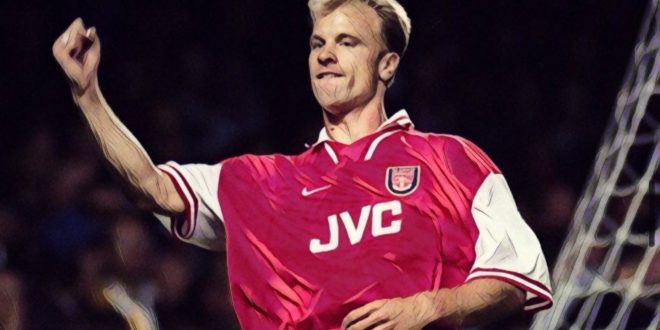 Premier League football has been blessed with an abundance of foreign talent since its formation in the early nineties, the cosmopolitan nature of England’s top tier providing supporters with players of vastly differing styles and skills.

Amongst the pioneers of a new era in English football was former Arsenal forward Dennis Bergkamp, who arrived as one of the league’s first marquee transfers from foreign shores before leaving an indelible mark on the history of the Premier League.

Bergkamp was a player whose talents perhaps seemed ill-suited to previous cultural stereotypes of the English game, his effortless grace in contrast to the blood and thunder often associated with the pre-Premier League era.

The ‘non-flying Dutchman’ arrived from Inter Milan and after a period of adaptation stamped his authority on both the division and an emerging Arsenal side, etching his name into the folklore of one of England’s grandest footballing institutions.

Here is the story of one of the Premier League’s greatest Golazo merchants:

Bergkamp’s origins begin in the Dutch capital of Amsterdam, where like many of the nation’s best sporting prospects he was swiftly inducted into the famed footballing academy of Ajax.

By his own admission, he was intrigued with the game, a sponge for knowledge and possessing a fascination with the ball and how it worked, relentlessly kicking a ball against the wall and programming his mind with the spin and fall, perfecting his touch, technique and control.

It would prove to be staples of a game that would leave a lasting legacy.

At Ajax, Bergkamp worked his way through the club’s ranks under the shadow of legendary former player and later manager Johan Cruyff, the young forward a disciple of Cruyff’s Total Football style in which expressive play was paramount.

It was Cruyff who gave Bergkamp his debut in the first-team whilst only a precocious teenager, and the influence of the iconic Dutchman was not lost on the emerging prospect.

“For all that he knows and teaches, it’s a blessing from heaven for the youngsters to have him as a manager. He let us do things on the field that other managers, because of the pressure, would never have allowed.

“He didn’t care about what journalists, directors and the public said. He did what he thought was right. More than that, he was the formidable merit of going against the current. When everyone else worked on reinforcing the defence, Johan went for taking risks and spectacular football.”

Bergkamp swiftly made an impression in the first-team at Ajax and his talents were immediately evident, helping the club to European Cup Winners’ Cup success during his debut season before continuing to grow in stature.

He helped Ajax to league title success in 1989/90, before the goals truly started to flow as a new decade was ushered in. Bergkamp finished as the Eredivisie’s leading scorer in three successive seasons and was twice named as Dutch Footballer of the Year, before Europe’s elite came calling for his services.

Inter Milan were the side to win the race for the Netherland’s brightest young talent, the Nerazzuri seeking a statement signing as they looked to overhaul city rivals AC Milan as Italy’s most dominant side.

The nineties saw a who’s who of world football’s finest head to Serie A and the transfer seemed the perfect step for Bergkamp to push on towards the pinnacle of the game, but despite scoring 18 goals and winning the UEFA Cup during his debut season, it proved the wrong club at the wrong time.

His second season was disastrous and incoming president, Massimo Moratti, decided to move the forward on amid wholesale changes, with Arsenal concluding a deal to bring the Dutchman to the Premier League.

It proved an inspired move.

The £7.5m fee that took Bergkamp to north London was a British transfer-record fee – for a matter of weeks at least – and the hefty price-tag initially seemed to weigh heavy on the shoulders of the marquee arrival.

His slow start saw the ever fickle media begin to turn on the Dutchman as he toiled in front of goal, with the predictable jibes branding the forward a flop both widespread and premature. Those critics were somewhat silenced following a brilliant Bergkamp brace against Southampton, the star signing opening his account for the club in stunning style.

His first came after volleying home compatriot Glenn Helder’s deep cross to open the scoring, before putting Arsenal ahead once more after Southampton had fought back from two goals down to level, Tony Adams having earlier doubled the Gunners’ advantage.

Bergkamp’s second was a thing of beauty, picking up the ball just inside the Southampton half before embarking on a twisting and turning run into opposition territory. As the Saints continued to back off, the forward – confident from his earlier opener – let fly with an unstoppable effort, a powerful strike that crashed in off the post.

It proved to be the start of a love-affair between club and player.

🗓 Before we hosted Southampton #OnThisDay in 1995, Dennis Bergkamp hadn't scored for us and was being criticised by some…

…by full-time, those critics were silenced 🤫

Whilst it was Bruce Rioch who brought Bergkamp to English football, it was the arrival of Arsene Wenger at Arsenal that truly unlocked the genius of a phenomenal footballer.

The pre-Wenger Arsenal had been a side that prided themselves on defence resilience, a miserly backline the basis for their success, but the appointment of the unknown Frenchman proved the catalyst for a seismic shift in the club’s culture.

Wenger – whilst maintaining the remnants of that dogged defence – brought an aesthetically pleasing style and Bergkamp was the architect of a new era, the calm and calculated creator in chief of an emerging side.

Amongst the highlights of Wenger’s first season in charge was another piece of Bergkamp brilliance during an FA Cup tie against Sunderland at Roker Park, a majestic movement that saw the star spin away from two challenges before lifting the ball past the goalkeeper and into the far corner.

A Dennis Bergkamp goal so special it even left the great man himself speechless 😱🤐 pic.twitter.com/OaggZEgwOF

The early doubts surrounding Bergkamp’s suitability to the English game seemed like a distant memory ahead of the 1997/98 campaign, Wenger’s first full season in charge of Arsenal and one that saw Bergkamp cement his position as one of the Premier League’s finest footballers.

Bergkamp was a footballing artist and a player beloved by the purists, but far from the foreign fancy-dan some would believe, the Dutch international possessed a ruthless streak and cold and competitive edge.

Wenger had swiftly recognised the sublime skillset his number ten possessed and moved to build his side around Bergkamp, the star orchestrating a season in which Arsenal claimed a domestic double, scoring 22 goals in all competitions to be named as the PFA Player of the Year and FWA Footballer of the Year.

The opening month of the campaign saw Bergkamp deliver a month of magical moments and his performances remain in the history of the division, including this breathtaking hat-trick against Leicester, a treble many regard as the finest the Premier League has witnessed.

Bergkamp’s opening strike would belong in any collection of superb strikes after bending a delightful effort into the far corner following a short set-piece, before racing through to score his second in somewhat fortuitous circumstances.

His third in what proved to be a thrilling 3-3 draw, however, is a piece of unearthly genius that stands as a defining moment in a captivating career. David Platt’s lofted pass was killed instantly with Bergkamp’s right foot, before lifting the ball past Matt Elliott with his left – flummoxing the defender – and curling the ball past the helpless Kasey Keller.

Those goals were part of three for Bergkamp which finished as first, second and third in the Premier League’s Goal of the Month competition, a unique piece of history for a goalscoring great.

Arsenal were unable to repeat their title-winning performances the following year but Bergkamp remained in fine form, providing a league leading 13 assists as Wenger’s side finished as runners-up to Manchester United’s treble winners.

The moments of inspiration still surfaced, however, including this delightful dinked effort in an FA Cup fifth round replay against Sheffield United at Highbury.

Bergkamp had long taken interest in lifting the ball over opposition goalkeepers, stemming from playing youth football with goalkeepers in oversized goals, his penchant for chipped finishes remaining with him throughout his career.

He thrived on providing moments of inimitable ingenuity, finishes that others would not dream of attempting, let alone executing.

This effort against the Blades demonstrates the player’s desire to take unorthodox avenues to goal, the ball cut-back in his direction with pace by Ray Parlour. It’s perhaps no stretch to say that most players – inside the penalty area – would use the pace on the ball to generate added power towards goal.

Dennis Bergkamp, however, was not most players.

Like a golfer planted deep in a bunker, Bergkamp stabbed at the ball to lift a delicious dink over the visiting goalkeeper, a despairing dive grasping at little more than thin air as the ball drops delightfully into the net.

⏮ Throwing it all the way back to this Dennis Bergkamp classic in February 1999…#SHUARS pic.twitter.com/PJX5I6olow

Bergkamp helped Arsenal to a second domestic double during the 2001/02 season before forming part of the club’s legendary Invincibles side that won the title unbeaten two seasons later.

Our final offering comes during the first of those title winning seasons and is a goal that some regard as the greatest ever scored in the Premier League era, a moment in which time seemed to stand still as a modern genius produced an unforgettable piece of perfection.

The hours and hours spent mastering the spin of a ball resulted in this goalscoring zenith at Newcastle, a goal wrapped in instinct and intelligence to open the scoring against their title rivals at St James’ Park.

Robert Pires’ drilled pass inside fell behind the darting run of Bergkamp, only for the forward to readjust his body and cushion the ball with his left foot ahead of Newcastle defender Nikos Dabizas.

With the momentum of ball and player spinning in differing directions, Bergkamp rolls away from the Greek international before collecting his touch on the opposite side and finishing calmly, Dabizas bamboozled by Dutchman’s brilliance.

It’s a goal that epitomises the absurd technique and talent of the former Holland international and has not been replicated at Premier League level in almost two decades since, a breathtaking breakthrough in the North East that helped maintain Arsenal’s charge towards title success.

More than 17 years on, we're still wondering just how Dennis Bergkamp managed to do this 🤯#NEWARS pic.twitter.com/WG9CfixNIW

The statistics of Bergkamp’s career in English football make for impressive reading with three Premier League titles and three FA Cups amongst his major honours, his collection of silverware adding to a fine record of 120 goals in 423 appearances.

Bergkamp, however, fits into a category of players where tangible evidence offers only slight insight into his genius, a footballer who transformed the aesthetic of his side into his own captivating image, making those around him better players and seemingly playing a step ahead of opposition sides.

If Patrick Vieira was the beating heart of Arsenal and Thierry Henry their clinical cutting edge, it was Bergkamp who was undoubtedly the brain of an iconic side.

The Netherlands icon was celebrated with a statue outside of Arsenal’s Emirates Stadium and the bronze creation of the former hero fittingly portrays the striker cushioning a pass in flawless fashion, the fascination with the ball and its bounce a major part of what made the brilliant Bergkamp one of the Premier League’s greatest Golazo merchants.